4 PM, Sunday Update: EFSC officials are closely monitoring the track of Tropical Storm Ian, which is expected to become a major hurricane and impact Florida's west coast and other regions of the state including Central Florida. Now is the time to review preparation tips. Brevard County is distributing sandbags on EFSC's Palm Bay Campus in the north parking lot from 8 AM to 6 PM Sunday and Monday, which could impact campus traffic patterns. Updates will be shared here and via text and social media alerts as needed.

Due to a network software upgrade, access to EFSC online systems that require the Titan Sign In Portal, including myEFSC, Canvas and Microsoft 365 Email, will be unavailable from 4 to 6 AM on Monday, Sept. 26th. The short outage will affect on-campus and remotely connected users. 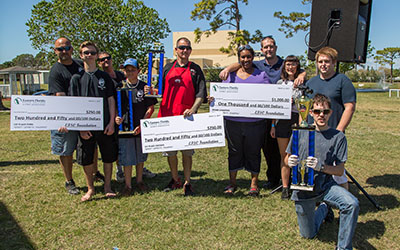 The winning teams of the 2017 Backyard BBQ Cook-Off
proudly display their checks and trophies.

The teams set up camp the evening before on the Melbourne campus and grilled through the night in hopes of winning the Grand Champion title.

The BBQ was evaluated by a team of judges from the college that included Dr. Larry Bishop, Dr. Sandy Handfield and Dr. Joe Lee Smith, along with Brevard County Sheriff Wayne Ivey, Chef Darren Durham and Kim Agee.

While the scores were tallied, hundreds enjoyed bluegrass music from the Penny Creek Band, while children explored bounce houses, face painting and games from Bounce Around Brevard.

A & M Mobile Bar Service provided beverages, and if patrons didn't get enough food samples from the BBQ teams, lunch from Memaw's BBQ was also served. 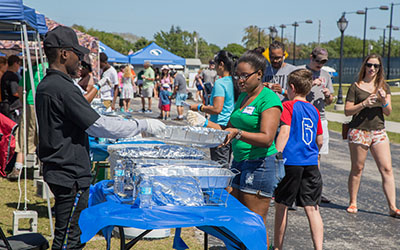 The crowd also had front row seats as the College’s men's and women's soccer teams scrimmaged, and the Lacrosse Club team showed off its skills.

A new gas BBQ Grill donated by The Home Depot was raffled for the first 100 people who pre-purchased their tickets, and was won by the Riley family.

“We were delighted to share our campus with the community, and are grateful for the support of our college students and athletes,” said Jennie Kriete, Director of the EFSC Foundation.

For more information on this and other Foundation & Alumni events, visit the Alumni Association events page.