Ron Vanderveer has a love of teaching that stretches back to his years as a SCUBA instructor, first in California and then in the Caribbean islands.

He was putting his bachelor's degree in marine biology to use in a very hands-on way during those years — an approach that influences his teaching style to this day as a Melbourne Campus biology instructor. 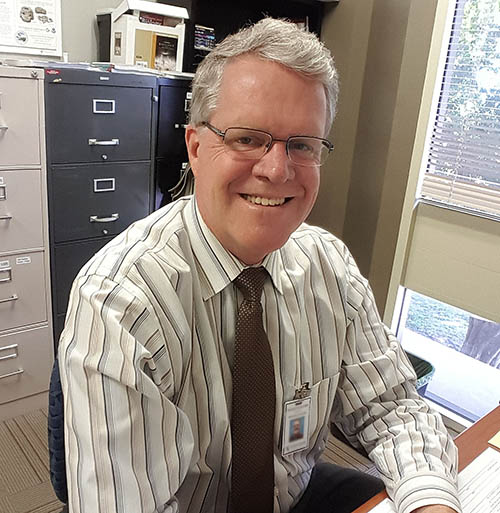 "I've rewritten a lot of the labs to make them more investigative and fun," says Vanderveer, who teaches biology courses for both science majors and non-majors. "For that non-major group they like the hands-on lab. I've looked for anything I can find that would break up the lectures — it might be an interactive element or something that lets them focus on exploration."

Vanderveer first taught oceanography for about nine years at Melbourne High School and then had a stint as a trainer at a local company before coming to the College, first as an adjunct and now as a full-time biology instructor since 2013.

"I've chosen to specialize in Fundamentals of Biology, with an emphasis on the non-science majors," he says. "I look at this as the last science class they are probably ever going to take so I want them to learn to think about biology."

Vanderveer, who also has master's degrees in general biology and  educational technology, put a lot of time and effort into structuring his curriculum to fit that audience.

"The most interesting change that I made is I moved all the assessments online except for the final exam. They take a quiz every week through Canvas," he explains. "The questions are going to be a little tougher since it's online and open book. They're going to have to think. I want them to use the vocabulary and not just memorize it. I'm proud because it's elevated the way students think and take in information."

His approach has led to some science converts.

"I've had about three students who've come back and told me they went back and took general biology (the more intensive course required for science majors) and started down a science path after thinking they did not want to go that way."

Inspiring students to consider a science career is rewarding but he says he never loses sight of that non-science major who's just checking off a box on their degree requirements.

"I'm not trying to make them scientists. I'm trying to make them functionally literate in the field of science so in 10 years when a family member gets sick or they run into a scientific issue at work they can think back and evoke what I taught them and go through their steps to figure out the issue."