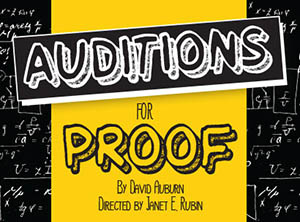 The new audition dates are as follows:

Winner of the 2001 Pulitzer Prize for Drama and the 2001 Tony Award for Best Play, the show explores the themes of love, mental illness and reconciliation as it tells the story of a young woman searching for the truth behind a mathematical proof’s authorship.

Roles are available for two men and two women.

For more information, contact Janet E. Rubin at rubinj@easternflorida.edu or 321-433-7171.