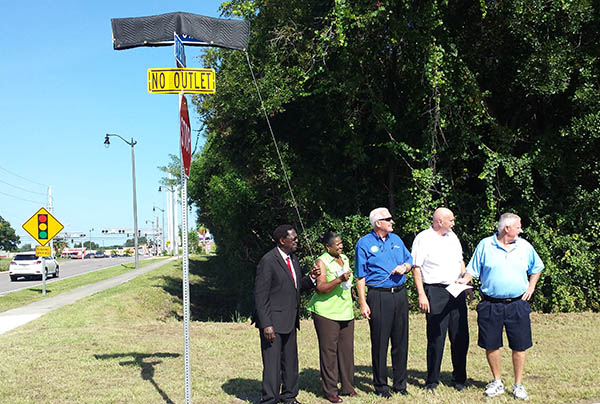 Dr. Joe Lee Smith prepares to unveil the sign for the
Rockledge street renamed in honor of his public service.

The portion of Edwards Drive south of Eyster Blvd. in Rockledge was renamed in honor of Dr. Smith by a City of Rockledge resolution. The new street sign was unveiled in a ceremony on September 2.

"Yesterday was a memorable day for me," said Dr. Smith. "I'm honored and thankful and appreciative and most humbled for this recognition and I will continue my community work because I get joy out of being a public servant."

Dr. Smith has lived in Rockledge since 1968 and was first elected to the city council in 1982, serving until November 2000 when he stepped down to pursue other interests. Within a year, he was once again running for the council and was re-elected in November 2001 and has served uninterrupted since.

He graduated from Monroe High School in Cocoa and went on to earn Bachelor's and Master's degrees from Florida A&M University and a Doctorate from the University of Florida.

He has had a distinguished career as an educator in Brevard, Broward and Dade counties.

Smith has served as director, dean and provost of Eastern Florida’s Titusville, Cocoa, Palm Bay and Melbourne campuses, and as executive director of the Moore Multicultural Center. He has also been a classroom teacher, coach, director of athletics, high school assistant principal and research assistant at the University of Florida. 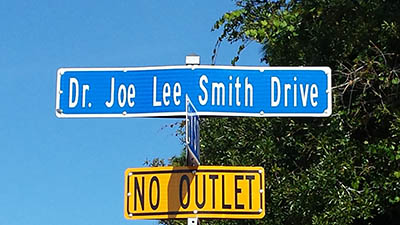 A Brevard County park and community center in Cocoa and a large classroom building on Eastern Florida's Melbourne Campus have also been named in Dr. Smith's honor.

He says he never imagined as boy growing up in Cocoa that he would be honored in such a public way and  that he and his wife Altamese were honored that so many people attended the street sign dedication ceremony.

"Our Rockledge city motto is 'preserving the past... planning the future" and in 30 years I've had something to with the past and hopefully I've influenced the future for generations and generations to come."