After being offered scholarships at Florida Tech, Covenant College, Georgia Tech’s Honors College and the University of Central Florida’s Honors College, Alissah was qualified to pursue full rides at each. She was in the process of making her decision when the family received a letter from the Academy, inviting Alissah to come to an orientation meeting.

“We had absolutely no idea how they got her name,” said Alissah’s mom, Kim McGill. But attend they did.

“Her mother and I tried really hard not to influence her,” said Jack McGill. “We felt strongly that it had to be her decision. After all, it means a nine year commitment.” 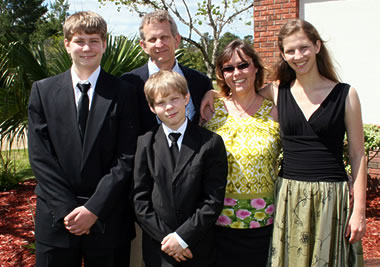 The process was daunting. Not only did she have to apply and re-apply, but she was immediately thrust into interviews with the nominations staff of U.S. Senators Marco Rubio and Bill Nelsen, as well as U.S. Representative Sandy Adams.

"We didn’t even hear it from the Academy,” said Alissah, who's pictured with her family. “We were in the car headed to an Irish Dance competition when she called. I couldn’t believe it. My mom had been watching the West Point Portal daily and hadn’t seen any postings. It was a real roller coaster. Mom and I just started crying."

A Brevard native, Alissah has been homeschooled since Kindergarten. Her mom, Kim, made the commitment early on, and also homeschools Alissah’s two brothers, T.J. and Ian. A well-rounded young adult, Alissah played violin and was involved in a number of activities such as soccer, swimming, tennis and her favorite — Irish Dance at the Myra Watters School of Irish Dance — where she earned many honors, including a championship.

Alissah is a member of Rotaract on the Cocoa Campus and served as historian. She’s an active member of the Writer’s Haven, and was inducted into the Phi Theta Kappa Honor Society on April 24. She is also a member of the Robotics Team 801 based at Merritt Island High School, and the National Society of High School Scholars.

David Hancock, a Student Development Specialist at the BCC Cocoa Campus, knows Alissah well and was thrilled about her appointment.

“It is likely a rare occasion for a BCC student to be accepted to West Point,“ he said. “We’ve been very impressed with her, and believe she will do well as she studies at the Academy.”

“We didn’t start this process,” added Kim McGill. “God did and we know he will finish it. It’s been interesting — the whole process — and in a way frightening. There’s a plan for Alissah’s life and it’s been awesome to see this all unfold.”

McGill plans to major in Linguistics and Foreign Affairs. As they graduate, West Point cadets are commissioned as a second lieutenant in the U.S. Army.