February 3, 2015 - Megan Nelson has placed in the International Illustrators of the Future art contest which focuses on fantasy and science-fiction themed artwork and writing.

Nelson's win in a quarterly stage of the contest includes a $500 prize. 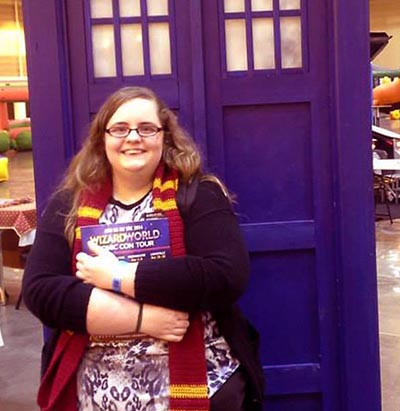 In the second stage of the contest, Nelson and the other winners of the art contest will be given one of the winning stories to illustrate. One of these 12 new illustrations will be chosen for the Golden Brush Award, which includes a $5,000 award.

Quarterly winners are flown to California for a week-long intensive workshop with the contest judges, who are award-winning illustrators and writers.

Nelson lives in Malabar with her family. After graduating from Palm Bay High School in 2009, she studied art at Eastern Florida State College, where she was awarded the 2013 EFSC Academic Award for Art.

Her student artwork was also included in two highly competitive Juried Student Art Exhibits, where the faculty unanimously awarded her the Faculty Choice Award. She was also honored with the Student Choice Award.

"Megen is a dreamer, but she's also a doer,” said Joanna White, Assistant Professor of Art at Eastern Florida. “She combines imagination with practical articulation. It's a magical combination. She's one of those people you are certain will succeed in life, because she is relentless in the pursuit of her goals."

Since graduating from Eastern Florida, Nelson continues to create and exhibit her personal artwork, as well as write and illustrate her own full length prose and graphic novels.

Her writing has also received honors, including a Poetry Slam short story award at Eastern Florida, and the Brevard County Teachers of English Writing Award.

She is currently studying English Literature at the University of Central Florida while creating freelance artwork commissions. Her long term goal is to complete a graduate degree in Digital Media, melding her love of storytelling to her love of artwork.

Information about her artwork and commissions can be found at www.arapersonica.com