January 9, 2017 - To acknowledge those who serve and protect the community each day, Eastern Florida State College is commemorating Florida First Responder Appreciation Week from January 9-13. 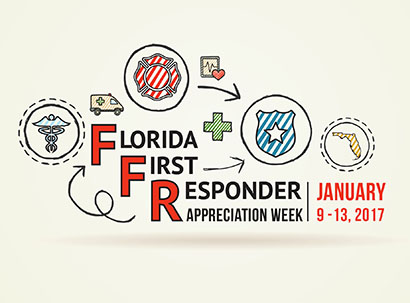 Florida Governor Rick Scott declared the annual observance and in a letter to colleges and universities around the state encouraged Floridians to show "gratitude for the brave men and women who serve our state's residents as first responders."

The observance is especially fitting in the aftermath of a particularly difficult year.

"When Pulse Nightclub in Orlando was attacked during the early morning hours of Sunday, June 12, 2016, Florida's brave first responders put their lives on the line to rescue the injured and prevent an even more horrific tragedy," wrote Scott.

"From law enforcement officers to fire fighters, paramedics and emergency medical responders, there is always someone we can call upon to protect us and our families in an emergency."

Within the EFSC community, special thanks are due to students working toward careers in the field, as well as the professional law enforcement officers who serve as Campus Security personnel.

EFSC first responders will be recognized during ceremonies on each campus during the week of January 9.

"The Hurricane Matthew emergency this past fall offered yet another example of how our security team is here to protect the Eastern Florida State College community around the clock," said EFSC Vice President of External Affairs and former Brevard County Sheriff Jack Parker.

"First responders are defined by their willingness to serve the public with skill and compassion. As we honor our team of professionals, we're also proud of the role the college plays in creating the next generation of first responders.”

First Responders will also be honored on each campus during the week of January 23 at EFSC's biannual Welcome Back event.