December 15, 2022 - Eastern Florida State College students celebrated the holidays in style Thursday during two Fall Commencement ceremonies that included two emotional walks across the stage, the first by a bachelor's graduate with cerebral palsy and the second by a Vietnam veteran who waited 50 years to pick up his diploma.

About 1,800 students were eligible to graduate with almost 180 walking across the stage during the first ceremony at the King Center for the Performing Arts on the Melbourne Campus. 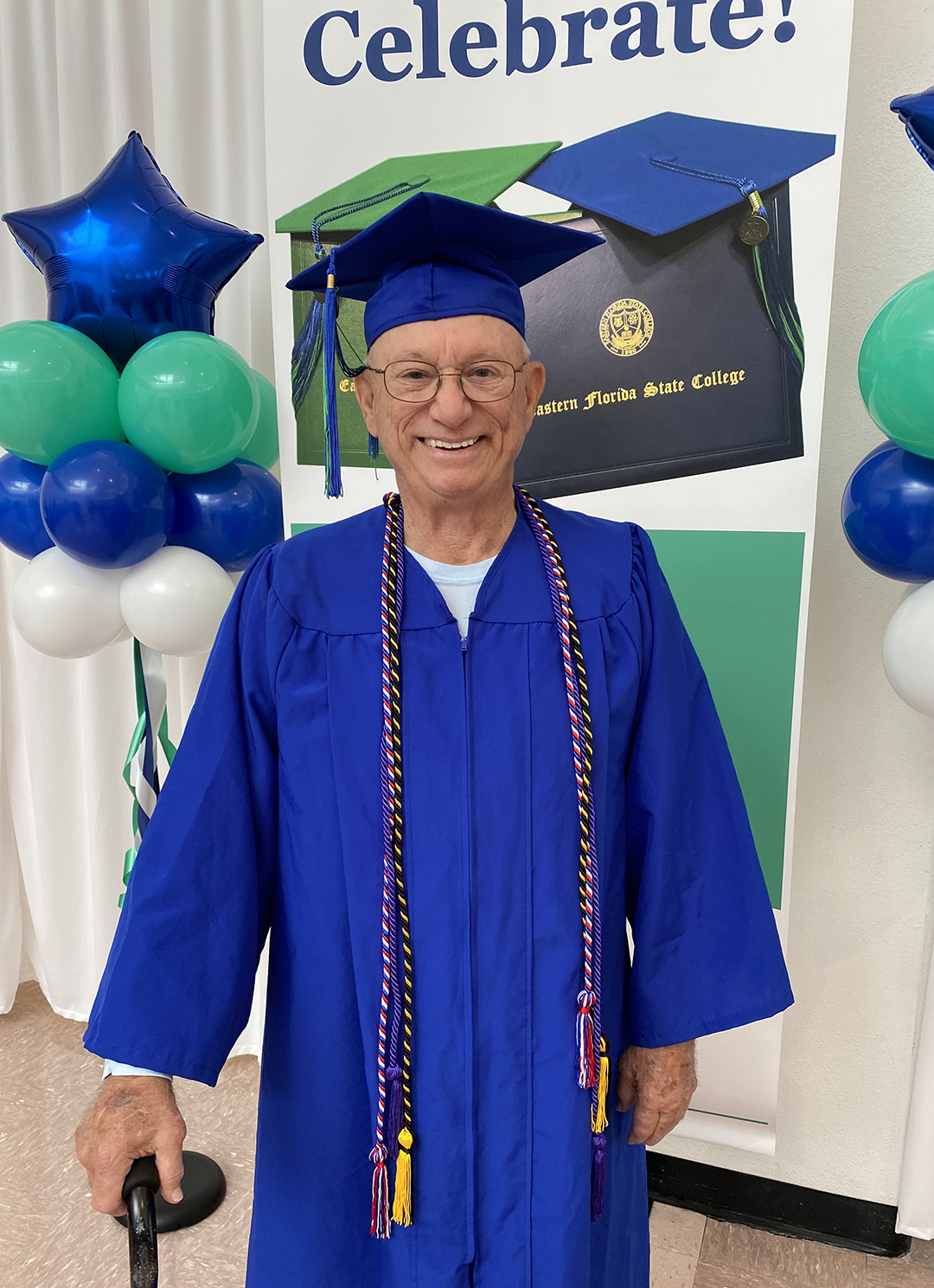 Among the graduates celebrated at 11 a.m. was James Steen, a decorated 76-year-old Vietnam veteran who finally picked up the Associate Degree diploma he earned in 1971. (Watch video of the full presentation to James Steen on our TikTok).

“It has been a long time coming. I never thought I’d get that piece of paper. It’s really a great feeling,” he said.

Steen attended what was then called Brevard Junior College in 1964-65 before he was drafted into the Army, trained as a helicopter pilot and sent to Vietnam in 1968-69 where he barely survived combat during some of the war’s fiercest fighting.

He was shot down in Cambodia while carrying special forces and dragged a comrade, who others thought was dead, through the jungle for three hours, dodging enemy fire before they were picked up.

Upon return to base, doctors found a pulse and the soldier was saved. Three years ago, the soldier found Mr. Steen through an internet and social media search and they reunited over the phone.

Steen was wounded in the leg and suffered other injuries, spending more than a month in the hospital. He received the Purple Heart and Air Medal with 23 Oak Leaf Clusters, each cluster representing 25 hours of flying in combat. 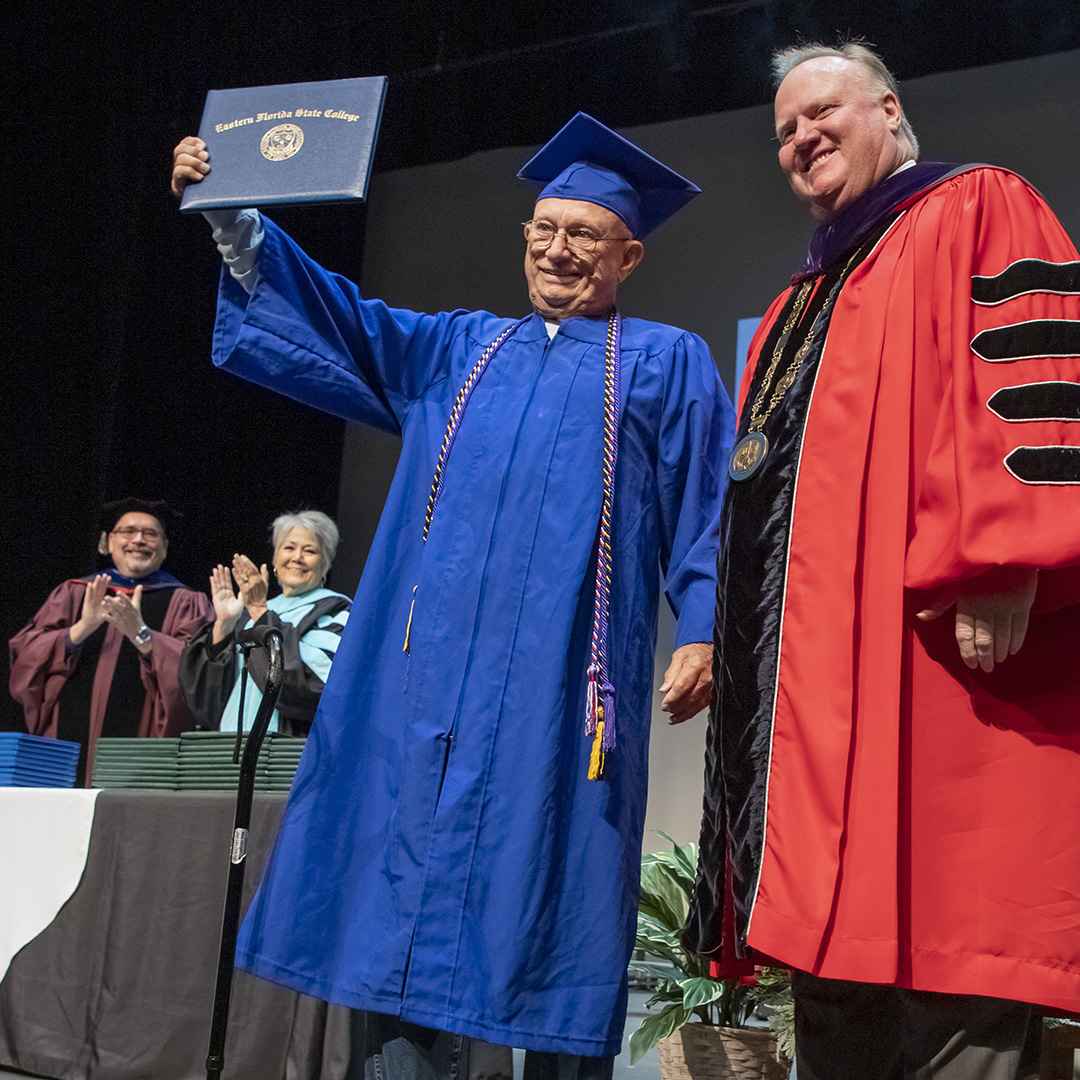 He returned to the college after he was discharged and earned his Associate in Arts degree, but did not apply to graduate then.

Earlier this year, Steen walked into the college’s Military and Veterans Center on the Cocoa Campus because he wanted to take a computer course. When the staff heard his story, they found his records and supplied him a cap and gown for Thursday’s ceremony.

“They we’re just incredible. I can’t thank them enough for everything they have done,” he said, choking back tears, which also started to flow as he walked across the stage to cheers and a standing ovation before standing with EFSC President Dr. Jim Richey for special recognition.

The Fall 2022 semester also saw EFSC reach a milestone with more than 3,000 students now having earned their Bachelor Degrees since the college first started offering four-year programs in 2013.

Among those newest bachelor grads is Justin Miller who was born with cerebral palsy and rose out of his wheelchair to walk across the stage unassisted as he received his Bachelor of Applied Science in Computer Information Systems Technology with a specialization in Cybersecurity. 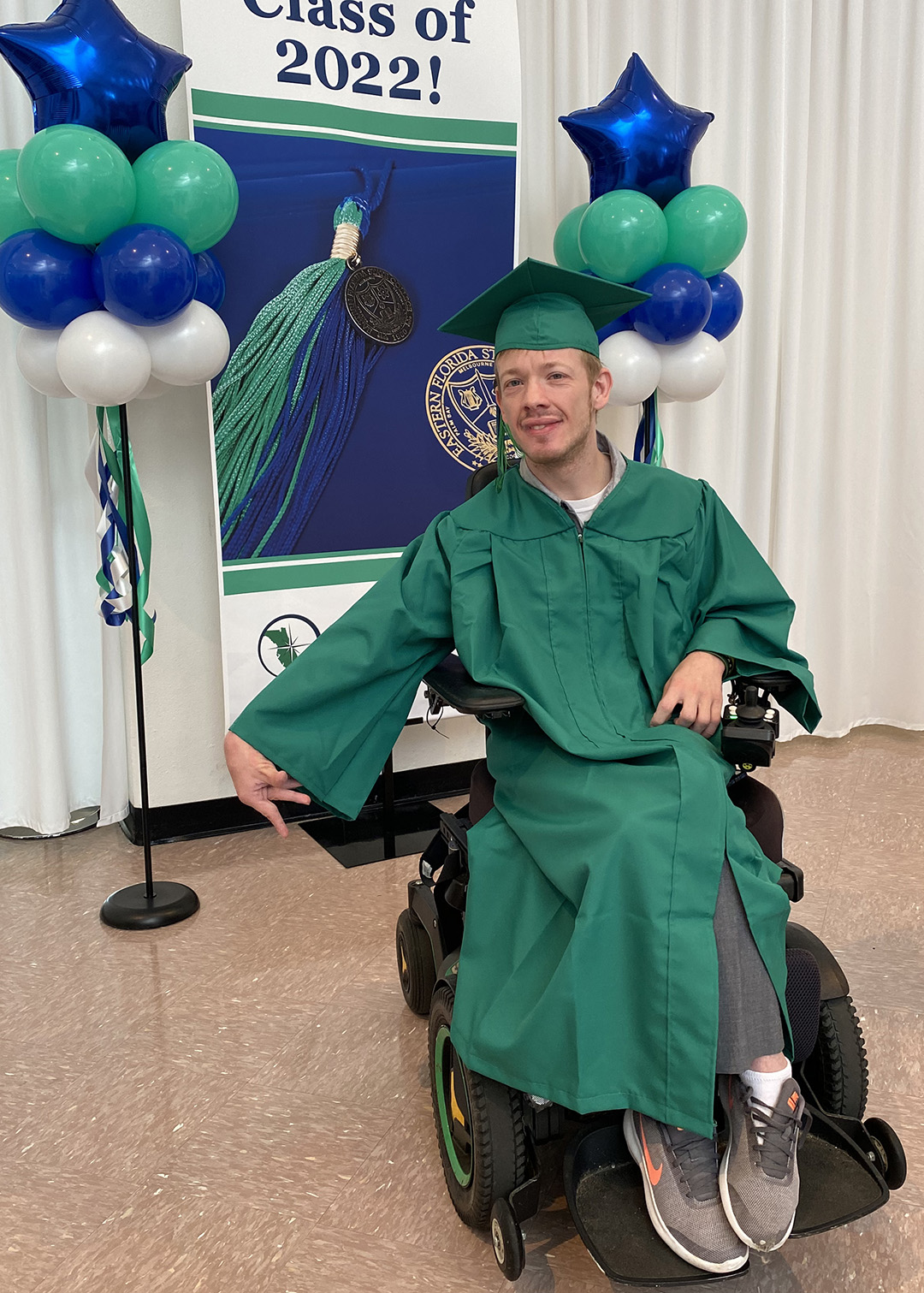 It's the 28-year-old Melbourne campus student's second EFSC degree after earning an Associate in Arts, and in both cases relying on the support of the team at EFSC's Student Access for Improved Learning (SAIL) office, which coordinates accommodations for disabilities at the college.

"EFSC is open to accessibility. Some colleges we would visit I couldn’t even get into the admissions building because they didn’t even have ramps," said Miller, who plans to get a job in the cybersecurity field and eventually earn a Master's degree.

He encouraged others with a disability to connect with organizations like SAIL and find a way to fulfill their dreams. 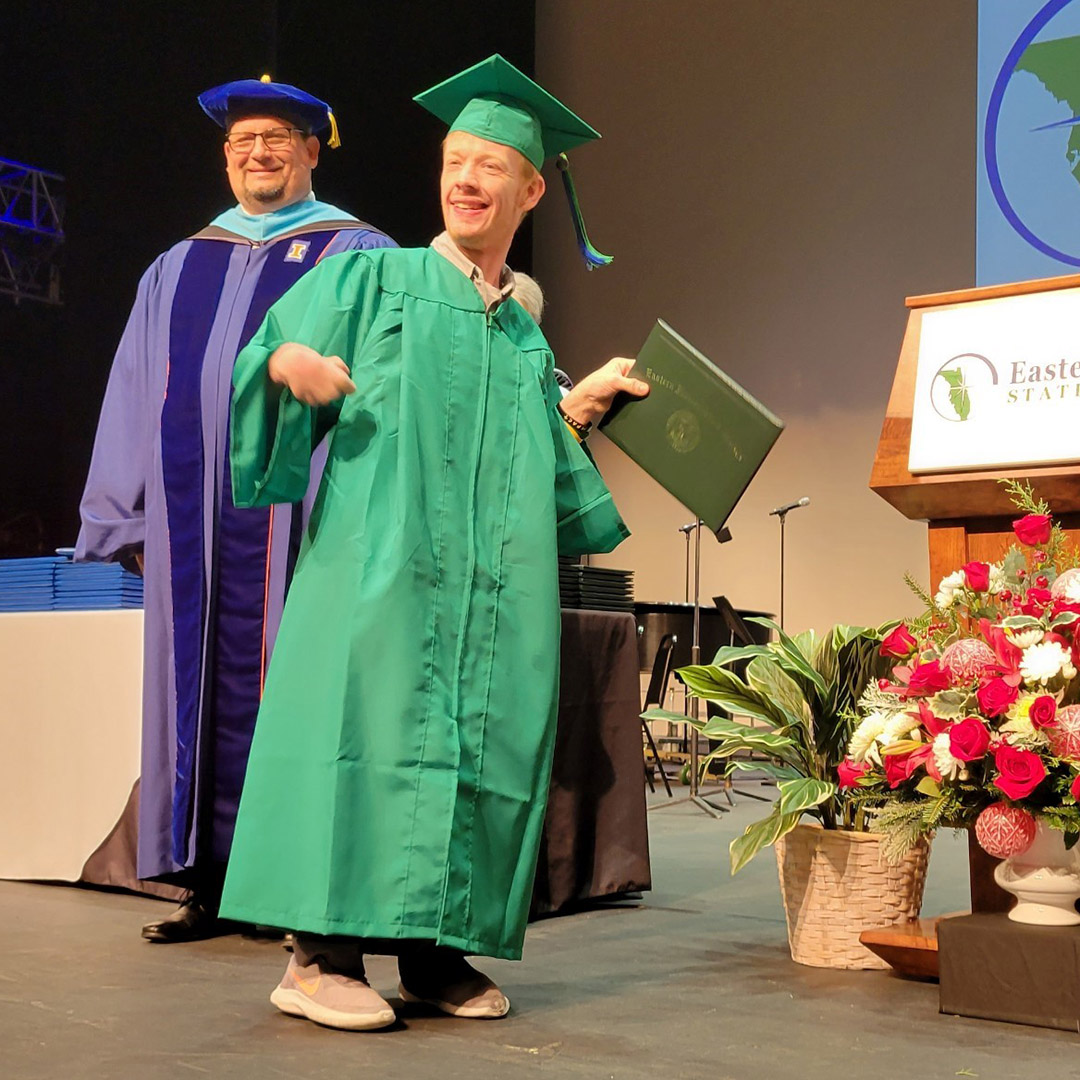 Justin Miller walked unassisted across the stage to receive his bachelor degree after rising from the wheelchair he normally uses due to cerebral palsy.

College President Richey saluted all the graduates for their perseverance in meeting their goals during his graduation remarks.

“I cannot begin to say how proud I am of you, and the lasting contribution you have made to our college and community through the example you have set,” said Richey.

“Whatever career you have chosen, your journey ahead will be filled with excitement and challenges, rewards and setbacks, certainty and unknowns.

“Move forward with a steadfast determination that never wanes and that will lead to success in ways you cannot yet imagine. Your dreams are within reach. Grab them and never let go.”

Among those accomplishing their goals this fall were mother and daughter graduates Catherine and Jennifer Day, who live near Tallahassee and both completed their degrees through Eastern Florida Online. 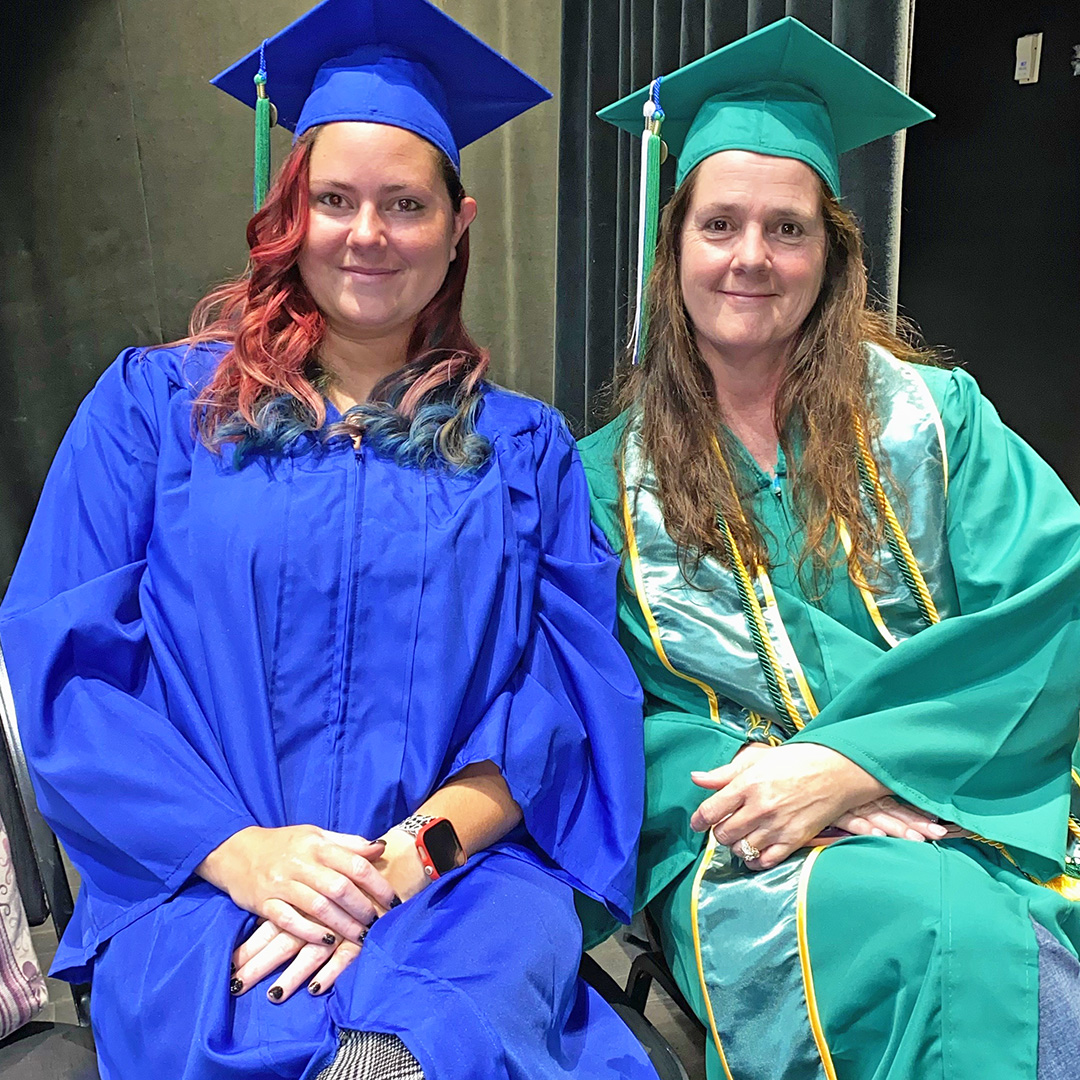 29-year-old Catherine earned an Associate in Arts and will continue at UCF in Special Education and mom Jennifer completed a Bachelor of Applied Science in Organizational Management and plans to start a graduate program at FSU.

"We would study together and I asked her when she was going to be done and I said, you know what I am going to hold my last class and that way we can walk together," said Jennifer.

Her daughter Catherine says she wore a specially decorated cap with her gown that said, "'I almost gave up, but I remembered who was watching.' Because I work with disabled young adults and we always push them for success, and it doesn’t matter what your success looks like. It is still success," she said.

Commencement ceremony replays can be viewed on the College’s YouTube channel at bit.ly/efscwatch.

Graduates, family and friends are encouraged to post their photos and videos from the day on social media using the hashtag #EFSCGrad so they can be part of the virtual social wall.

The students join more than 125,000 other graduates who have earned their diplomas from the college since it opened in 1960.

To learn more about EFSC and the programs it offers on four campuses and online, visit easternflorida.edu.