Laura Moody Appointed to EFSC Board of Trustees

Moody is the Chief Legal Counsel for the Brevard County Sheriff’s Office and replaces Alan Landman, who served in leadership positions on the board since 2009. 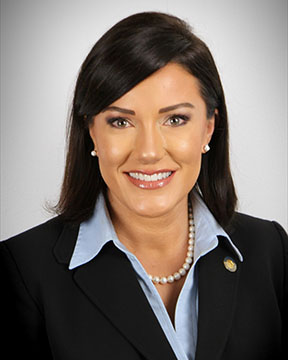 “Laura brings a distinguished career to EFSC that will benefit the college, our students, and our entire community in important ways. We’re excited to have her join us and play a key roll in helping guide us forward,” said EFSC President Dr. Jim Richey.

Richey also thanked Landman for his service, saying “his exceptional leadership was instrumental in transforming EFSC into a state college and starting a wealth of new programs and degrees that are giving students excellent careers.”

Moody earned her bachelor’s degree from Flagler College, a master's degree in public administration from the University of Central Florida, and a law degree from Florida A&M University.

She joined the Sheriff’s Office in 2019 as Legal Counsel after serving as an Assistant State Attorney since 2007.  In that role, Moody functions as in-house counsel for Sheriff Wayne Ivey and his staff.

Moody is responsible for researching and training on legislative and case law updates; legislative proposals; litigating asset forfeitures, and risk protection orders; in addition to other legal matters in which the Sheriff’s Office is a party.

She also works with the State Attorney’s Office, Judiciary, and other elements of the local criminal justice system, and coordinates with outside counsel on specialized assignments.

Her history with the Office of the State Attorney began in 2000 working in a Juvenile Diversion program, and as a Victim Advocate before attending law school in 2004 where she graduated from Florida A&M as Valedictorian in 2007.

In addition to her work at the Office of the State Attorney, Moody served as the Treasurer for Brevard County TRIAD from 2013-2018, as an Advisory Board member for Senior Resource Alliance, and as the Vice Chair of the 18th Judicial Circuit Bar Grievance Committee. She is a member of the Florida Bar, the Brevard County Bar Association,  and currently serves on the Board of the Vassar B. Carlton Inn of Court in the capacity of counsel.

In 2014, she was part of the Legislative Task Force that successfully passed HB 409, “Offenses against Vulnerable Persons,” which greatly enhanced the possibility of successful prosecution of crimes against the elderly.

Moody’s appointment is subject to confirmation by the Florida Senate.