An artist's rendering shows the new main entrance from Clearlake Road to the EFSC Cocoa Campus and the STEM Building for science classrooms and labs included in an $87 million 10-year Master Plan.

April 11, 2022 - Eastern Florida State College announced the start of a new era Monday for its Cocoa Campus with a plan to invest $87 million to build new academic buildings, student housing and make major improvements to the campus grounds.

The master plan was presented to the EFSC Board of Trustees, with college officials saying it will ensure the campus is a vital center for higher education into the future with a focus on programs for high-technology careers and general education.

The investment is the largest planned capital outlay the college has ever made on any of its four campuses.

“It’s an exciting, once-in-a-generation opportunity to reimagine the campus’ role and what it can provide to students, Space Coast industry and the Cocoa community. I’m thrilled about its future. It’s going to have a significant impact and benefit everyone.” 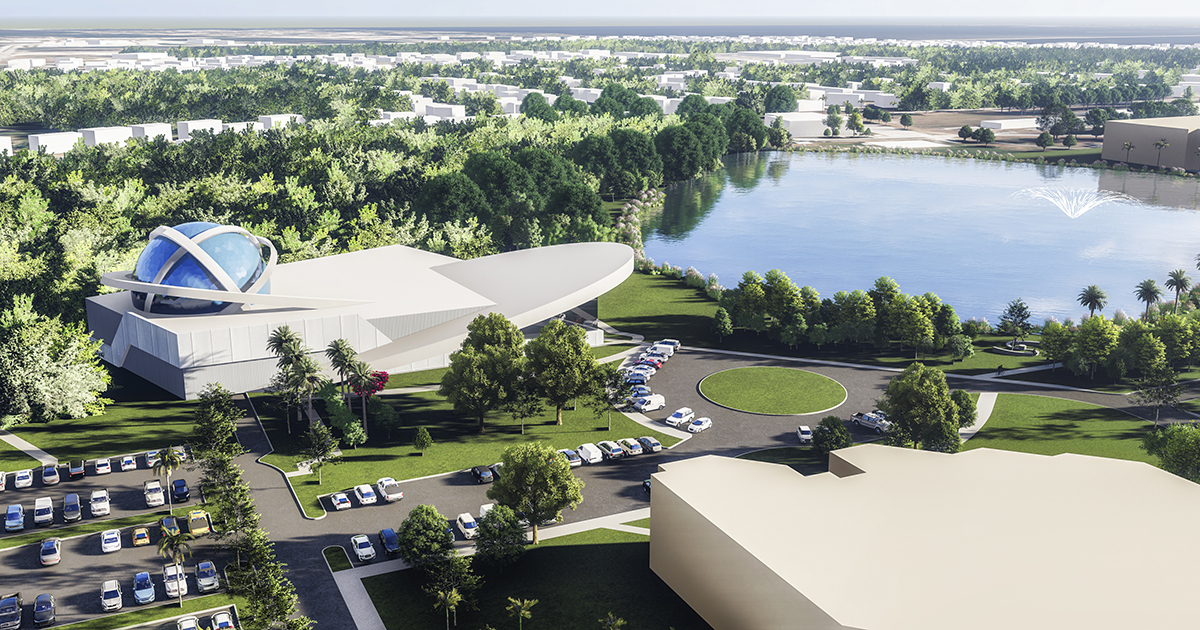 The 10-year plan, illustrated in this video, is the result of nearly a year of work that included input from students, employees and local residents.

The highlight is $87 million in new facilities for fields such as aerospace technology, engineering technology and advanced manufacturing. New and renovated buildings will also house classrooms and labs for healthcare, science and other programs.

In doing so, the plan reflects the workforce needs of area businesses and industry for highly skilled employees, including commercial space companies at Kennedy Space Center, other high-tech firms and healthcare providers.

The campus will also stay true to its long-standing mission for general education that allows students to earn a two-year Associate Degree before embarking on a firm career path or moving on to a Bachelor's program at EFSC or other colleges and universities. 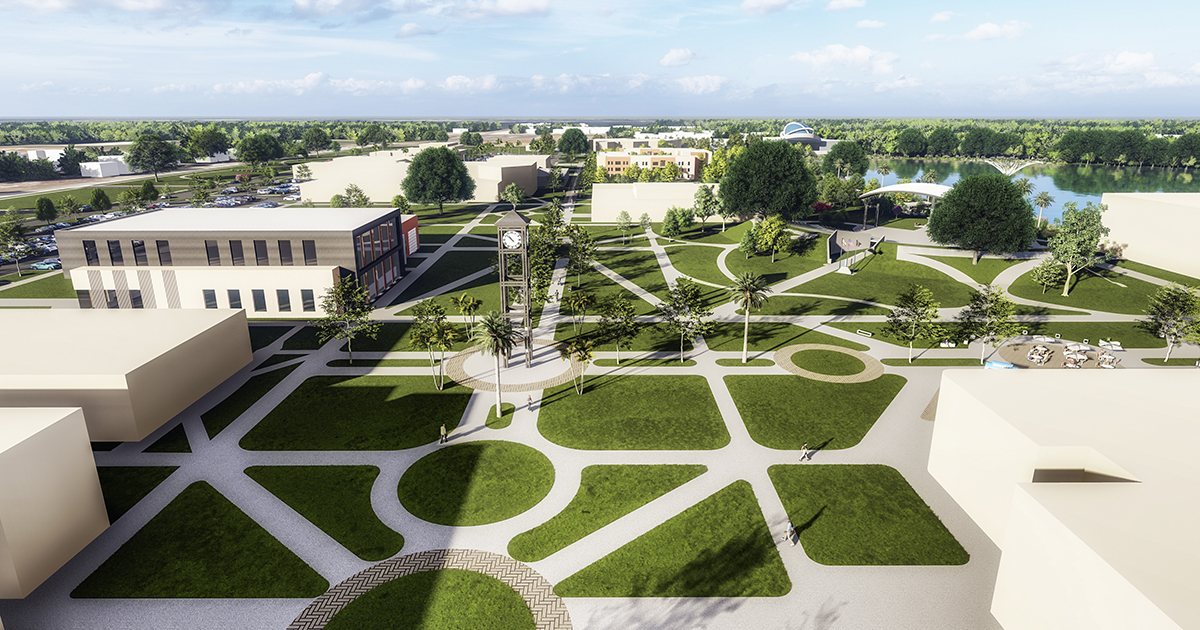 The Cocoa Quad will be reimagined with a new Advanced Technologies building seen center left and a revitalized amphitheater.

Most of the funding for the projects is being requested through appropriations from the Florida Legislature and follows $22 million the college has spent in recent years on a range of Cocoa campus upgrades.

Some of the master plan work is already underway with the college spending $1 million this year to repaint campus buildings and improve landscaping.

Here is a look at the projects and their cost:

“The new facilities will be state-of-the-art, giving students access to the best technology, equipment and labs, making them the go-to place for learning,” said Richey. 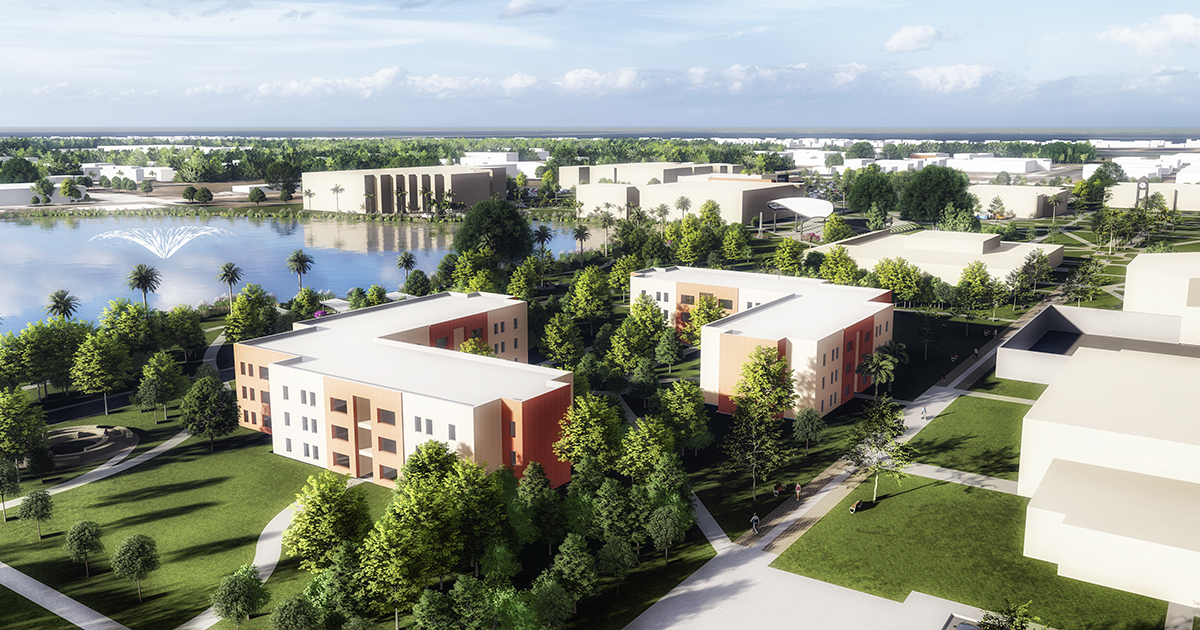 Two L-shaped student housing buildings shown in this artist's rendering would be built along the southern edge of Clear Lake where an old gym and pool are slated to be razed.

He also said the Student Housing “will make Cocoa a destination campus where students can live and study,” noting Student Housing apartments on the Melbourne Campus are highly successful with wait lists to move in.

The campus will remain home to key collegewide services for the Cocoa, Melbourne, Palm Bay and Titusville campuses.

Among them are the Career Planning and Development Center that prepares students for the job market; Military and Veterans Service Center that assists veterans, their families and active duty service members; Financial Aid; Information Technology; Human Resources; the Registrar's Office and Accounting.

Furthermore, the campus will continue to host initiatives such as the Pentagon-sponsored Advanced Composites Learning Center that trains technicians in innovative technologies for the Space Coast’s aerospace and defense industries.

To make way for the new facilities, old structures that date to the mid-1960s, are badly deteriorated and at the end of their useful lives will be razed. They include two classroom buildings and a gym and pool formerly used by the Central Florida YMCA.

The planetarium will also be demolished after an engineering study conducted following Hurricane Irma found serious safety issues. Plans to raze the four structures and pool are currently underway.

“The master plan is a real game-changer that will spotlight the Cocoa campus in new and vibrant ways. I can’t wait to see what it will look like when completed,” said Richey.