Watch the full presentation on the EFSC YouTube Channel

March 1, 2022 - Winston Scott shared his inspirational journey from the segregated schools of his youth in Miami to high-flying NASA astronaut and Naval aviator in a presentation that wowed the crowd watching the Simpkins Speaker Series event Tuesday on campus at Eastern Florida State College and online. 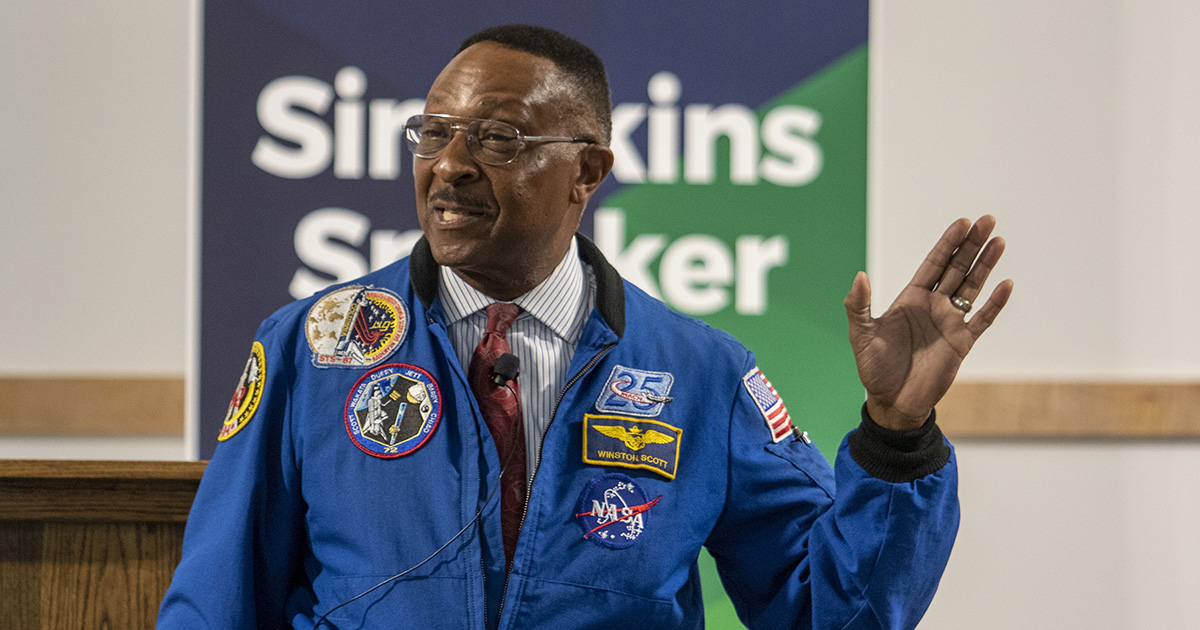 Scott took those watching on a multi-media tour of his U.S. Navy and NASA careers, which included serving as mission specialist on two shuttle missions in 1996 and 1997, during which he performed three challenging spacewalks that totaled almost 20 hours outside the orbiter.

The event was held at the Melbourne campus Student Union and livestreamed via YouTube to other EFSC campuses and the public.

Scott shared what it was like growing up in the segregated section of Miami's Coconut Grove where he attended segregated schools through 9th grade, wrapping each recollection in a lesson about overcoming obstacles.

"The shop class at the all-Black school had no equipment to build anything. Not having equal equipment was an obstacle, but our excellent teachers made up for it," said Scott as he described how his 5th grade teacher taught the class to calculate the speed of a light-year, the distance light travels in a year.

"Obstacles are going to come to everybody. Young people who are listening, you are going to have obstacles, that is part of life. The key is how you address those obstacles — you don't give up and you push forward."

Scott was among the first group of Black students to integrate Florida State University, where he earned a bachelor's degree in music education before getting his Master's Degree in aeronautical engineering from the United States Naval Postgraduate School.

After leaving NASA, Scott served as Vice President of Student Affairs at FSU and Executive Director of the Florida Space Authority. He retired from his position as Senior Advisor to the President for External Relations at Florida Institute of Technology in April 2021 and currently serves as Faculty Emeritus and is also on the Eastern Florida State College Board of Trustees.

Scott's 1997 shuttle mission included the late Gen. Leonid Kadenyuk, the first astronaut of independent Ukraine, who was pictured in a crew photo Scott shared in his presentation.

"I point that out because we are flying in space together. The folks on the International Space Station, the Russians are up there, Americans are up there and all of that is going along harmoniously while we have the turmoil going on down here," said Scott.

He described the joys and hard work involved in his astronaut career and shared his most vibrant memory from the experience.

"There are no words to describe what the Earth looks like from space. Photos do not do it justice," he said. "It's colorful from space, even the desert that just looks brown on Earth. From space, the planet is calm and peaceful. If you turn on the news all you see is turmoil, but from up there it's peaceful and you see no boundaries. Because it's so small and fragile you'd like to see us do a better job taking care of our planet." 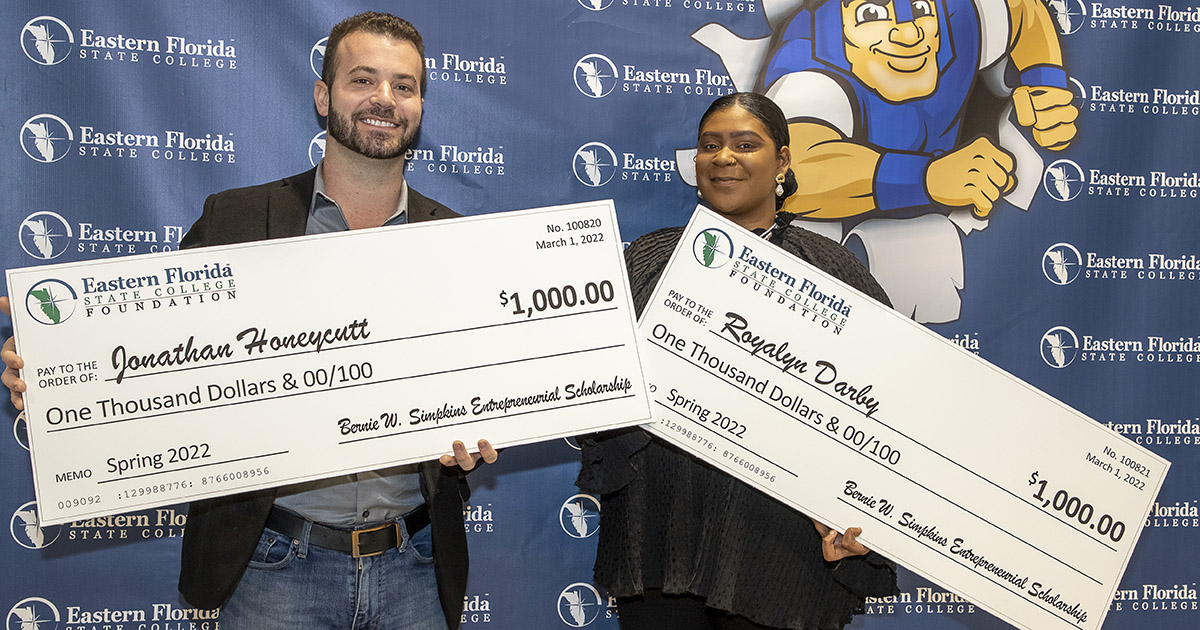 The spring Simpkins Series speech included awarding two EFSC students with $1,000 Bernie W. Simpkins Scholarships for excellence in the classroom and their endeavors as young entrepreneurs.

Recipient Jonathan Honeycutt plans to graduate in May with a bachelor's degree in Organizational Management from EFSC and continue his entertainment industry entrepreneurship, which includes performing as a singer, drummer and guitarist plus organizing music at corporate events as the owner of Hot Pink Music.

"The lifestyle of a business owner is not for the faint of heart," wrote Honeycutt in his winning essay. "While I have worked more traditional '9-5' jobs in the past, I have found entrepreneurship to be much more rewarding, both in my personal life and by financial means."

Royalyn Darbry is pursuing an Associate in Arts degree at EFSC while also starting a clothing line that aims to give back to the community by teaching others how to dress for success in the workplace at an affordable price.

"I want to encourage young men that they are able to do great things in life with not only the correct wardrobe but also teach them the fundamentals of working," wrote Darbry in her scholarship essay.

The Simpkins Speaker Series and endowed scholarships are named after the late Bernard Simpkins, a highly successful entrepreneur and Brevard County business leader who established the sessions that have brought some of the nation’s top business innovators to EFSC.