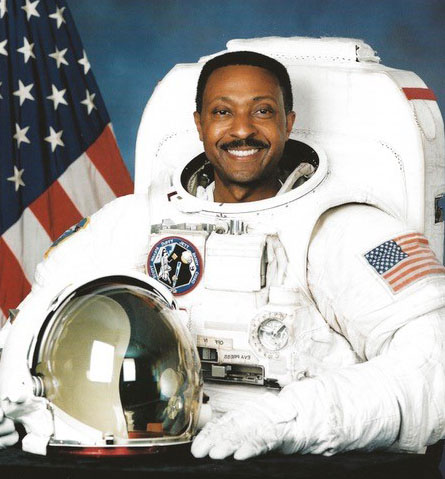 Winston Scott has had a remarkable career that has taken him from the Miami of his youth to the stars — an inspirational journey he’ll share at Eastern Florida State College as the next participant in the Simpkins Speaker Series.

The event, which is free and open to students, college employees and the public, will be held March 1 at 9:30 a.m.

People can attend in-person on the Melbourne Campus in the Student Union, Bldg. 16, second floor or watch via livestream on the college’s @easternflorida YouTube channel.

On-campus watch parties will also be held at these locations:

Scott, of Melbourne, is a member of the EFSC Board of Trustees. He retired from his position as Senior Advisor to the President for External Relations at Florida Institute of Technology in April 2021 and currently serves as Faculty Emeritus.

He graduated from Florida State University and earned his wings as a Naval aviator in 1974. He flew the F-14 Tomcat and F-18 Super Hornet fighters and 20 other military and civilian aircraft, accumulating more than 5,000 hours of flight time and making over 200 shipboard landings.

He was selected as a NASA astronaut in 1992 and flew on two space shuttle missions in 1996 and 1997, logging more than 24 days in space and conducting three spacewalks with nearly 20 hours outside the spacecraft.

After leaving NASA, he served as Vice President of Student Affairs at Florida State University and Executive Director of the Florida Space Authority, where he helped open the space industry at Kennedy Space Center to commercial companies such as SpaceX and Blue Origin.

Scott earned a Bachelor's Degree in music education from FSU and his Master's Degree in aeronautical engineering from the United States Naval Postgraduate School.

The Simpkins Speaker Series is named after the late Bernard Simpkins, a highly successful entrepreneur and Brevard County business leader who established the sessions that have brought some of the nation’s top business innovators to EFSC.

The series also includes the presentation of the Bernie W. Simpkins Scholarship to EFSC students with an entrepreneurial focus.