August 9, 2021 - Alan Landman was named to another term Monday as chair of the Eastern Florida State College Board of Trustees in a unanimous vote.

He has been on the board since 2009 and previously served as chair several times during his tenure.

“It’s an honor and a privilege to hold this position. EFSC is a great institution with a strong focus on the students and community we serve thanks to the dedicated faculty and staff. Our future is exceptionally bright,” said Landman.

Ronald Howse was re-elected as Board of Trustees vice chair.

Trustees also honored former board member Moses Harvin Sr. who served from 2011 until earlier this year. 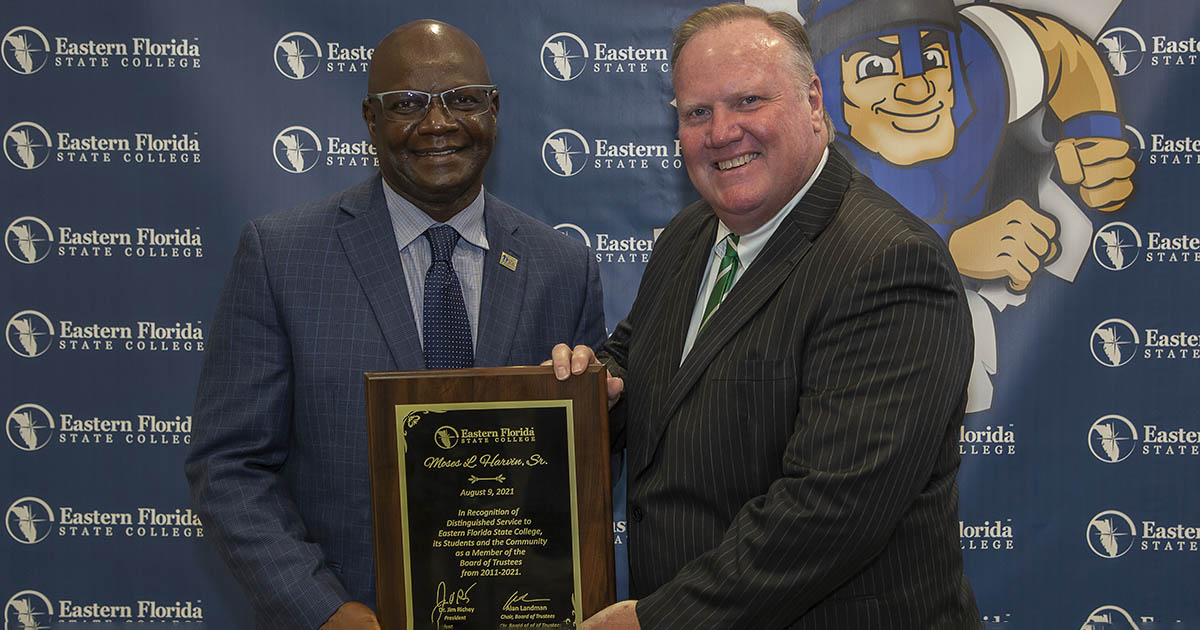 EFSC President Dr. Jim Richey, on the right, presents a plaque to Moses Harvin Sr. honoring his 10 years of service as a college trustee.

“You will not find a more committed advocate of higher education than Moses, who put his heart and soul into his role as a trustee in the most admirable way, always focusing on what students needed to grow and succeed,” said Landman.

During their time on the board together, Landman and Harvin were instrumental in transforming the College from Brevard Community College to Eastern Florida State College with a new name and greatly expanded mission in 2013.

They also oversaw the launching of more than 60 new academic programs, including the first Bachelor Degrees in the college’s history that have grown to 25 tracks in healthcare, business, computer technology and education.

“I valued his advice and counsel a great deal, admired his passion and leadership and am grateful for the chance to have worked with him. His service has benefited everyone at EFSC and in Brevard  County and is something we will never forget,” said Richey.