November 19, 2020 - Daymond John, star of the hit TV show “Shark Tank,” told hundreds of viewers watching online today that his hip-hop apparel brand FUBU was not an instant success and took years of hard work and failures before it finally made him a millionaire. 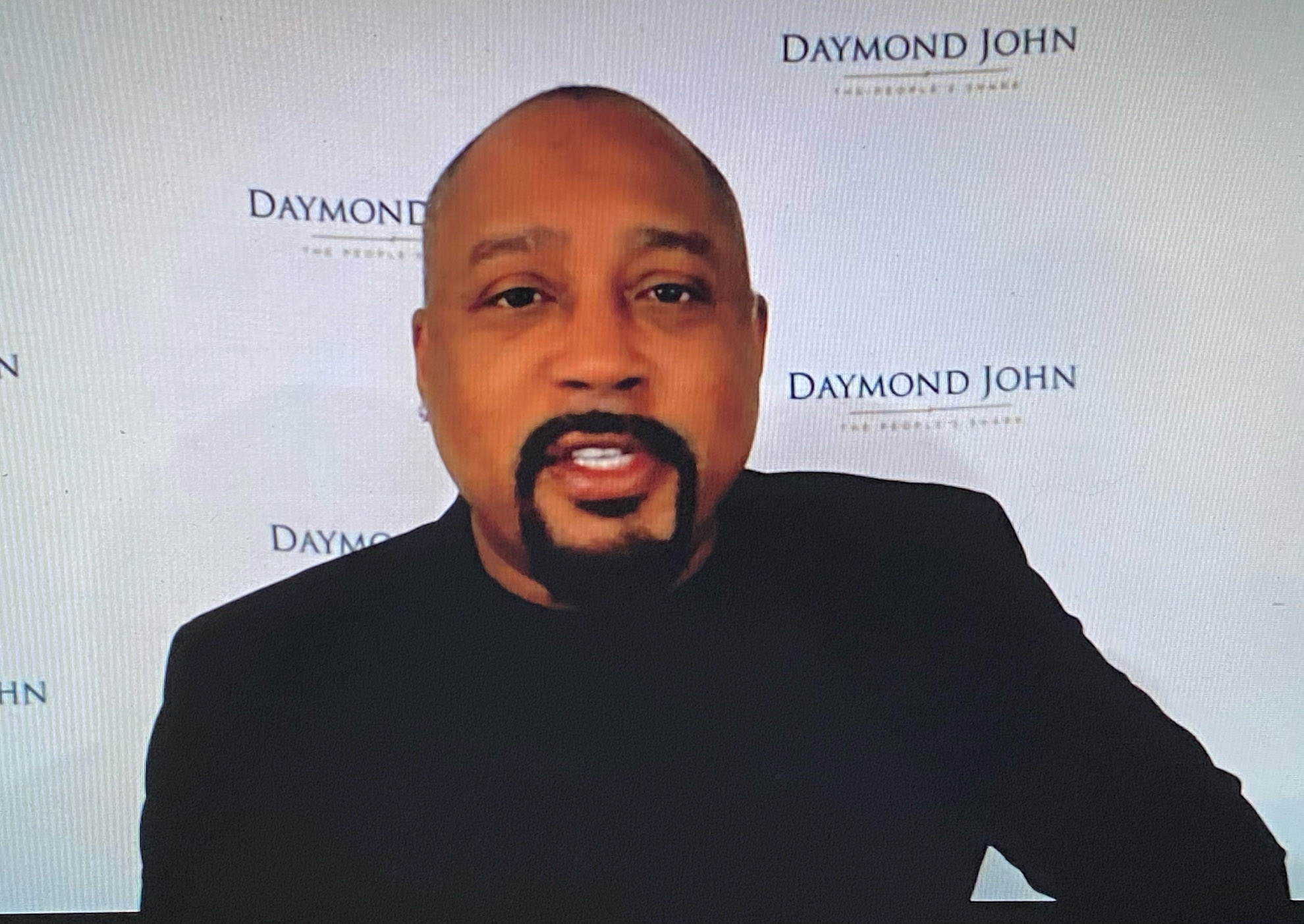 John, who in addition to being Founder/CEO of FUBU is also CEO of The Shark Group and a Presidential Ambassador for Global Entrepreneurship, shared his tips for success as part of the Eastern Florida State College Simpkins Speaker Series, held virtually this fall in partnership with the L. Gale Lemerand Entrepreneurial Speakers Series at Daytona State College.

“I started FUBU in 1989. I had to close it three times because I ran out of capital. But that is where I see true success in entrepreneurs, they act, they learn and then they repeat," said John during the online conversation.

"My three other partners came around in 1992 and we lived out of our house, selling clothes in the daytime and I worked at Red Lobster 8 to 10 hours a day and then would sell FUBU for 8 to 10 hours a day and I did that for five years. We finally got some recognition in 1997 after a lot of ups and downs. But I had a passion for it and so I worked at it, but I kept my day job because I had to pay the bills.”

John built his brand before the huge growth of social media and told the online audience that he had to rely on a different type of influencer to get FUBU's apparel noticed.

“Influencers don’t necessarily need to be the Kim Kardashians of the world. Every single person watching right now has influence over other people. I only had a couple of dollars left to make shirts. I realized if I gave it to the cool kids in the neighborhood, they may wear it once or twice and throw it away,” said John, who was living in Hollis, Queens at the time, the New York neighborhood made famous by the rock group Run-DMC.

“So I took 50 shirts and made them in 4-X, 5-X and 6-X sizes in black because black is the number one selling shirt, however the larger guys in the neighborhood never had a place to buy fashionable clothes. So I gave the shirts to these big guys and realized they had a limited choice of fashionable goods, so they would wear it 10 times a month and they were positioned at the red ropes of clubs, at stages during concerts and they were bodyguards to the artists I was trying to get to. As they kept wearing it, the music artists would start asking about the shirts. I made those guys feel special and they became ambassadors. That worked for me.”

“Whether it is balancing a checkbook at home or balancing a Fortune 100 company, financial intelligence is important,” John said. “Business is simple, you either increase sales or reduce costs. Financial intelligence is crucial, they do not teach that when we are in first and second grade so if you are brilliant enough to learn that later, do it. The story of FUBU is great, but I closed it three times and even when I did get some capital I was once again down to $500 and about to lose the house because I didn’t know how money worked.”

He pointed to his most successful Shark Tank investment, Bombas socks, which gives away a pair of socks to those in need for every pair sold, as an example of another top requirement when he's hiring or investing: being a good person.

“I am looking at the person. I want to know if that person and I have the same moral compass. It is the same as someone I employ, I look for a great resume, but after the resume the reality is, do I like you, do I want to sit next to you on Zoom or in person eight hours a day, five days a week for the next five years of my life. Can I communicate with you? The only thing more important in business than the number is the person.”

He shared how he researches potential hires and interns through their social media accounts, and that it's more important than ever for students to think about what they post online.

The chance to see and hear John through the virtual event made a big impact on EFSC student Johan Russell, who watched in a small, socially distanced gathering on the Cocoa campus that included staff mentors from EFSC's Minority Male Initiative.

Russell, who is also the VP of the Cocoa Student Government Association, said he will remember John's advice to, "Quit your day job for your dream only when your dream is bringing in more income than your day job."

John wrapped up the online event by advising viewers to see the life-changing impact of the COVID-19 pandemic in a different light. 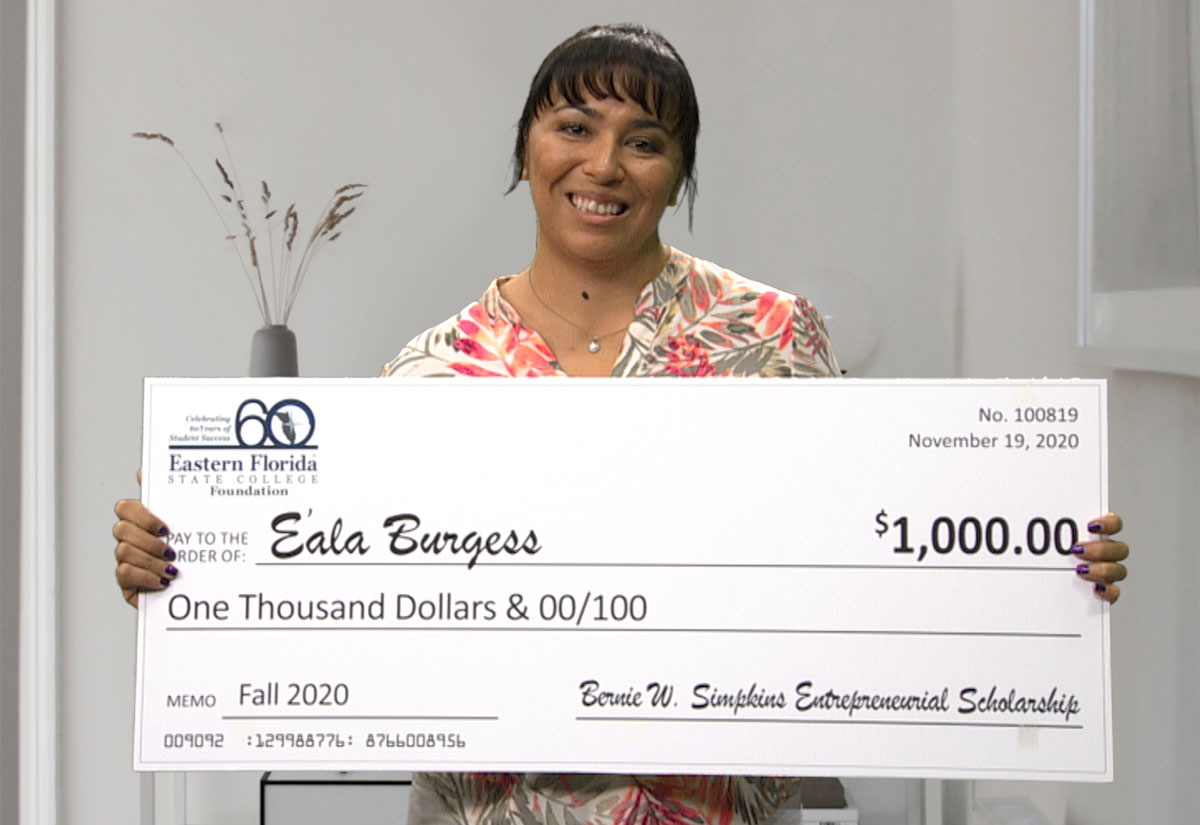 “This is the time to take advantage of so many things. What is happening with COVID has moved us up five years in technology,” John said. “You no longer have to relocate. Instead of having to travel for two months to go raise capital, they are raising capital on Zoom in two weeks. In times like this, people say I am going to work on my own dream now. The talent is there right now to tap in to.”

The Simpkins Speaker Series was created through an endowment from Bernie Simpkins, a well-known Space Coast entrepreneur who passed away on Oct. 26 at age 92. Simpkins' legacy also includes a scholarship program through the EFSC Foundation.

E’ala Burgess is starting a pet and house-sitting company that will service the Space Coast. 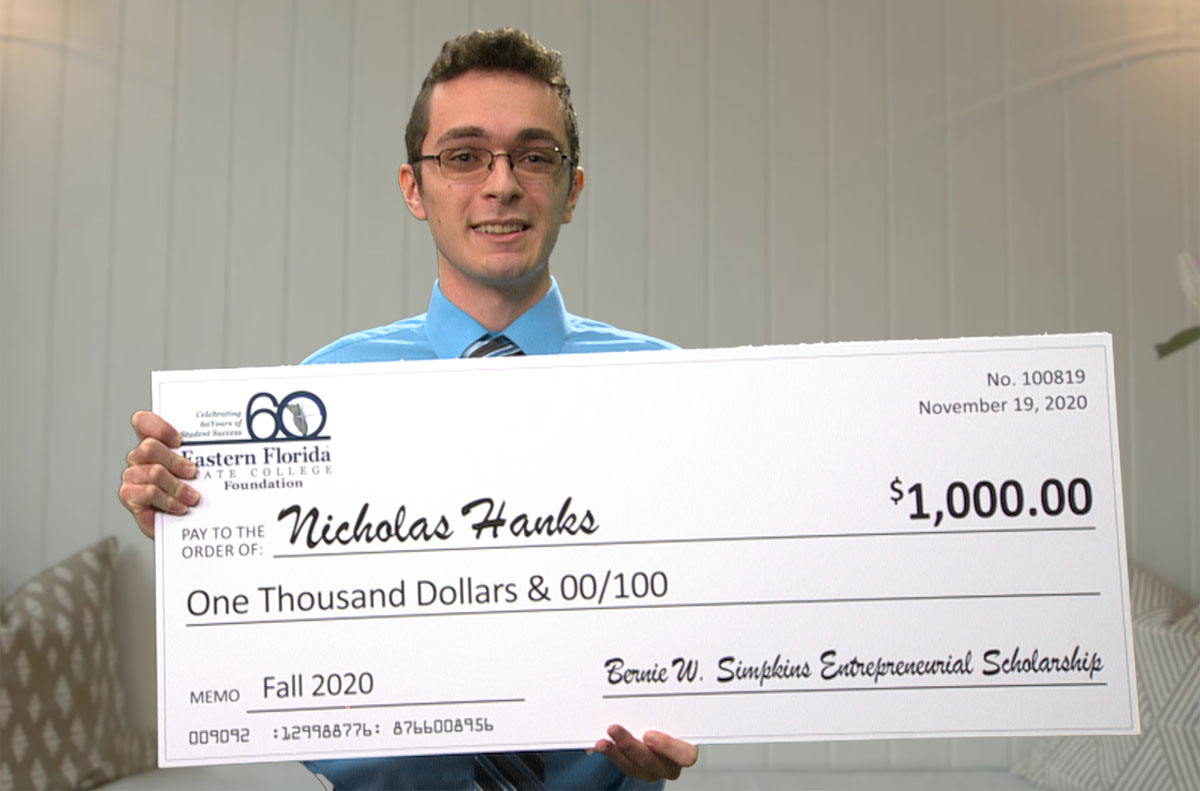 Nicholas Hanks is starting his own online music marketplace called Upscale to help musicians who are creating marketable songs.

“This scholarship is going to help me gain the expertise I need to run Upscale and I am super excited to see where it all goes and how it grows in the future,” Hanks said.