Lockheed Martin and ASRC Federal are building NASA’s next-generation Orion spacecraft that will take astronauts back to moon and on journeys to Mars.

Since the EFSC program began, Lockheed Martin and ASRC Federal have hired 30 participants studying in the Aerospace Technology Associate in Science degree program. The companies call the program critical to building their future workforce.

“I think it’s important that our education system recognizes there is more than one way to get advanced knowledge and skills beyond the traditional four-year brick and ivy university,” DeSantis said.

“Some of these concrete skills are in as much demand as ever. We want to make (sure) that our system is nimble enough to recognize that and produce graduates that have a capacity to earn a good living when they get out of school.” 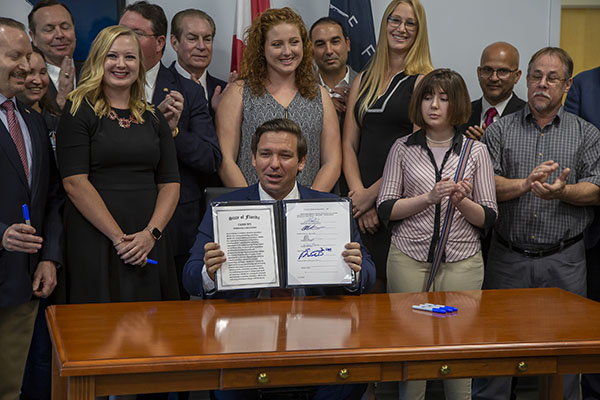 DeSantis praised the EFSC program, Lockheed Martin and ASRC Federal, saying such efforts are providing highly skilled workers to space companies and giving him a way to help attract more rocket and spacecraft makers to the state.

Commercial space companies such as SpaceX and Blue Origin have set up shop at KSC with more lining up to follow.

"I think these types of programs will help the folks that go through them, but I also think it will help me sell Florida for additional investment into the future," he said.

"What we are building here is not only an apprenticeship program like we have with Lockheed (but) companies apart from Lockheed Martin come and say, ‘Hey, there are a bunch of folks here on the Space Coast who could fit our need."

Richey thanked Lockheed Martin and ASRC Federal for the close partnership, saying the college is “passionate about helping to create Florida’s highly skilled workforce for today’s jobs and for the future.”

“I also want to give special thanks to our governor, our legislative leaders and our commissioner of education for giving us the tools, through this legislation, that will allow us to meet the governor’s challenge of having Florida lead the country in workforce education by the year 2030,” he said.

“It is amazing to think that I can be playing a role in the human exploration of deep space,” she said. “It’s an incredible opportunity that I would never have thought possible.”

The legislation, which passed unanimously in the House and Senate, creates a new pathway starting in high school for technical and vocational training and would inject $10 million into apprenticeship programs.

DeSantis and lawmakers believe it will help meet the rising demand for workers in fields such as advanced manufacturing that many high-tech Florida companies need.