June 20, 2019 - Jaylynn French admits she could barely hit the ball the first year she came to the P.J. Wilson and Henry Scott Minority Youth Golf Camp, which started in 1992 with assistance from its namesakes, Wilson and Scott, two African American golf professionals in Brevard County. 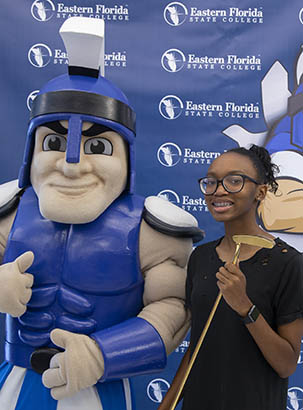 On Thursday, French was named the recipient of a two-year academic scholarship to Eastern Florida State College. She has come a long way in the seven years she has been participating in the camp.

"My mom has always pushed me to play golf, and this means I have accomplished more than I could ever have imagined," said French, who is a rising junior at Rockledge High School and plans to go into OB/GYN nursing after she graduates.

"When I started here I was not very good at all, and now I am thinking about joining the high school team. I have to give credit to coach [Roosevelt] Jackson, who has been pushing me for years."

"Jaylynn is consistent. She shows up early to camp every day to help set up and is here every Saturday as well. I am more than happy for her to receive this scholarship."

About 100 young golfers were recognized on Thursday for completing the camp, which for years was best known as the Minority Golf Camp because of its efforts to reach out to minorities, but has always been open to all young people. Participants received certificates and Eastern Florida State College backpacks during an awards ceremony on the Cocoa Campus. 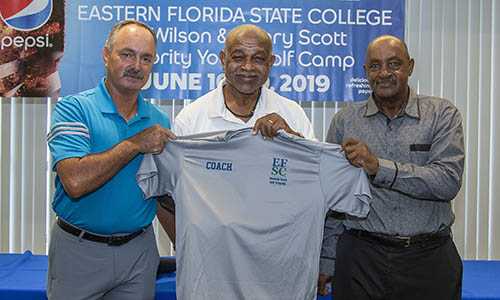 In the beginner group, Arianah Parrish was named Most Improved, Christinia Lynch received the Sportsmanship Award and Best Attitude went to Austin Smith.

In the intermediate group, Kayla Bissland was the Most Improved, the Sportsmanship Award went to Enzo Boffo and Best Attitude went to Cerayah Colclough.

In the experienced group, Dylan Benson was the Most Improved, the Sportsmanship Award went to Brianna Kertz and Best Attitude went to Emma Carver.

"Without consistency and commitment, you would not have been chosen for the job you do. At the end of the day, if you want to be successful in whatever you are doing, you have to be consistent and committed."

Moss, who entertained the audience with a story about improving his video game skills to be able to compete with his wife, added:

"For you to go from good to great, you don’t have to do a whole lot; you just have to tweak a couple little things. And if you are already great, [going from] great to extraordinary just takes a couple of tweaks, and [going] from extraordinary to phenomenal just takes a tweak or two. If you can tweak your consistency and commitment, you will be out of this world!"