Learn more about the resources in the EFSC Student Union, including Food Court hours.

February 4, 2019 - An exciting new chapter in student life began Monday at Eastern Florida State College with the dedication of a new Student Union on the Melbourne campus. 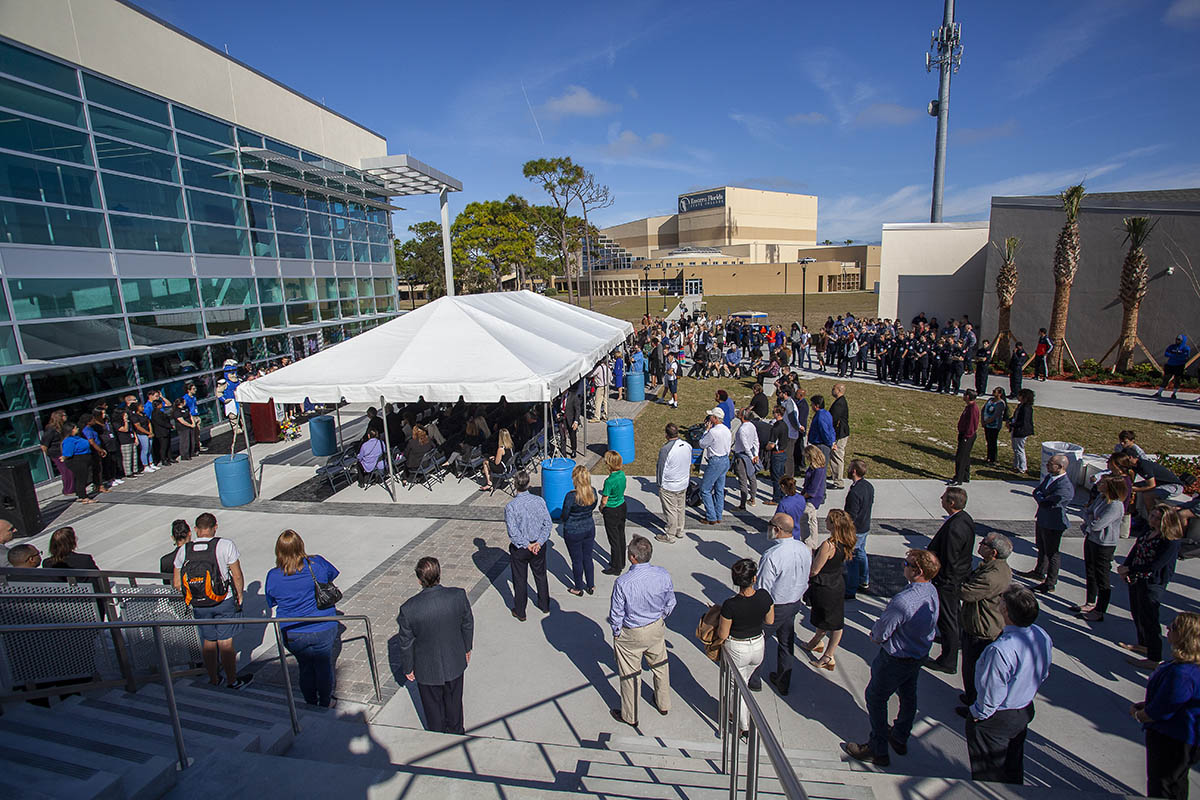 College officials, community leaders and students gathered for the event that marked another major step in the college’s continued growth.

“In fact, many of our students provided their input for the design,” said Richey. “You can see many of their ideas in this very special building that contains sleek glass walls, inviting open spaces inside and out, and all the areas for our students to plug into their digital lifestyle.”

The Student Union includes a food court with five vendors, study and lounge areas, offices for student government, and a large multi-purpose room for student, college and community events.

"It has been a wonderful experience to transition from something small to something so nice and big," said EFSC student and Melbourne Campus Student Government Association President Jean Szurka. 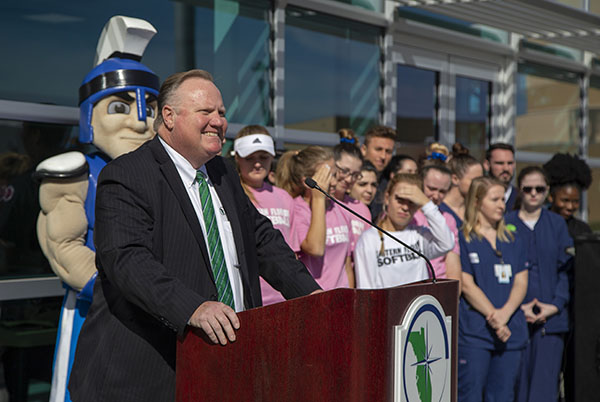 EFSC Presdent Dr. Jim Richey speaks at the Student Union dedication as students and the college mascot look on.

Richey described the building as “an impressive structure in shape, form and function, and will serve students and our college community in valuable ways for many, many years to come."

He also said the building symbolizes something important:

“The distinctive growth, fundamental changes, welcoming attitude and student first-approach that Eastern Florida State College stands for as we continue meeting and hopefully exceeding the needs and expectations of our students and community.”

Richey cited several examples, including about 60 new academic programs in recent years that have transformed the college, with nearly 20 Bachelor Degree tracks among them. 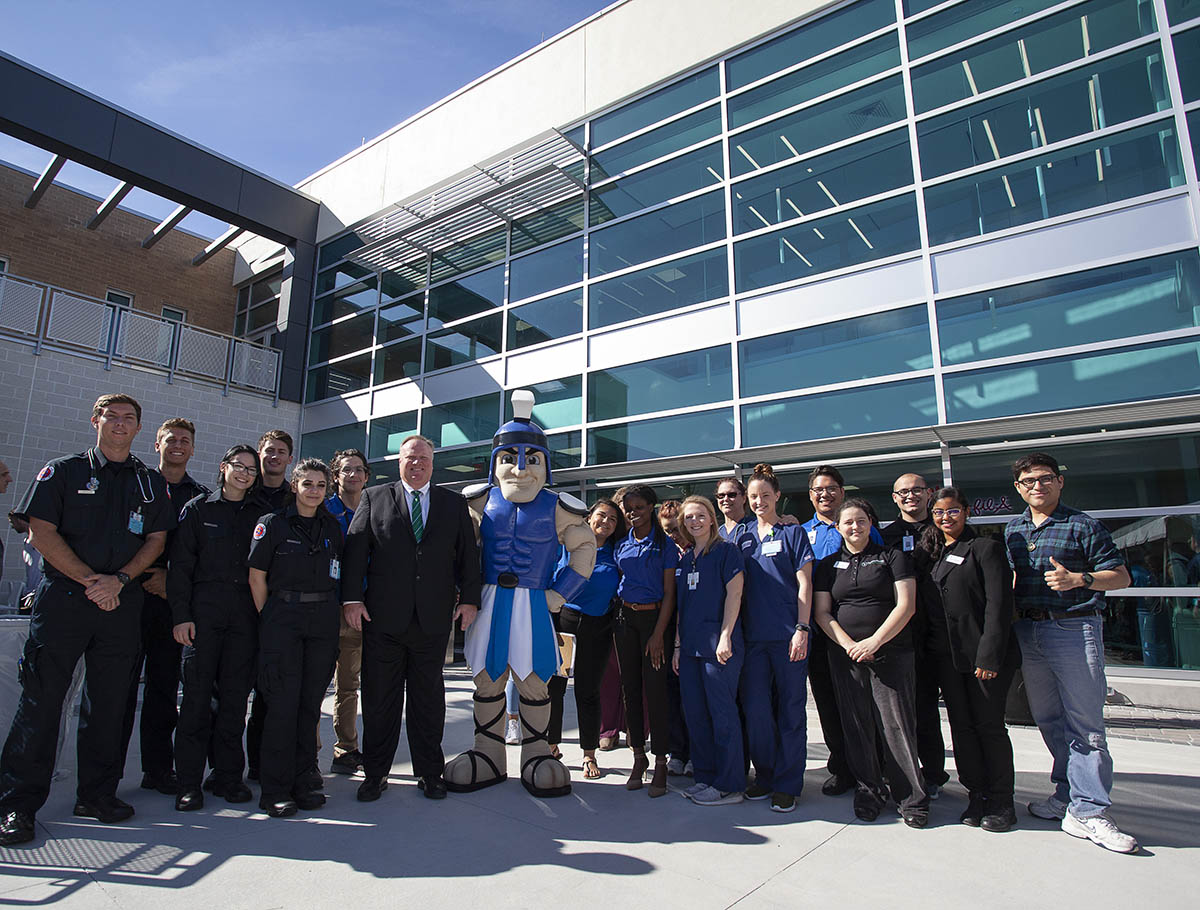 “Those programs represent the most rapid expansion of academic degrees in the college’s history, with still more on the way,” he said.

The college has also significantly increased the number of courses and degrees available completely online, providing more flexibility for students who are often juggling work and families.

“We have done all that and more while not raising tuition for seven straight years, reflecting our firm commitment to keeping a college education within financial reach,” said Richey.

Funding for the Student Union came from the Florida Legislature with former Speaker of the House Steve Crisafulli of Merritt Island playing a central role in its approval.

"Just to have a comfortable space to go to when you come out of class and have some time or some work to do, it definitely helps take the edge off," said Melbourne Campus student Tyrale Chavez. 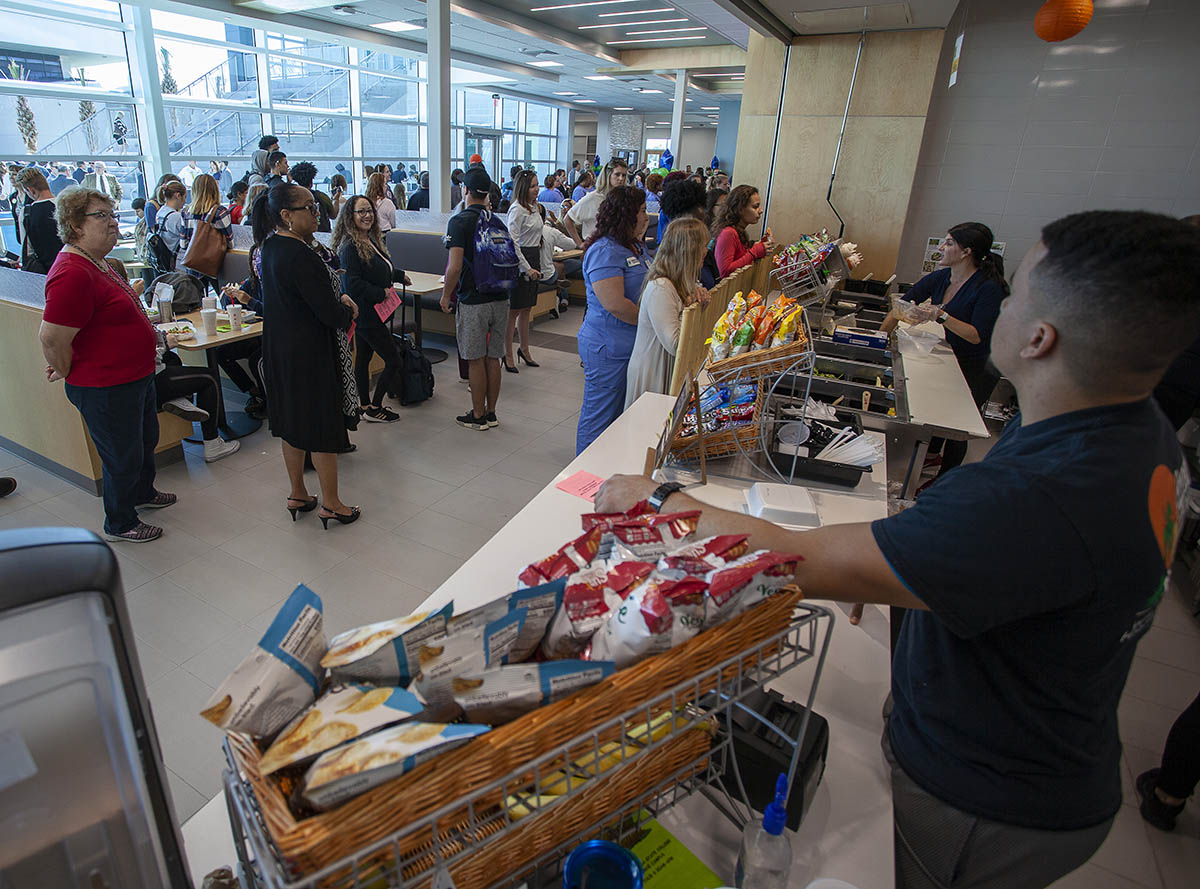 Those attending the Union dedication toured the building, including the new Food Court.

During the dedication, Richey also thanked the college’s Board of Trustees for “their unwavering support and selfless commitment to higher education at Eastern Florida. Without them, none of this would be possible.”

The Student Union is the third major new building on the Melbourne campus as part of its ongoing expansion.

In 2017, a new Health Sciences Institute opened with 10 highly specialized labs on par with the best such facilities in the country.

In 2015, a new Public Safety Institute opened that houses a Police Academy, EMT training and a number of criminal justice programs.

The college also plans to break ground later this year on its first Student Housing units.

Other EFSC campuses are also benefitting from new facilities:

For more information on EFSC and its programs, visit easternflorida.edu