December 10, 2018 - Students at Eastern Florida State College celebrated a major achievement in their lives Monday amid cheers from family and friends during Fall Commencement.

Nearly 1,800 students were eligible to graduate and walk across the stage at the King Center for the Performing Arts on the Melbourne Campus. 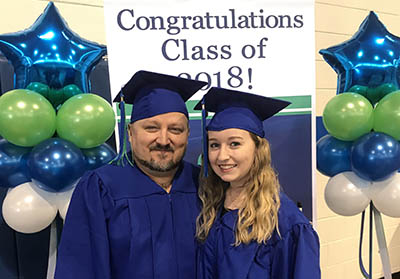 Carl Maggard and his daughter, Miranda Maggard,
both graduated Monday.

Among them were Carl Maggard and his daughter, Miranda Maggard. Carl received a College Technical Certificate and Miranda an Associate in Arts degree.

His daughter, who encouraged him to return to college after a 20-year absence, assisted Carl, who was declared legally blind in 2008, across the stage.

"It’s absolutely awesome," said Carl. "We would often run into each other on campus, and graduating together is really special."

Also among those graduating was Frederick Scarber, who earned his Bachelor of Applied Science in Computer Information Systems Technology. Scarber is currently stationed at Patrick Air Force Base and has plans to pursue his Master's degree.

"I am so excited," Scarber said. "I am active duty military. This degree gives me the chance to expand my knowledge in my career field." 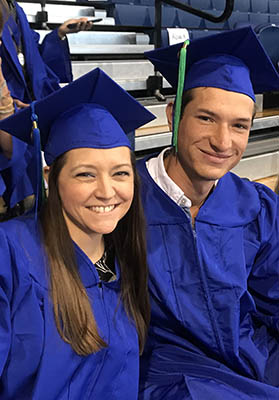 Also graduating this Fall Term, both with an Associate in Arts degree, were Christine Stevens and William Carpenter, who — as aunt and nephew — had additional cause to celebrate.

"If I had to say how I felt about today," said Carpenter, "I would say that graduating with my A.A. at the same time as my aunt — I realize the most important thing in my life is time.

"If you don't make an impact with the time you have, then what is the point of doing anything at all?"

"Although it has taken me a long time, I am a very proud first-generation college grad!" added Stevens. "I wanted to show my nine-year-old son that he can do anything."

Eastern Florida President Dr. Jim Richey lauded the graduates for their hard work and determination to improve their lives, saying:

"You all have stories to tell on how you got to this moment, stories about your determination that speak volumes about the strength of your character and the spirit in your heart.

"Among you are those who have worked one and even two jobs, tirelessly taking classes semester after semester to pursue your goals.

"There are mothers who have fed their children, helped them with their homework and put them to bed, and only then started their own homework late at night.

"There are students just out of high school filled with energy, and middle-aged students in the workforce coming back to learn entirely new skills or improving the ones they already have. 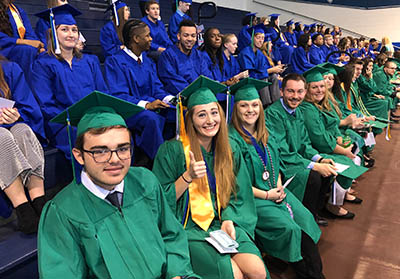 "There are veterans who have been to war and bring their heroic lessons of comradeship, fortitude and sacrifice to campus and the classroom.

"In each of you wearing a cap and gown, I see a profile in courage and proof the American Dream is alive, well and ready to meet the challenges of the future."

Both Commencement ceremonies were televised live on WEFS-TV and streamed online. Replays can be viewed on the College’s YouTube channel at bit.ly/efscwatch.

Graduates, family and friends are encouraged to post their photos and videos from the day on social media using the hashtag #EFSCgrad.

The students joined more than 100,000 others who have graduated from the College since it opened in 1960.

Eastern Florida offers more than 100 programs, including Bachelor's degrees, Associate degrees and College Certificates, with classes on its four campuses and online.