November 27, 2018 - UCF graduate Albert Manero started college with a dream to design airplanes and rockets and transformed that into a non-profit company that makes  bionic prosthetic limbs for children, an inspiring story he shared today as the latest speaker in EFSC's Simpkins Entrepreneur Series.

"My dream was to wind up on the Space Coast and build rockets and airplanes," Manero told the crowd during his presentation at the King Center for the Performing Arts on EFSC's Melbourne campus and livestreamed to the Cocoa campus. "I grew up in Tampa and on a clear day could even see the shuttle launches from there and that's what inspired me." 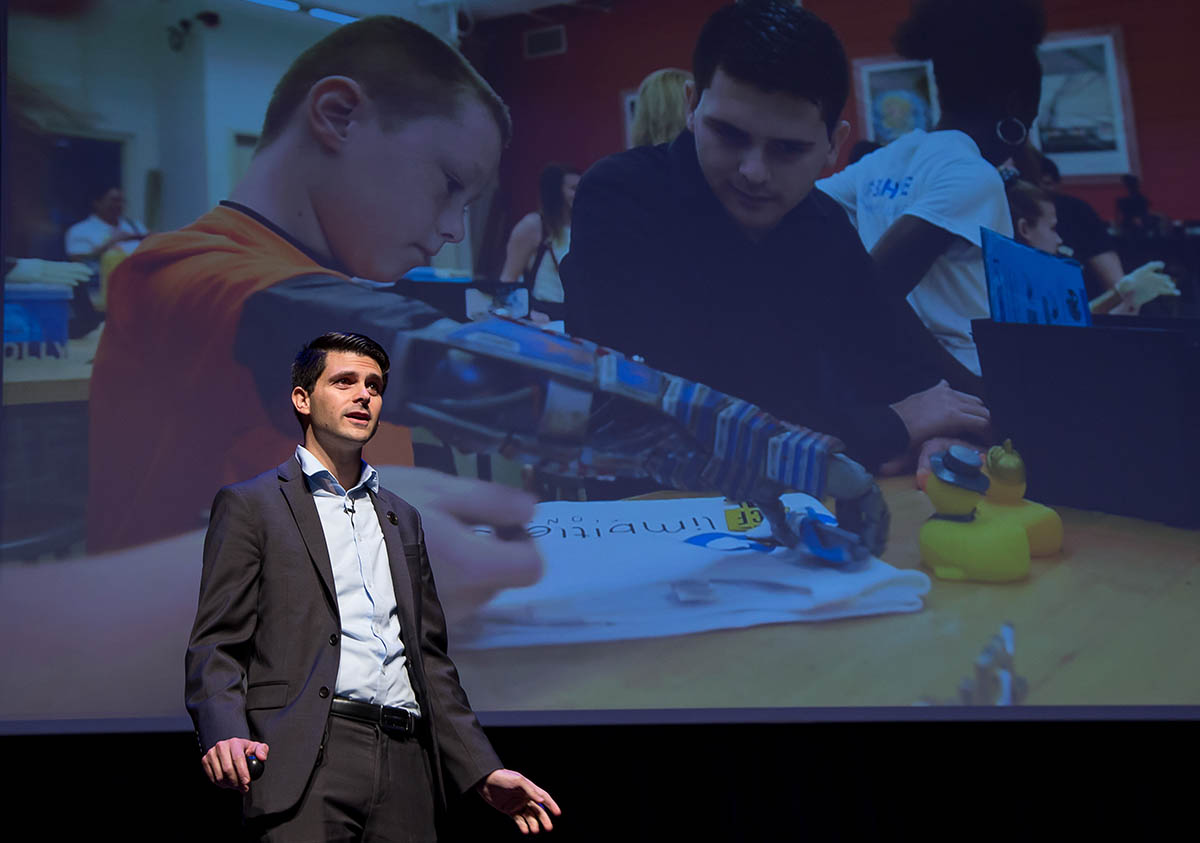 As an undergraduate UCF aerospace engineering student, Manero was running late to class and heard a radio interview with a man who invented the first 3-D printed hand.

Inspired by that, he wound up in UCF's aerospace research lab, learned how to create low-cost prosthetic limbs for children and started reaching out to friends to help form what started as a student club and evolved into the non-profit company Limbitless Solutions still based at UCF. The company gives alway prosthetic limbs to children and families in need.

"I was contacted by an Orlando family about their son who was born missing part of his arm," said Manero. "Because children grow so quickly, I learned they need a new prosthetic arm about as often as a new pair of shoes, making it very costly."

With 3-D printing technology, Manero's team of engineering student volunteers could get the $40,000 cost of a traditional limb down to about $350 for their bionic models. They quickly discovered that children wanted the arms painted bright colors, with designs that fit their personalities and interests.

That led Manero to reach out across the UCF campus and involve art students, plus the game design program, whose students create innovative video games to train children how to use the arms.

"You need a lot of people way outside of your expertise," said Manero, who went on to earn a master's and doctorate degree from UCF. "You need people who are better than you, smarter than you." 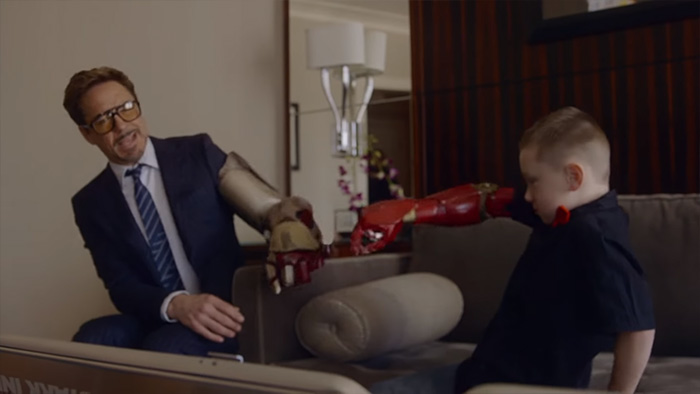 In one very special case, the actor Robert Downey Jr. was enlisted through Microsoft OneNote and The Collective Project to present a Limbitless-designed prosthetic to a congenitally deformed youth named Alex, who dreamed of having a bionic arm like the one worn by Downey in the Iron Man movies.

The video of Downey presenting the arm went viral on social media and Manero told the crowd that a connection via the popular professional networking tool LinkedIn made it possible.

"It started with a LinkedIn message from someone at Microsoft reaching out to me about an interview," he said. "Turns out it was the start of The Collective Project. So be able to tell a good story, make sure you have a LinkedIn account and answer your messages."

The Simpkins Entrepreneur Series is co-sponsored by EFSC and Florida Today and is named after Bernard Simpkins, a highly successful entrepreneur and Space Coast business leader who established the sessions that have brought some of the nation’s top business leaders to Brevard. 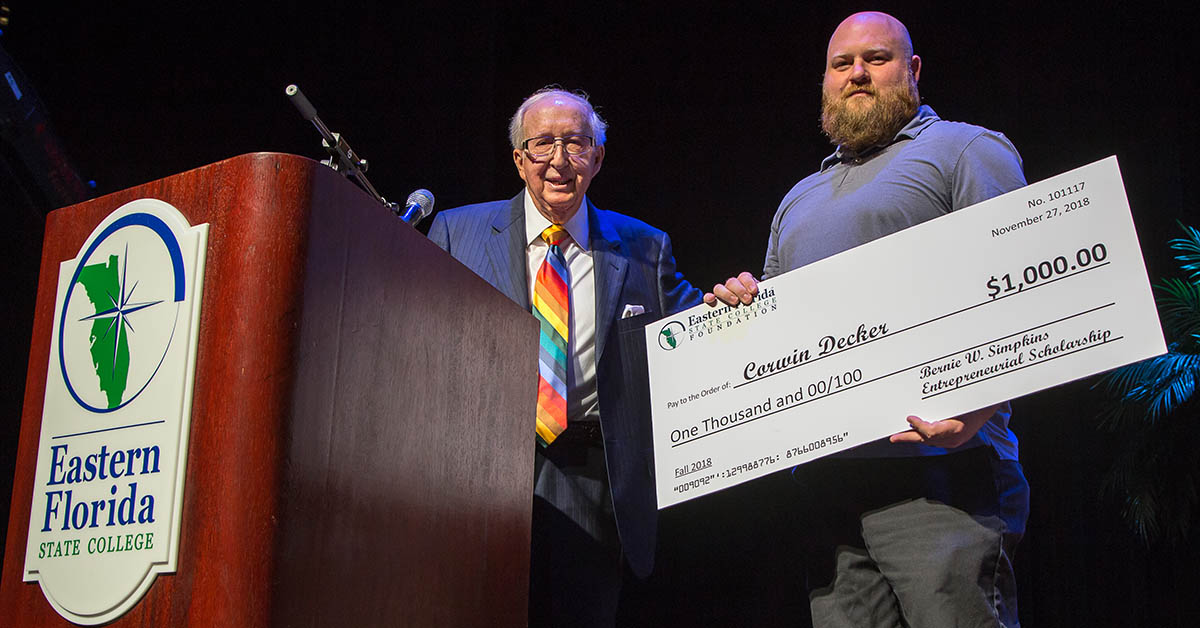 The event also includes the presentation of the $1,000 Simpkins Entrepreneurial Scholarship.

The Fall term recipient was Corwin Decker, who was medically discharged from the U.S. Army and is now pursuing a Digital Media degree at EFSC.

"I want my children to see that no matter what hardships they face in life, their education is something no one can take away from them," Decker wrote in his scholarship essay. "I am in the process of starting a business called Iron Fire Designs, a unique blend of photography services, stock photos, and prints. Creating this business is going to require dedication, business skills, and technical skills in my field. Quitting for me is not an option, and my goals are set high."

That same entrepreneurial spirit has Albert Manero expanding his company's mission with a new effort called Project Xavier, which aims to use facial muscular controls to operate wheelchairs for those who've lost the ability to use manual controls.

Microsoft co-founder Bill Gates and his wife Melissa have even visited the UCF lab to see that effort in action, with Gates sharing the experience on his personal blog and next week Manero is meeting with a social inclusion expert at the United Nations, a connection he made by sending the person a LinkedIn message.

"I just wanted to design airplanes,  but I'm glad I got distracted because this has changed my life and given us a platform to help others."