October 15, 2018 - A new Student Union that will be a vibrant center for student life on Eastern Florida State College’s Melbourne Campus is nearing completion with doors set to open in January. 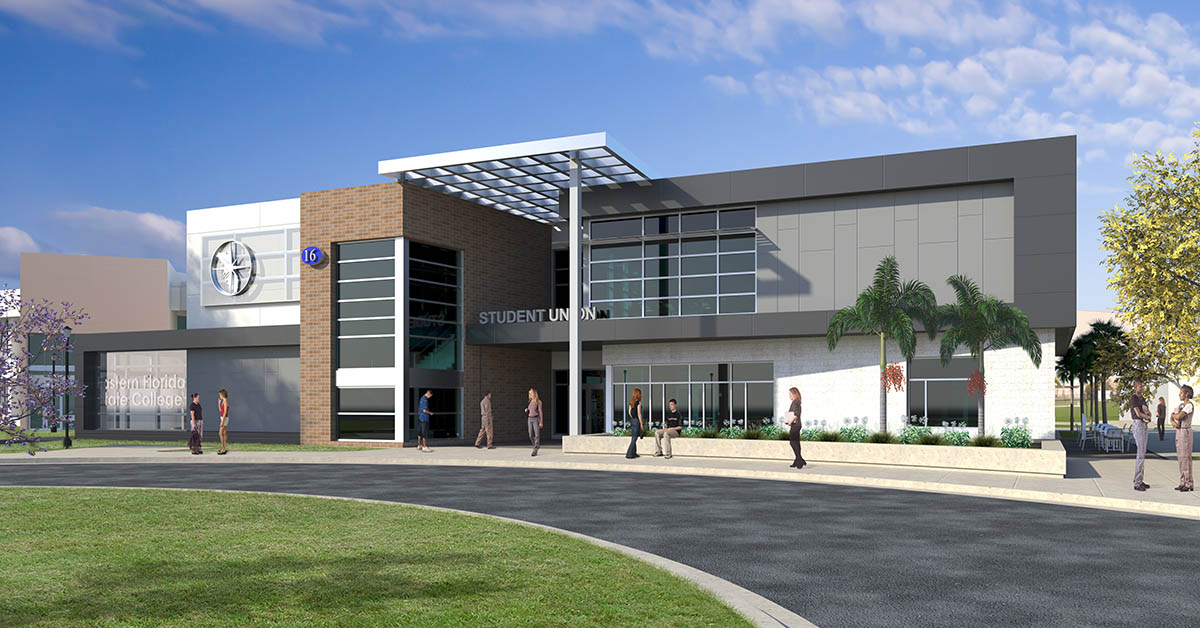 The college's Board of Trustees heard an update on the project Monday, with college President Dr. Jim Richey calling it the next important step in the campus’ continuing expansion.

“The building’s unique design and services it will provide reflect the exciting things happening at Eastern Florida and the great opportunities that students are seizing to start their careers,” he said.

Construction on the 32,000-square-foot building began in October 2017 and is on schedule and on budget to be finished in December. It will be ready for use when students start the Spring Term in January.

Stockton Whitten, the college’s Associate Vice President for Facilities and Special Projects, outlined the project’s progress and features. They include:

• The two-story glass structure will serve as the front door to the campus and include space for a variety of student services, clubs, activities and government.

• There will be a multi-purpose room to hold large student, college and community events, and a rooftop terrace.

• Landscaped plazas around the building will connect the Student Union with the Titan Field House and Science Building next door. 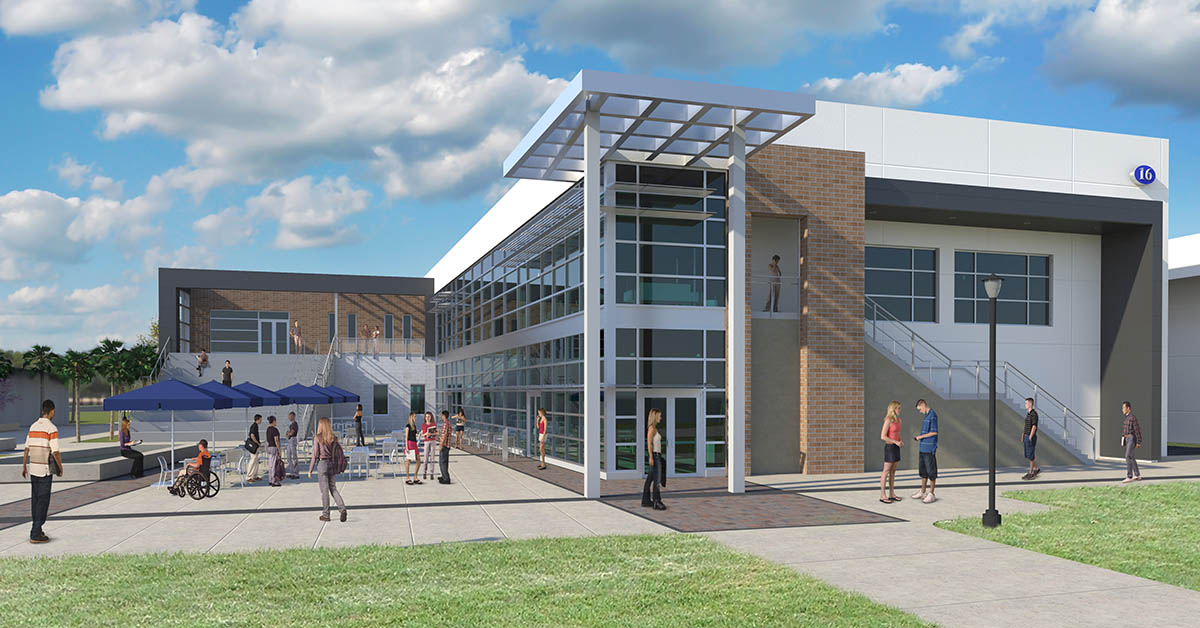 The project contains other elements that are already completed or nearing the finish line:

• Rerouting Titan Boulevard and turning a converted section of the main thoroughfare into a grassy promenade with trees, benches and landscaped pathways.

• Repairing and repainting the exterior of three nearby buildings and adding new outdoor lighting at the Dr. Joe Lee Smith Teaching Center, Titan Field House and the Science Building.

• Installing a major new cooling system to cool and heat the entire campus.

All the work is part of the Melbourne campus expansion that began in 2014 and that has already resulted in the construction of two major new academic buildings.

In 2015, a new Public Safety Institute opened that is home to a Law Enforcement Academy, Corrections Academy, EMS and 911 Operator training along with studies in other criminal justice fields.

In 2017, a new Health Sciences Institute opened that houses 12 programs and contains specialized labs with the latest medical technology on par with the best such facilities in the nation.

Future plans call for the construction of Student Housing and a Center for Innovative Technology Education that would tailor training for the aerospace and high-tech industries.

In other matters, trustees learned the King Center for the Performing Arts on the Melbourne Campus has completed the most successful season in its 31-year history.

More than 125,000 patrons attended performances that pulled in about $3.8 million in ticket sales. The King Center’s endowment also rose to $7.8 million, an 8.5 percent increase.

“It was our best season ever thanks to the hard work of our great staff, who often labor around-the-clock to stage performances,” said Steve Janicki, the King Center’s executive director. 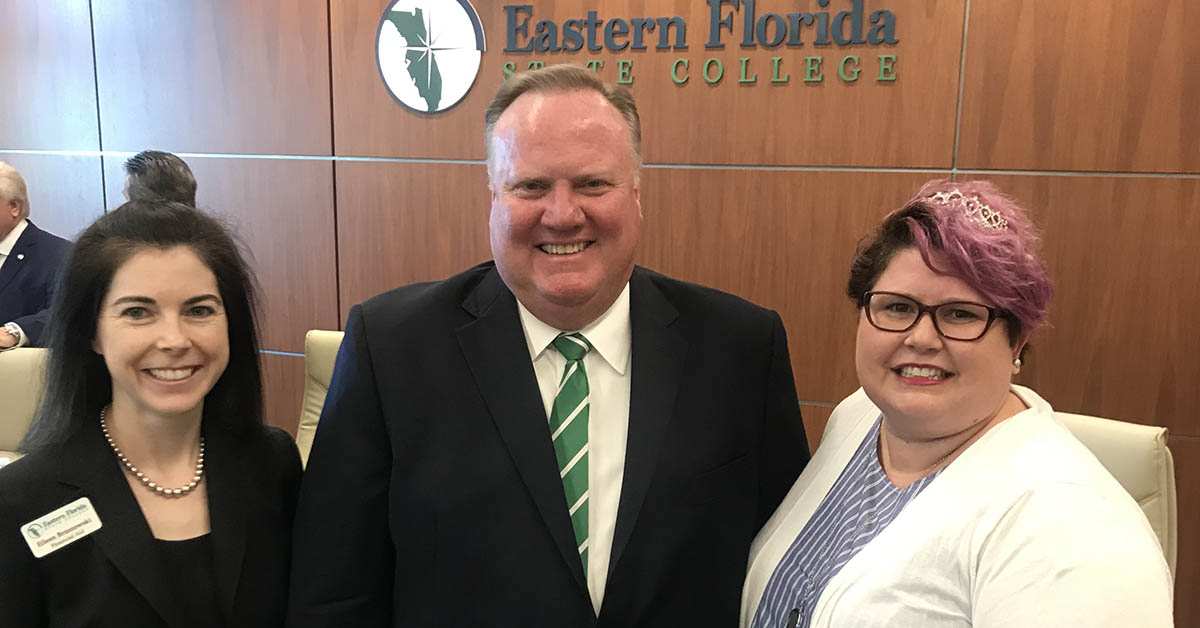 Said Board of Trustee Chair Alan Landman: “It’s an amazing job and the buzz around town about what’s going on there is incredible. The King Center is an important and vital cog in our community.”

Carrie Wells, an English instructor on the Palm Bay Campus, was cited for her exemplary work with students, including efforts that led to the creation of a Writing Center to help them with term papers and other assignments.

Eileen Brzozowski, Director of Financial Aid, was recognized for her work in helping 7,000 students receive financial aid during the past year in a critical role that continues making an EFSC education highly affordable.