February 21, 2018 - Military veterans at Eastern Florida State College now have more scholarship opportunities thanks to a donation from the Rotary Club of Indialantic. 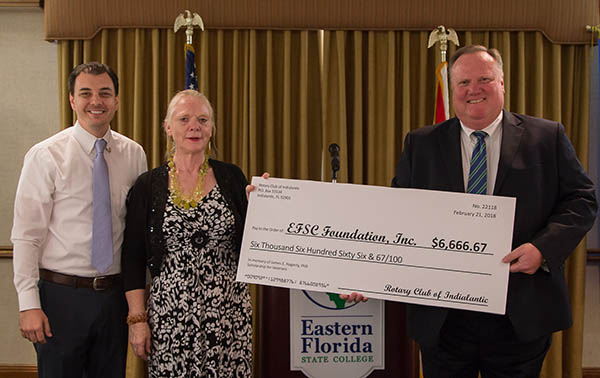 The club presented a check Wednesday for just over $6,666 to college President Dr. Jim Richey to establish the Dr. James E. Hagerty Memorial Fund for veterans, named in honor of the late Rotarian.

Richey thanked the Rotarians for their generosity, saying, “It will help the brave men and women who have served our country achieve their educational and career goals.”

The college currently has about 1,100 veterans enrolled. It also has a Military and Veterans Service Center dedicated to helping them in the classroom and with receiving their educational benefits from the Department of Veterans Affairs.

The scholarship money came through ticket sales from the recent Rotary-sponsored appearance of former Director of National Intelligence James Clapper at the King Center for the Performing Arts on the Melbourne Campus.

Before the presentation, Richey updated club members on the college’s continued growth and progress.

“Everywhere you look, we have new initiatives underway that are making the college a vital center for higher education and workforce development along the Space Coast and East-Central Florida,” he said.

The accomplishments Richey cited include:

The EFSC Foundation awards about 550 scholarships annually, but the demand for financial assistance keeps rising.

To learn more about the Foundation or to donate, visit easternflorida.edu/foundation