December 14, 2017 - Students embarked on new journeys in their lives Thursday as they celebrated their graduation from Eastern Florida State College during Fall Commencement. 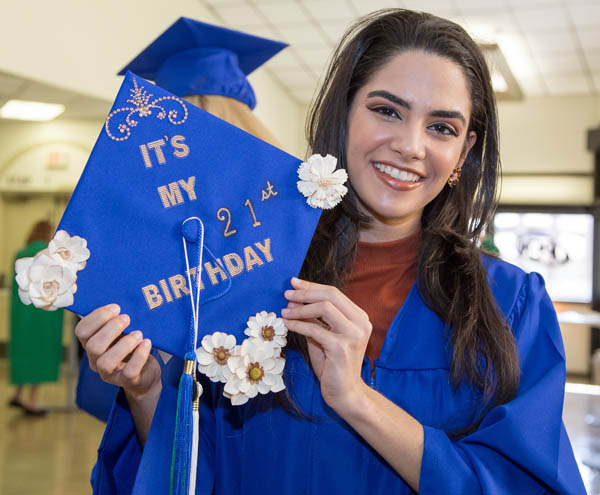 Among those graduating was Joreimy Maldonado-Rolon, who coincidentally celebrated her 21st birthday on the same day she commemorated earning her Associate in Arts degree as an honors graduate.

"It’s been great, I loved the professors and I have learned so much that I will be taking to UCF," she said. "This experience has taught me so much."

"I did not think it would happen so quickly. I applied through the College's online career system and got a message saying it matched and the employer called me within five minutes. I was really surprised," said Truong.

"I did a mix of online and on campus courses and I liked that there were options for me to do both. The teachers were very responsive."

College President Dr. Jim Richey lauded all the graduates, citing their commitment to complete their studies despite facing challenges in their lives.

“Some of you have worked demanding jobs that drained your time and energy and made completing your studies more difficult.

“Others have had the responsibility of caring for children and all the worries that go part and parcel with raising a family.

“Still others have sought a new career and finding a different path forward, even at middle age.

“Others have served bravely on the battlefield and are now searching for a new day and a fresh start here at the college.

“Whether you are receiving a Bachelor’s Degree, Associate’s Degree or College Certificate, my admiration for you is immense and I congratulate you today on this important milestone. "

About 1,350 students were eligible to graduate during two commencement celebrations held at the King Center for the Performing Arts on the Melbourne campus.

Both ceremonies were televised live on WEFS-TV and streamed live online. Replays can be viewed on the college’s YouTube channel at bit.ly/efscwatch

Graduates, family and friends are encouraged to post via social media using the hashtag #efscgrad, with custom Snapchat photo filters available at EFSC commencement in and around the King Center.

The graduates joined more than 100,000 others who have earned their degrees from the college since it began in 1960.

Among those congratulating the newest graduates was Florida Gov. Rick Scott who shared a public letter to all EFSC graduates.

In the past five years, the college has launched 40 new programs in Business, Health Care and Computer Technologies that give students excellent job opportunities in fast-growing fields after graduation.

The programs include 17 highly-popular Bachelor’s Degree tracks, with 1,900 upper-level students enrolled in the Fall Term that just ended.

New graduate Alexandrea Lynn Cain, who also serves in the Navy Reserves, plans to move on to one of those EFSC bachelor's tracks and brought her daughter to celebrate the associate degree milestone.

"It's evidence to my daughter that it can be done. The next step is just getting my bachelor’s degree," said Cain. "The school really allowed me to juggle my schedule between work, school and my daughter. It has worked out great." 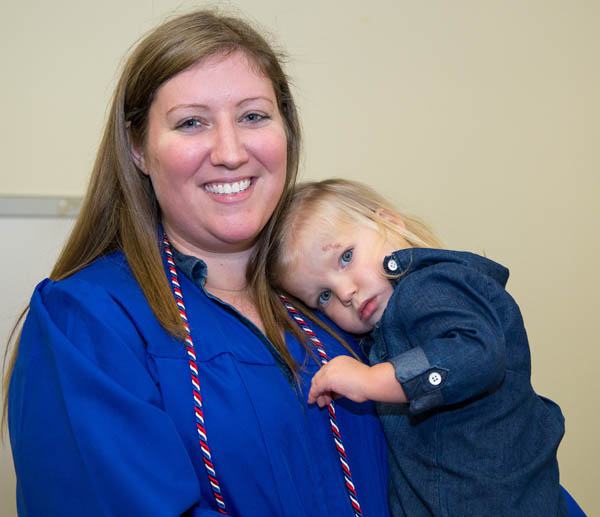 Alexandrea Lynn Cain holds her daughter before lining up to graduate from EFSC with an associate's degree. Her plan is to continue at EFSC in a bachelor's program.

A major expansion of EFSC's Melbourne campus is now underway to support the new programs and provide a rich learning environment for students and faculty in state-of-the-art facilities.

The first new building opened its doors in January 2015 with a Public Safety Institute that trains professionals in law enforcement, corrections and other criminal justice and first responder fields.

A new Health Sciences Institute came next in January 2017 with labs and training areas on par with the best in the nation to educate students in a dozen programs that include nursing.

Next up is a new Student Union with construction underway and completion set for fall 2018. A two-building Student Housing complex is also scheduled to open in early 2020.

Other plans call for a new Center for Innovative Technology Education planned that would tailor programs to provide skilled employees for high-tech companies and firms launching the next generation of human spaceflight from Kennedy Space Center.

The college offers more than 100 degrees and certificate programs including Bachelor Degree tracks along with a wide range of Associate Degrees.