No Tuition Hike at EFSC for Sixth Straight Year

The provision is a main feature in Eastern Florida’s new 2017-18 fiscal year budget, which the college’s Board of Trustees unanimously approved at a Monday meeting.

Key elements of the budget include:

• No tuition increase for the sixth straight year, a period that corresponds with the time that Dr. Jim Richey has been Eastern Florida’s president.

“Not raising tuition makes it more likely students will be able to afford to take the courses they need to graduate and begin their careers. This fact is paramount in my mind,” said Richey.

The total for tuition and general fees will remain $104 per credit hour for lower division courses for Florida residents, which is in line with other state colleges in Central Florida.

The per credit hour charge for upper division courses for Florida residents will remain $128.51, which is similar to other institutions in the 28-member Florida College System to which Eastern Florida belongs.

• A 2.5 percent base pay increase for members of the United Faculty of Florida Brevard Chapter in the third year of a three-year collective bargaining agreement.

The pact calls for a 2.5 percent pay increase annually over three years for a total 7.5 percent increase from 2015-18.

• The College expects to incur a significant mid-year cost increase for health and dental insurance, and will continue to provide those benefits to its full-time employees at no added contribution from them.

• Invest $18 million in projects, including the start of construction of a new Student Union on the Melbourne campus, and improvements to classrooms, technology, security and parking.

The budget was crafted after a $2.5 million funding cut from the Florida Legislature, part of a legislative-ordered $30 million spending cut for the Florida College System. 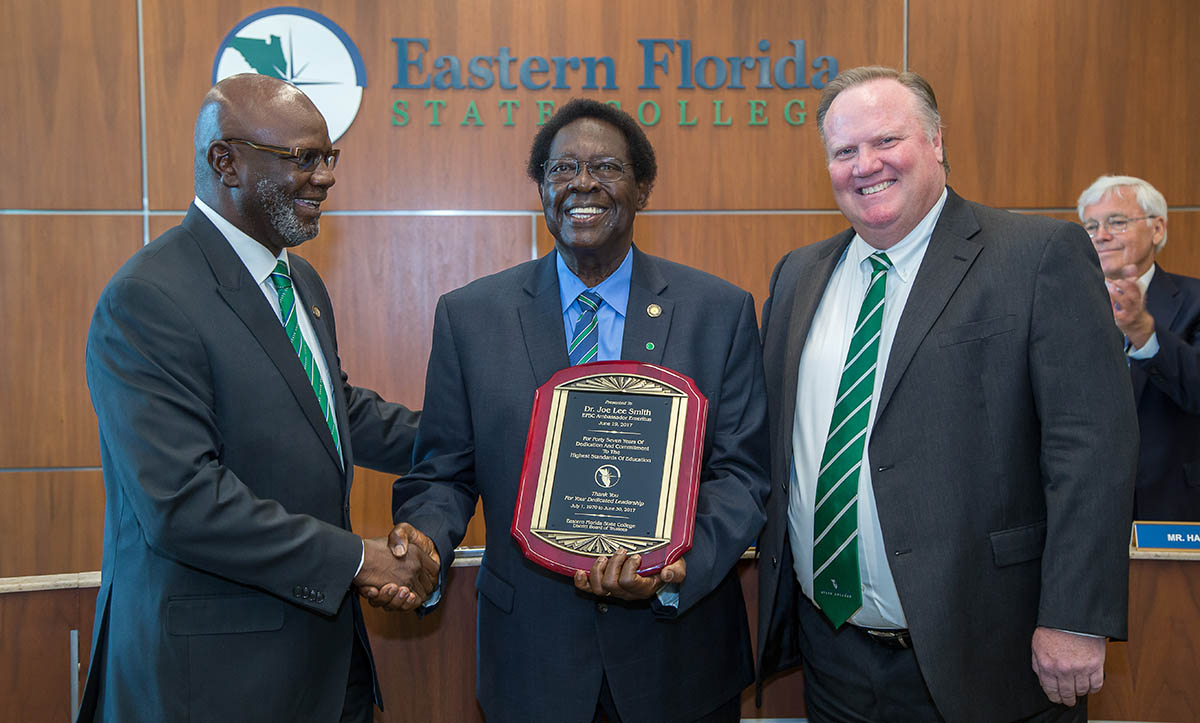 Dr. Joe Lee Smith, in the center, is honored by EFSC Trustees chair Moses Harvin Sr., on the left, and college president Dr. Jim Richey for Smith's 47 years of service to the college.

The college addressed its share of the reduction by eliminating vacant positions and cutting spending in 15 categories, including executive management salaries, travel, office materials and construction supplies.

In other matters, Richey and the trustees honored Dr. Joe Lee Smith who is retiring June 30 after nearly a half-century of service to the college.

Richey called Smith an African-American pioneer in education in Florida, rising to leadership positions at the college and opening doors through which many other minorities have followed.

“There is no part of our college that has not been touched and made better by Joe Lee, who has left an imprint far beyond the building located on the Melbourne campus that bears his name: The Dr. Joe Lee Smith Teaching Center,” said Richey.

“That imprint is an unmatched dedication to students, something he has shown every day at the college and across Brevard County in his tireless work urging youths to stay in school, study hard, graduate and earn a collegiate degree.”

Smith joined the college in 1970 and served as Provost of the Titusville, Melbourne and Palm Bay campuses, Dean of Instruction, Dean of Student Services, Director of Placement, Minority Affairs Advisor, College Ambassador and Executive Advisor to the President.