May 11, 2017 - Students tossed hats in the air and beamed for the cameras Thursday as they received their diplomas from Eastern Florida State College during Spring Commencement.

Two ceremonies were held May 11 at the King Center for the Performing Arts on the Melbourne campus with more than 2,000 students eligible to graduate. 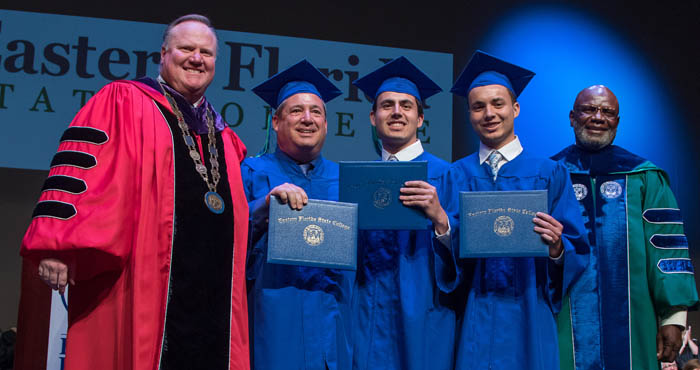 EFSC President Dr. Jim Richey, on the left, and EFSC Board of Trustees Chairman Moses L. Harvin Sr., on stage with Thomas, Chris and Nick Monteferrante: father and sons who graduated from Eastern Florida together.

Among the graduates were Thomas, Chris and Nick Monteferrante, a father and his two sons from Merritt Island whose coursework aligned so that all three graduated together.

"I've been working on my Computer Information Technology A.S. degree for nine years, with a lot of late nights getting assignments done, especially when our three kids were younger," said Thomas Monteferrante, who also works full time as a digital technician for AT&T. "I think my wife is the most excited about all three of us graduating at the same time."

Christopher and Nick will both be heading to the University of South Florida in June after receiving A.A. degrees, Nick's while dual enrolled at Edgewood High School.

"I wanted to take advantage of this opportunity, obviously it is going to save a lot of money but also I get this head start, already have my A.A. and that is really cool," said Nick.

"Toward the end, mom would tell dad if he took this class or that then he would be finishing right with Nick and me," said Chris. "When we look back we will say that this was a really cool thing we got to do."

The spring term graduates were praised by college President Dr. Jim Richey who told the crowd: "The familiar is always safe and comfortable, but the unfamiliar is where the action is.

"All of you graduating here today speaks to something very powerful that I'm sure you have learned about yourselves, and frankly, something that you should never forget: you can succeed at anything you choose to do, and you can draw upon that inner strength for direction and encouragement in the years ahead." 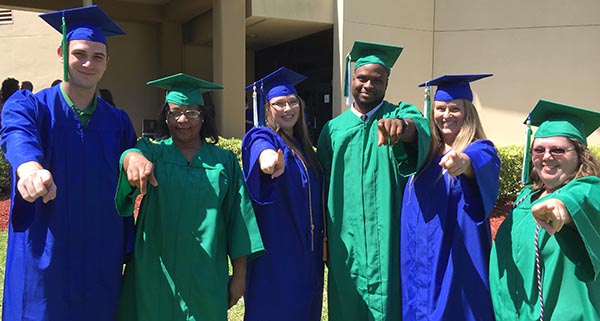 Graduates, family and friends are encouraged to post via social media using the hashtag #efscgrad, with custom Snapchat photo filters available for the first time at EFSC commencement in and around the King Center.

The spring graduates join more than 100,000 others who have earned their degrees from the college since it began in 1960.

Also among the spring graduates is the EFSC Aviation Maintenance Technology program's first graduate since the program launched last year. Gus Gorin was able to accelerate completion of the FAA-certified Airframe and Powerplant (A&P) program because of his prior training as a jet engine mechanic while on active duty with the U.S. Navy followed by five years in the reserves.

"There is so much about the civilian and military aviation fields that is different in terms of rules and paperwork and I wanted the FAA certification," said Gorin, who moved here with his wife from south Florida and who now plans to work at a local aviation company. "I came to an open house and met the EFSC instructor and could tell it would be a fun and flexible program, plus I qualified for financial aid and that was a huge help." 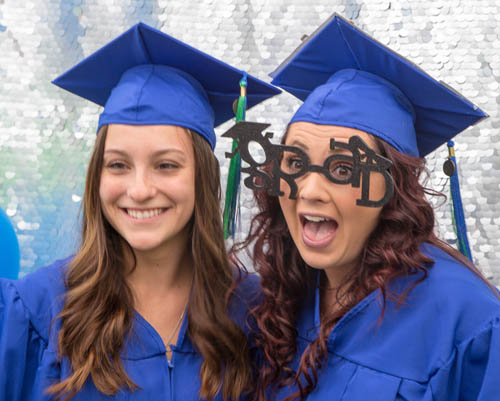 Aviation maintenance is one of 40 new programs launched in the past five years, including programs in Business, Health Care and Computer Technologies that give graduates excellent job opportunities in fast-growing fields.

A major expansion of EFSC's Melbourne campus is also underway to support the new programs and provide a rich learning environment for students and faculty in state-of-the-art facilities.

The first new building opened its doors in January 2015 with a Public Safety Institute that trains professionals in law enforcement, corrections and other criminal justice and first responder fields.

A new Health Sciences Institute came next in January 2017 with labs and training areas on par with the best in the nation to educate students in a dozen programs that include nursing.

Next up, a new Student Union with construction planned to start later this year and completion set for 2018.

A new Center for Innovative Technology Education is also planned at Melbourne that would tailor programs to provide skilled employees for high-tech companies and firms launching the next generation of human spaceflight from Kennedy Space Center.

The college offers more than 100 degrees and certificate programs including Bachelor Degree tracks along with a wide range of Associate Degrees.