March 29, 2017 - The accolades continued Wednesday for the Eastern Florida State College men’s basketball team as players and coaches were honored by the college administration after a season that will go down in the history books. 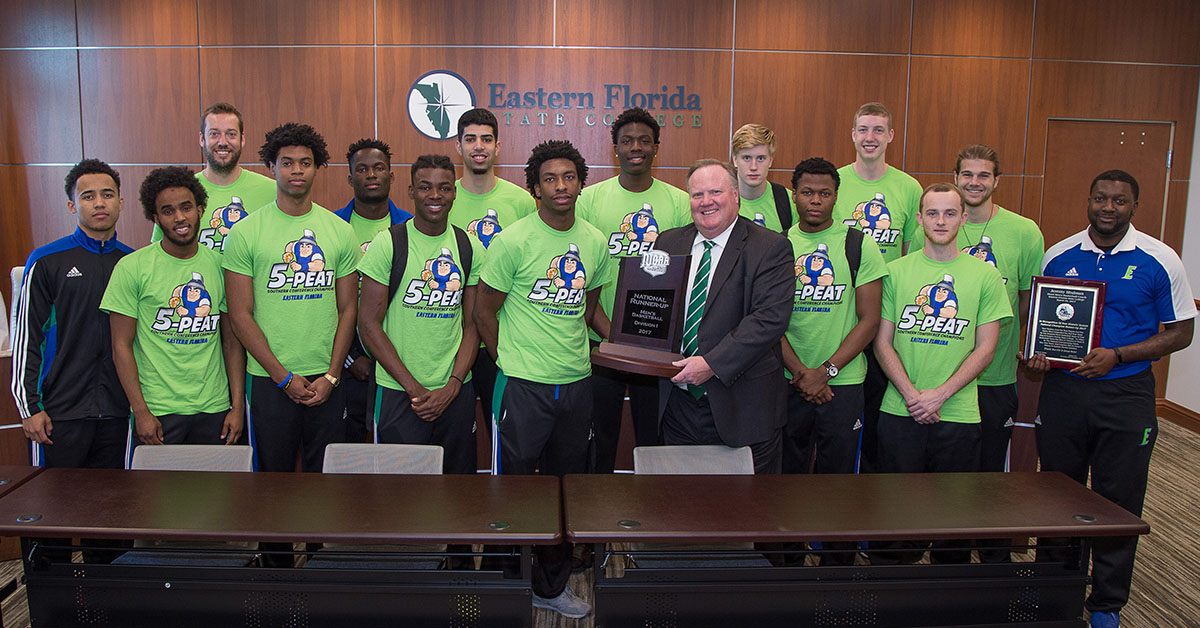 Players and coaches were recognized as the national NJCAA Division I Men's Basketball National Championship Runner-Up during a trophy presentation ceremony that included EFSC Board of Trustee members, President Dr. Jim Richey and other college administrators.

“Without Dr. Richey, Coach and Associate Vice President of Athletics Jeff Carr and the administration, we would not be where we are right now,” Eastern Florida State College men’s basketball head coach Jeremy Shulman said. “It is amazing how much this job and this program have grown in the seven years I have been here and that’s a testament to the unbelievable administration and support staff we have here at Eastern Florida State College. As a team we are very appreciative of that.”

The team set a school record for 31 wins in a season that included a run in the NJCAA Division I National Championship Tournament, before losing in the championship game in Hutchinson, KS last weekend to finish second in the nation.

Shulman talked about each one of the players in attendance at the EFSC ceremony and then presented the NJCAA National Runner-Up trophy to Dr. Richey, who then presented Shulman with a plaque honoring the historic season.

The plaque read: "Your passion, love for your players and the game have catapulted you and your team to the greatest men’s basketball team to ever play at Eastern Florida State College. No other basketball team has won 31 games or made it to the national championship game. You, your team and coaches will go down in history in Eastern Florida athletics. Thank you for a great ride!"

Richey congratulated the team for a remarkable season in which players won a fifth-straight Southern Conference title as well as a third-straight bid to the NJCAA National Championship Tournament, where they went all the way to the championship game for the first time. 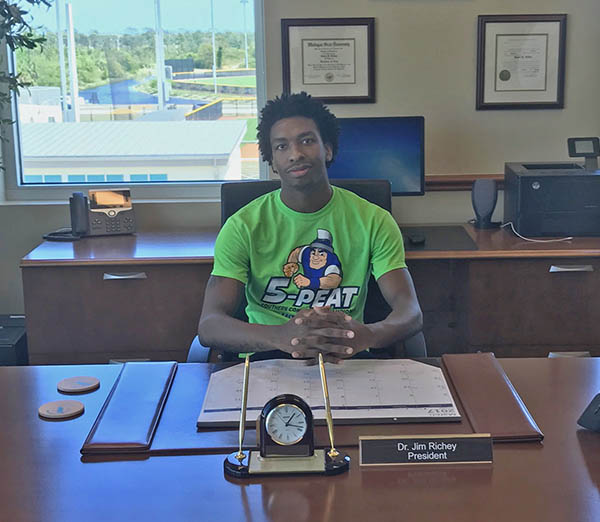 The Trophy Presentation Ceremony included a President's Office tour and opportunity for each player, including Kareem Brewton, to have a photo opp in Dr. Richey's chair. Brewton was an All-State player in 2017 and selected for the National Championship All-Tournament Team.

“You exemplify the proud tradition of student-athletes at Eastern Florida State College and I can’t wait to see what all of you will do in the future, both on the court and off,” Dr. Richey said.

“I am going to be monitoring how many bachelor's degrees, master’s degrees and PhD’s we get out of this group. I will be watching you guys!”

The team is also doing well in the classroom, posting a collective 3.31 GPA in the fall semester and all three sophomores, Austin Awad, Kareem Brewton and Joan Duran will be moving on to four-year schools.

“It’s just an affirmation of the hard work, the results we have been looking for across the board in this sport as well as other sports and we are so proud,” Dr. Richey said. “The college is about setting goals, achieving those goals and getting the results we are looking for and making the community proud and we certainly feel it internally here and hopefully our community does as well.”

After a team photo with Dr. Richey, the team shared a cake decorated with their team photo and got a tour of the president’s office.

“This is the kind of season you will always remember,” Dr. Richey told the team. “Congratulations on a great season.”