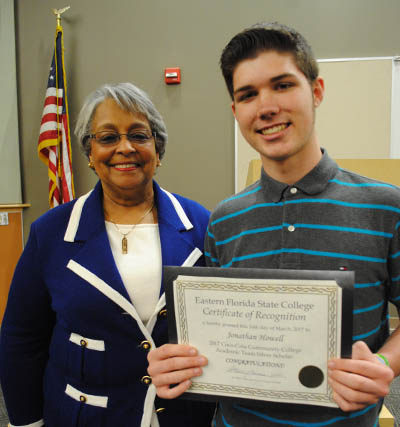 Jonathan Howell has been selected as a 2017 Coca-Cola Community College Academic Team Silver Scholar, which includes a $1,250 scholarship.

The team recognizes 50 high achieving two-year college students from across the nation who demonstrate academic excellence combined with leadership and service that extends their education beyond the classroom to benefit society.

Howell had earlier earned a place along with seven other Eastern Florida students on the All-Florida Academic Team that honors students for their achievements in the classroom and work in the community.

The All-Florida team consists of just 127 students from the more than 800,000 students in the Florida College System.

Meanwhile, three other students have been named 2017 Siemens Technical Scholars through the Aspen Institute and Siemens Foundation, a national program that includes scholarships ranging from $3,500 up to $10,000.

The students are Jon McMillen and Ryan Vondenhuevel in Aerospace Technology, and Reuben Johnson in Nursing.

The scholarships focus on colleges and students in the fields of Science, Technology, Engineering and Math, known as STEM, subjects that are driving today’s high-technology world.

"Speaking with Siemens Technical Scholars and the educators who helped them learn their trades makes clear that these exceptional students are benefiting from a first rate education," said Joshua Wyner, executive director of the Aspen Institute College Excellence Program.

"Siemens Scholars are learning both technical skills and the kinds of critical thinking and communications skills that every college student needs to be successful in their life and career.  We all have a vested interest in helping more community colleges foster that kind of success."