February 23, 2017 - Thursday evening was a chance for Eastern Florida State College students to say thank you to the people who made it possible for them to achieve their dreams.

The EFSC Foundation hosted the Titan Scholarship Reception for donors and scholarship recipients for the 2016-17 academic year Fall and Spring terms at the Public Safety Institute building on the Melbourne campus. 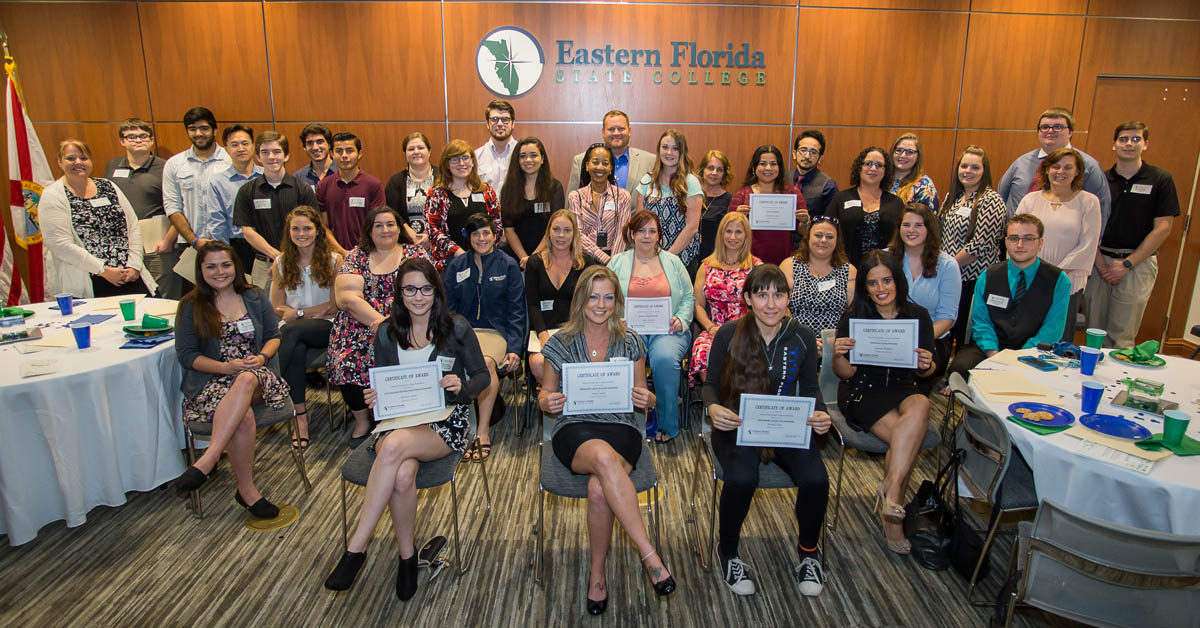 Recipients of scholarships funded through the EFSC Foundation gather at the reception in a show of gratitude.

About 350 students were awarded scholarships in the two semesters and many, like Kristen Chew, depend on that financial support.

Chew was close to being dropped after the Fall semester due to financial reasons until she received a scholarship funded by the Cape Kennedy Corvette Club.

“They basically saved me this semester,” Chew said. “Because of that scholarship, I could pay for my classes and I am doing well. I am now one step closer to being the first in my family to get a college degree.”

She just happened to sit at the same table as Charles Sikes and his wife Miriam who have been with the Corvette Club since 2000 and have made donations every year since then. 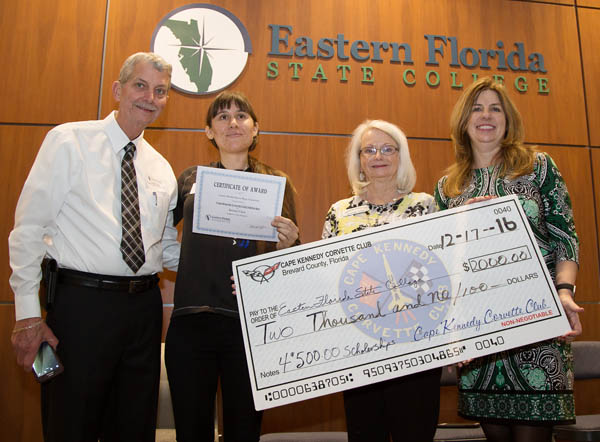 Charles Sikes represents the Cape Kennedy Corvette Club and accepts a personal "thank you" from Kristen Chew, a beneficiary of one of the club's scholarships. Also pictured: Miriam Sikes and the EFSC Foundation's Tonya Cherry on the right.

“I worked at a lumber yard and went to school at night to get my degree, so I know how hard it can be,” Sikes said. “But it is so nice to meet the students and they stay in touch with the club, writing letters of appreciation. It is really beneficial to everyone.”

“Find your passion — that is what I did when I was here,” Cullen said.

“This college is going to change you and you have been given such a gift. My hope is that each of you take it and run with it. I was so blessed and I treasure my time here and I hope you do too.”

Matthew Diriwachter, who is taking Criminal Justice classes at Eastern Florida State College, was happy that he had the chance to thank David Hill from Community Credit Union for his scholarship.

“The scholarship means a lot, I was working two jobs just to go to college my freshman year and this scholarship just takes all of that weight off my shoulders,” Diriwachter said.

“I thanked them like a million times. It means so much. And then to have my name called tonight was just so special.”

Hill said donating to the EFSC Foundation is something that the Community Credit Union has done for years.

“We support education and it was really nice to see a man working hard and it feels good to help someone,” Hill said.

The EFSC Foundation has provided more than $2.5 million in student scholarships over the past five years.

Visit easternflorida.edu/foundation or call (321) 433-7055 to learn more about the Foundation's mission.