8 AM, Thursday Update: Due to the impact of now Tropical Storm Ian on Brevard County, all EFSC classes, including online courses, are canceled today and through Friday, Sept. 30. All EFSC Campuses are closed, and all events canceled as well, from Wednesday through Friday. Students should contact their instructors for questions about the impact on class assignments. Review hurricane preparation tips. Updates will be shared here and via email, text and social media as needed. View our Student Services Guide for more information about the impact for on-campus and virtual student services.

February 21, 2017 - An Eastern Florida State College student has received a statewide honor for his achievements in the College's theatre program. 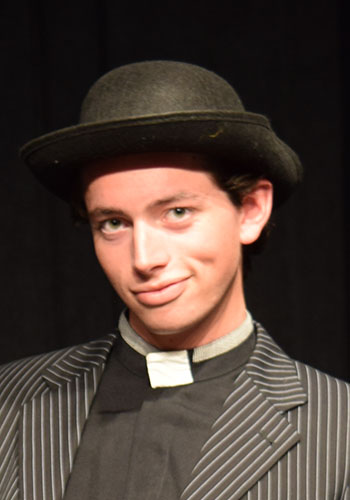 Nick Martin in costume during
rehearsal for the Performing and
Visual Arts Department's upcoming
production of "Anything Goes."

Nick Martin was named Theatre Division Student of the Month for January by the Florida College System Activities Association, which recognizes students for their accomplishments.

Martin was nominated by EFSC's Performing and Visual Arts Department on the Cocoa campus and Jeanine Henry, Director of Theatre Arts, who praised his work in several plays.

“Nick joined our program in August and has taken EFSC by storm. He has gotten involved in several facets of our program and takes advantage of all that EFSC has to offer,” said Henry.

Martin performed several roles in "Pinocchio" and led the cast in creating the physicality of the characters.

He has also served on the scenery committee and volunteered to act as stage manager for a Black History Month play to learn about all aspects of theater production.

“We have never had a student-driven project of this magnitude be presented at such a high level and with such success. Much of that success is due to Nick’s leadership of the project,” said Henry.

Martin was recently elected president of the Titans Theatre Club and is organizing its next project, "Jest Desserts." He also will appear in EFSC's production of the Cole Porter classic "Anything Goes" from March 17-19. For more information or to purchase tickets, visit the Performing and Visual Arts Department's event page.