February 7, 2017 – Chris and Elaine Larsen, the founders of Palm Bay-based Larsen Motorsports, Inc., inspired students on Tuesday with their rags-to-riches story as speakers in the Simpkins Entrepreneur Series, co-sponsored by EFSC and Florida Today. 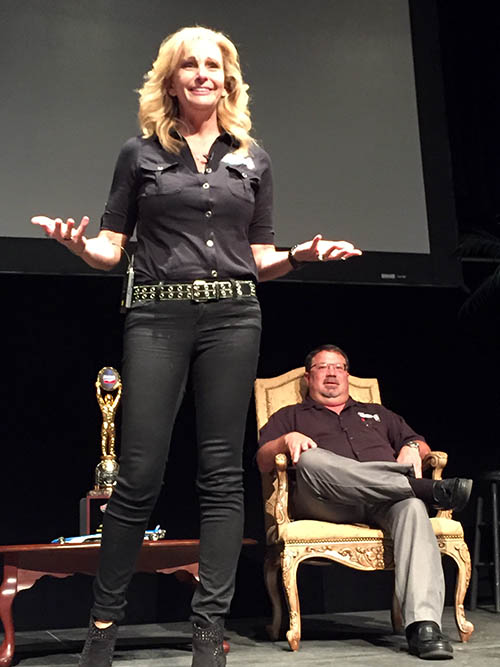 The Larsens described themselves as “a couple of farm kids from Michigan with a dream that turned into a multi-million dollar business” as they addressed a crowd of hundreds Tuesday at the King Center's Studio Theatre on the Melbourne Campus, the first of two EFSC appearances this week.

They will speak again Thursday, February 9 at 11 a.m. at the Bernard Simpkins Fine Arts Center on the Cocoa campus. The event is free and open to the public.

The couple’s competitive jet racing company is currently in its 16th season. Their high-performance vehicles, capable of accelerating from zero to 60 in seven-tenths of a second, were featured in a July 2016 episode of the CNBC television program “Jay Leno’s Garage."

“We never planned for our business to get as big as it is today,” said Chris Larsen of the company, which they originally operated out of their home. “It just naturally progressed.”

Elaine Larsen added: “We found a way to monetize our passion. We took what we love and brought it to the next level.”

Chris Larsen’s aerospace and motorsports background combined with Elaine Larsen’s 20 years of drag racing experience have since earned them two back-to-back world championship trophies. However, the true heart of the company lies in education.

Recognizing an opportunity to give back to the community, Larsen Motorsports offers internships to college students interested in business, communications, marketing and engineering. The hands-on, real world training they provide will help to create a new generation of drag racing professionals. Among them are students from EFSC.

“Our interns love that their experience is real,” said Chris Larsen. “Every nut and bolt they tighten will do its first job at 270 miles per hour. They truly have Elaine and the other drivers’ lives in their hands every single day.”

The Simpkins Entrepreneur Series, which is attended by students from EFSC as well as local high schools and middle schools, is named after College benefactor Bernard Simpkins, a highly successful Space Coast entrepreneur responsible for bringing some of the nation’s top business leaders to Brevard. The impact on the students is clear.

“We bring students here to inspire them to grow and reach beyond their own neighborhoods,” said Amanda Gayle, a teacher at Stone Magnet Middle School. “Seeing people who have achieved things opens doors for our students to become better people.” 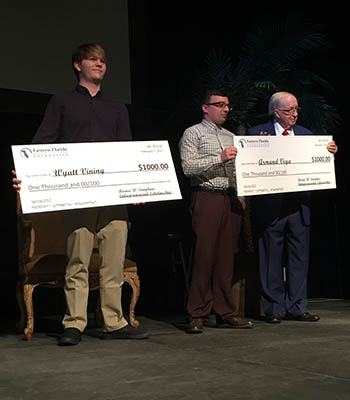 In conjunction with the series, Simpkins also awards $1,000 academic scholarships through the EFSC Foundation to qualified students with a demonstrated commitment to entrepreneurship. Tuesday’s recipients were EFSC students Armand Vega and Wyatt Vining, both of whom are pursuing degrees in Engineering.

“At some point in my life I will own my own company of some sort and do everything in my power to establish it as successful and responsible,” wrote Vining in his application essay. “The Bernie W. Simpkins Entrepreneurial Scholarship will go a long way toward helping me achieve my goals.”

“For me, learning doesn’t stop when I leave the classroom,” Vega wrote. “An education is the greatest gift someone can receive, and it is the kindness of those such as yourself that help make it possible. I can’t thank you enough for your generosity.”

Both scholarship recipients listened eagerly as the Larsens imparted advice on how to achieve their entrepreneurial goals.

“Don’t plan to start at the top,” Chris Larsen said. “Believe that you’re going to compete, and enter the industry humbly.”