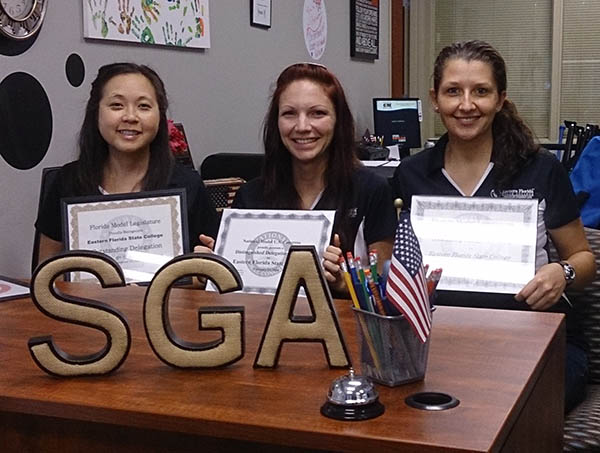 Participating students gained insight into the legislative branch of government while meeting other student leaders from around the nation.

Each played the roles of actual members of Congress, debating and voting on legislation.

“It was like a crash course in the U.S. legislative branch", said Carter, who won Most Distinguished Majority Whip.

“We were judged by how well we could stay in character and promote the kind of bill that the actual person would try to pass,” said Weatherspoon, who won Outstanding Representative Award and the Distinguished Majority Leader Award.

“I pretended to be a Republican Senator,” said Otto. “It was really intimidating at first, but soon I got into character and it was really cool.”

“I now have a better understanding of the legislative process and am bringing that back to the students at Eastern Florida,” said Carter. “We now use Roberts Rules to govern the proceedings of our SGA general business meetings. These are the same rules followed by Congress.”

“They really represented the college in an outstanding manner,” said Melissa Toepler, Director of the Cocoa Campus Office of Student Life. “They deserve recognition for their hard work and bringing home these awards.”