December 15, 2016 - Cheers and celebrations rang through Eastern Florida State College on Thursday as students marked the completion of degree and certificate programs during Fall Commencement.

Ceremonies were held at noon and 3:30 p.m. in the King Center for the Performing Arts on the Melbourne campus, with nearly 1,350 students eligible to graduate. 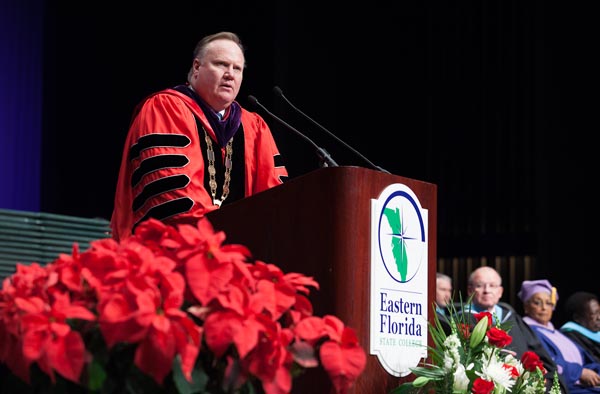 “I know the road that you have traveled has not always been easy. And as you look around at your fellow graduates, each has their own story to tell,” said Richey.

“For some, it was juggling a demanding job and family responsibilities that meant long days at work and even longer nights caring for children while completing class assignments. For others, it was confronting a past faced with difficult challenges but still having the courage to step forward by enrolling in college.

“Still others have returned from war with its traumatic effects, but refused to let anything stop them from achieving their goals.

“In meeting these obstacles, both large and small, none of you gave up, and your presence here today speaks to the strength of your character and the power of your dreams.”

Among those graduating Thursday were a mother-daughter team who both earned the prestigious Citizen Scholar honor by volunteering at least 300 hours through the EFSC Center for Service-Learning and Civic Engagement. 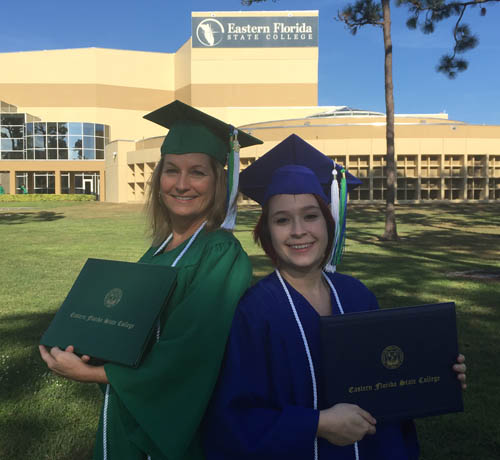 Dawn Atkinson Spaccio earned a Bachelor of Applied Science in Organizational Management and her daughter Alli Spaccio received an Associate in Arts degree and is now an English major at Stetson University.

“Graduating with my daughter Alli is indescribable; it’s another bond that keeps us so close," said Dawn Spaccio. "I am so proud of her and all her accomplishments – a true honor to walk across that stage with her. I guess you could say, with all I’ve guided her in and expected of her, I’ve walked the talk, and that is the best thing a mom could ever do."

Also graduating with a Dental Assisting A.S. degree was single mother Roxanne Canich who plans to return to EFSC and pursue an A.A. degree with her sights set on an eventual bachelor’s degree.

“I turn 40 next month, and am a single mom with two kids. One of them also attends here, the younger son will do dual enrollment next year so all three of us will be here,” said Canich.

“I feel like I gave an answer to a lot of people who did not think I could do this. I feel very confident now and very proud of myself for doing this.”

Both ceremonies were broadcast on WEFS-TV and streamed live via the College's YouTube Channel. Replays can be viewed at bit.ly/efscwatch 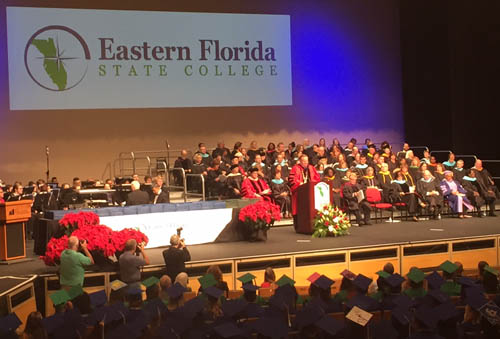 “I originally got my A.A. here and once I graduated from UCF with my Bachelor of Arts, I was looking for somewhere that offered cyber security and so I came back,” said Brian Austin Oullette, who graduated with a Network Systems A.S. degree and plans to move on to the EFSC Bachelor of Applied Science cybersecurity specialization.

“I really enjoy this college, the classes are smaller and so it is easier to have more hands-on experience and if you are having any trouble, the professors take the time to give you that extra help you need.”

Among those congratulating the college’s graduates was Florida Gov. Rick Scott who continued his tradition of encouraging students to stay in Florida and pursue jobs post graduation through a letter that will be sent to each graduate with their diploma.

Classes are available on all four campuses, at a new Patrick Air Force Base satellite location and online through eLearning.