November 11, 2016 - Flags fluttered and the somber notes of “Taps” echoed across Eastern Florida State College's Cocoa Campus on Friday as hundreds of veterans gathered to remember those who have served their country. 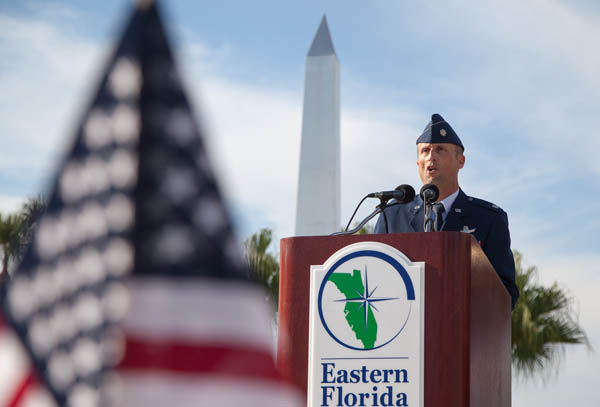 The 34th Annual “Massing of the Colors,” which is the largest Veterans Day event on Florida’s Space Coast, included veterans from World War II, Korea, Vietnam, Iraq and Afghanistan.

Among those who paid tribute was Jack Parker, the college’s Vice President for External Affairs, who thanked veterans and their families for their service and sacrifice.

He also announced the addition of a name to the college’s Wall of Honor, which lists 173 Brevard County residents killed in the line of duty since World War I: Reginald E. Johnson, who died in a training accident while a cadet at West Point in 1980.

Parker said that his parents – Eugene and Ionia Johnson – have done something “truly remarkable” in the years since they lost their son. 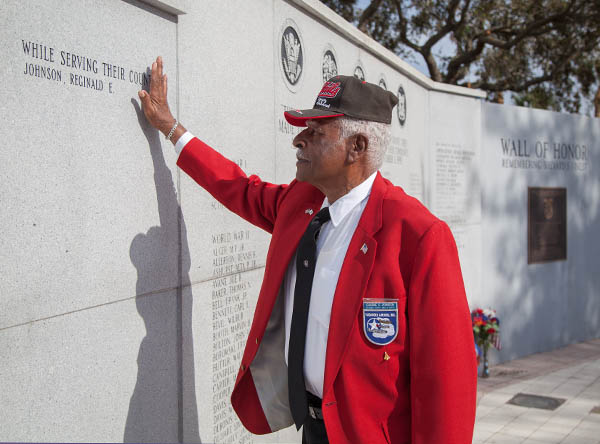 Eugene Johnson touches the engraving of his son Reginald Johnson's name which was added to the Wall of Honor at the EFSC Cocoa Campus Amphitheater.

They created the Reginald E. Johnson Foundation in his honor, and have raised $4.5 million that has been awarded in scholarships to 1,700 high school seniors to help them pay for college.

“Their work is a mission of love and remembrance that has helped put those students on the path to successful lives, and for that we should all be grateful,” said Parker.

The ceremony was held at the George F. Schlatter Veterans Memorial Amphitheater on the Cocoa campus and included dozens of veterans and civic groups.

More than 1,100 veterans are currently enrolled at Eastern Florida with the college’s Military and Veterans Service Center providing a wide range of specialized services to help them in the classroom and their personal lives.

For more information on the Center and its programs, visit www.easternflorida.edu/go/veterans