November 7, 2016 – The EFSC Performing and Visual Arts Department has received a prestigious Superior ranking and Community Service Award from the Florida College System Activities Association (FCSAA) for its production of “Pinocchio” by Greg Banks. 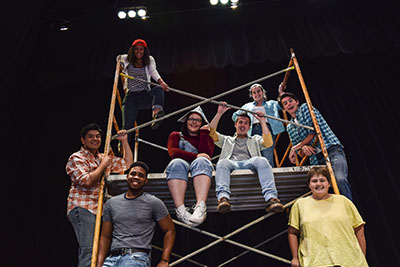 Each year, the Theatre Division of the FCSAA hosts a travelling theatre festival in which state college professionals visit one another’s productions to provide feedback. The feedback includes optional awards, such as the Community Service Award, as well as an overall ranking: Superior, Excellent, Good, Fair or Poor.

In addition to the recognition, EFSC drama students appreciated the opportunity to network with an outside professional in their field.

“Students commented that the oral feedback they received affirmed that they were doing something right," said EFSC Director of Theatre Arts Jeanine Henry. "It boosted their self-esteem, which gave them confidence in their performance. That is of enormous value. The respondent also spoke to the students about a life in the theatre, so they gained wisdom and insight from another theatre professional.”

The production, which played in the Simpkins Fine Arts Center on October 28 and 29, is the first EFSC show to receive a Superior ranking. In his report, FCSAA Respondent Jay Deen specifically praised the blocking, props and technical elements of the show, as well as the strong group dynamic of the cast.

“The ability to get a cast to become a true ensemble is a task, no matter what the experience level of the director,” wrote Deen. “Most times you just have to throw them together and hope for the best. This group of actors did a great job of playing as a unified team, telling a story that seemed to be made up on the spot.”

“It is rare that I have nothing bad to say about a production, said Deen. "There’s always something. But in this instance, I was thoroughly entertained right along with the kids in attendance.”