September 26, 2016 - The Eastern Florida State College women’s tennis team will now play on the national stage after making history over the weekend, winning both the singles and doubles titles at the ITA Florida Regional Championships. 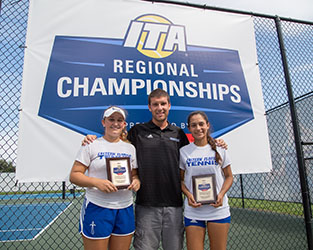 The tournament, which was held at the Titan Tennis Center on the Melbourne campus for the first time, was a three-day event culminating with the championship matches on Sunday.

Then she teamed with Titans freshman Josephine Karcher and won the doubles championship. It marked the first regional championship titles for Titan tennis players.

“It's incredible,” EFSC Titans women’s tennis coach Jerry Thor said of his team's big weekend. “I couldn't be more grateful to them for buying into the philosophy that we have here where we want to compete for regional and national championships.

“They've come out here and shown that they can do it. I'm really excited to see Luisa and Josie play on the national stage. … We'll have them prepared to make a run at a couple of national championships.”

The event will host the best players from Division II, Division III, NAIA and JUCO and the champions of the four divisions will play in a “Super Bowl.”

The winner of the Super Bowl will gain entry into the Division I USTA/ITA National Indoor Intercollegiate Championships Nov. 3-6, 2016 at the Billie Jean King National Tennis Center in Flushing Meadows, N.Y.