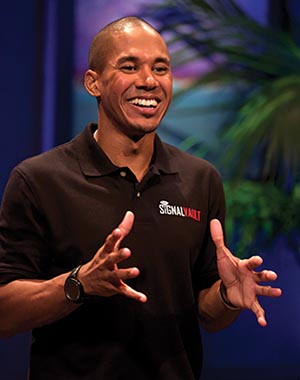 Chris Gilpin turned a $1 winning lottery ticket into a thriving high-tech start-up, then secured a $200,000 investment on ABC’s Shark Tank series to take his company to even greater heights.

Gilpin will bring his story of innovation and business savvy to Eastern Florida State College this month at the Simpkins Entrepreneur Series co-sponsored by EFSC and FLORIDA TODAY.

The presentations are free and open to students, faculty, staff and the public.

He launched his company in 2013 after winning $8,000 on a $1 Florida Lottery ticket. Last September, he secured a $200,000 investment on ABC’s Shark Tank after making his pitch to actor Ashton Kutcher and others.

His company, Signal Vault, produces a card-like device that fits in a wallet and is designed to block hackers from remotely scanning the electronic chips in today’s credit cards.

Known as RFID credit cards, they offer more security than older credit cards, but they can be scanned remotely by so-called crowd hackers using the right equipment, even if the card is in a wallet.

His device has appeared on the QVC Network and sold more than 650,000 units worldwide.

Gilpin, 34, of DeBary, Fla., earned his Associate of Arts Degree from Daytona State College in 2002, then transferred to the University of Central Florida where he majored in business.

The lecture series is named after Bernard Simpkins, a highly successful entrepreneur and Space Coast business leader who established the sessions that have brought some of the nation’s top business leaders to Brevard.