May 17, 2016 - An Eastern Florida State College security officer was honored Tuesday for quick action that helped save the life of a heart-attack victim.

Officer Jonathon Hurley was patrolling the Cocoa campus on March 26 when he responded to an emergency call from the Cocoa Campus YMCA. 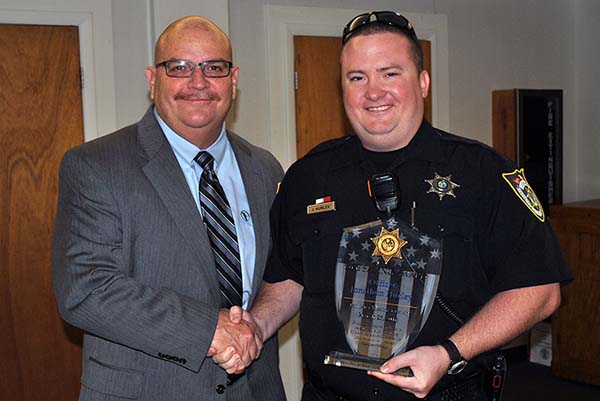 Hurley, who is certified in CPR and Automated External Defibrillator (AED), raced to the scene and found an elderly man lying unresponsive next to the pool. He was not breathing and was receiving CPR and oxygen. An AED was close by and had been used.

A physician who treated the man said he survived because of the CPR and AED shocks that were given to him.

“Only two out of 12 people survive such an incident,” said Brandon Ballard, YMCA Operations Director. “Thankfully, due to the fast actions of everyone involved, this man is still with us today. In fact, I spoke with him recently and he is back swimming.”

In recognition of his actions, college Security Chief Joe Ambrose presented Hurley with a certificate and lifesaving plaque during a ceremony. He also received a lifesaving ribbon for his uniform, the first of its kind presented by Eastern Florida.

“It’s not every day a security officer gets to save a life,” said Ambrose. “Not everyone is capable of stepping up the way Officer Hurley did and it is very important to me that he receives the recognition he deserves.”