May 13, 2016 - Eastern Florida State College was represented in a major way Friday when the Space Coast Sports Hall of Fame inducted its Class of 2016. 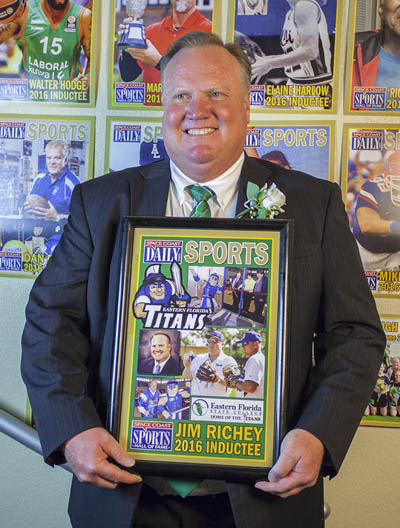 The college’s 11 varsity programs are the most in the 24-member Florida College System Activities Association.

A number of Eastern Florida games are broadcast live on WEFS-TV to sports fans throughout Central Florida and streamed nationally via webcast on the college's sports website.

Richey has also constructed an athletic complex on the Melbourne campus with new or upgraded facilities for soccer, tennis, softball, baseball, basketball and volleyball.

Perhaps his biggest sports-related achievement is a partnership with the Orlando City Soccer Club to base its United Soccer League team — called Orlando City B — at the Titan Soccer Complex.

Richey called the induction a very humbling experience because the Hall of Fame “includes so many remarkable people.”

He also said he has expanded the college’s athletic programs with two thoughts in mind.

“First, I believe that college athletics can open the door to higher education for students who might not otherwise have the chance to attend, making a significant difference in their lives, allowing them to pursue successful careers, raise strong families and achieve lofty dreams,” he said.

“Second, I also believe that our athletic programs benefit the entire community by showcasing some of the best athletes in the nation. That can inspire our youth to set their own goals, and at the same time provide an important boost to our local economy through increased spending by fans at local hotels, restaurants and other businesses.” 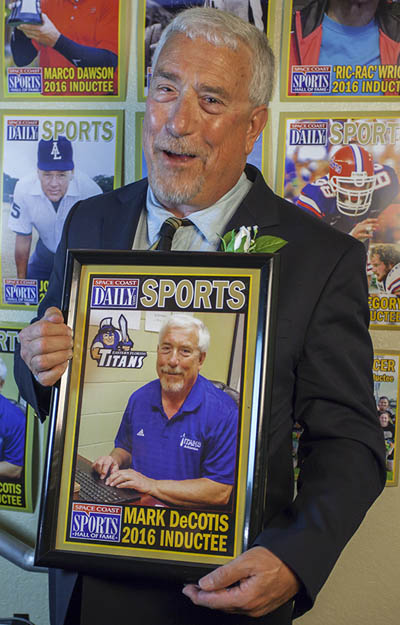 The school started a track team during Smith’s second year and he jumped right in, becoming a state champion with a high jump of 6’3” and a long jump of 20’8”.

Hall of Fame membership is nothing new to Smith, a pioneer in the implementation of gender equity in education and sports and a member of the FHSAA, FLCCAA, Collegiate Press Association and the Community Colleges Men's and Women’s Basketball Coaches’ State Halls of Fame.

Another inductee was Mark DeCotis, the college’s Manager of Athletic Communications, who was enshrined in the Sports Journalism category.

DeCotis’ career spans more than 40 years and includes work as an award-winning reporter and editor at Florida Today, and covering EFSC’s athletic programs from 2012-16.