May 12, 2016 - Stories of inspiration and goals achieved filled the halls Thursday as Eastern Florida State College students received their diplomas during the first of two Spring Commencement Ceremonies.

About 2,000 students were eligible to gain their degrees during two ceremonies at the King Center for the Performing Arts on the Melbourne campus, which was filled with cheering families and friends. 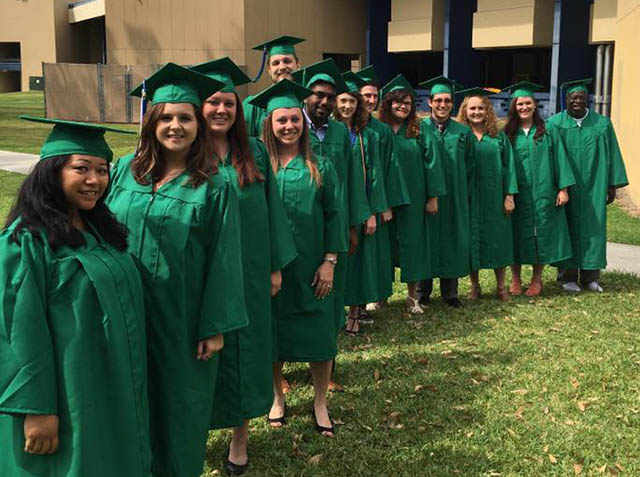 A noon ceremony featured students from the Titusville and Cocoa campuses, who heard college President Dr. Jim Richey laud their accomplishments and offer thoughts on their road ahead.

“Today we know, more than ever, life is about rapid change, especially in our economy and with it the needed ability to adapt to that change. Studies show that college graduates can now expect to have 10 to 15 jobs during their career, and some will never work in the field of their major,” said Richey.

“That means success will come to those who are open and excited about learning new skills, and who cultivate a mindset that allows them to eagerly seize different opportunities in a constantly changing workplace.

“So be quick on your feet, embrace innovation, and be creative. Stay on the cutting edge of whatever path you choose, and do not be afraid to take a leap of faith.

“In fact, you should never be afraid to fail. Life is full of trial and error, and sometimes the most important lessons we learn come from our mistakes and detours.

“If you do not get the job you want, or if the job you have is not fulfilling your expectations, do not lose heart. Instead, reboot and press on with an undiminished confidence in yourself,” he said.

Among the graduates listening was Susan Slaton, 51, of Port St. John, who returned to school after more than 30 years and earned her Associate in Arts Degree.

Slaton and her family had to sell a car to help pay for classes, and her dedication inspired her son, Randy Randall, to return to school as well.

He also graduated Thursday with a Certificate in computerized machining, making it a special day for the entire family.

“The activities I was involved in and the help I received from people at the college cemented for me that I could do it,” said Slaton, who also earned a prestigious Citizen Scholar designation for volunteer work in the community.

“I learned that you never give up, you’re never too old, and that you should always be positive. If you do all that, you can get where you want to go.”

The ceremony also featured members of the first graduating class in the college’s new Bachelor’s Degree program in Biomedical Science.

They included Joseph Hilde, 24, of Merritt Island, who previously received an Associate in Arts Degree at Eastern Florida.

“The program offered me a great opportunity to study locally in an area that always interested me,” said Hilde. “It was challenging and I really enjoyed it.”

Hilde wants to attend medical school and become a neurologist specializing in Multiple Sclerosis. His inspiration are two members of his family fighting the disease.

A fellow Bachelor’s Degree graduate in Biomedical Science was Summer Towne, 20, of Mims, who wants to pursue a career in veterinary medicine.

“The program has been extremely worthwhile, allowing me to learn a great deal about research and connecting me to mentors,” said Towne, who earlier earned an Associate in Arts Degree from the college.

Through the program, Towne has worked with an Ocala research firm studying horse diseases in a project she hopes will help her get into veterinary medical school.

Another graduate was Samantha Cooper, 28, of Titusville, an Air Force veteran who earned an Associate in Arts Degree along with a Citizen Scholar honor for her community work.

“I’m really humbled by the whole situation,” she said. “I love helping other people learn what they can do to help their community.”

The noon ceremony was televised live on WEFS-TV and streamed live via the college’s website. Another ceremony at 3:30 p.m. will feature graduates from the Melbourne and Palm Bay campuses. It will also be broadcast live on TV and via webcast. Replays of both ceremonies can be watched online at livestream.com/efsctitans

Among those congratulating the EFSC graduates was Florida Gov. Rick Scott who in a letter given to each graduate with their diploma encouraged them to explore career opportunities in Florida.

The graduates joined more than 95,000 others who have earned their degrees from the college since it began in 1960.

Classes are offered on the Titusville, Cocoa, Melbourne and Palm Bay campuses and online.