May 3, 2016 - The needs of a community are as large as the community itself. There are the homeless to shelter, the hungry to feed, the aged to comfort.

Those are among the valuable lessons taught by Eastern Florida State College’s Center for Service Learning and Civic Engagement, which gives students the chance to get involved in the community and witness life from a different perspective. 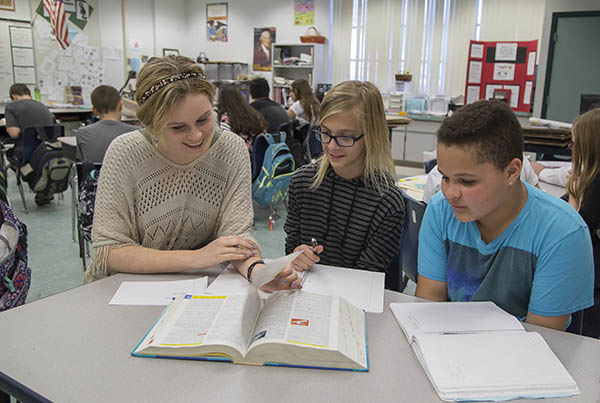 An EFSC student tutors at Sherwood Elementary near the College's Melbourne Campus through a volunteer position coordinated by the Center for Service Learning and Civic Engagement.

The center will hold its annual awards ceremony May 10 at the King Center for the Performing Arts on the Melbourne campus, recognizing more than 4,200 students who have volunteered 190,000 community service hours during the 2015-16 academic year.

In addition, 33 students will graduate this academic year with the prestigious Citizen Scholar distinction, each having performed 300 hours or more of community service.

“Service Learning is among the most important and successful programs we have at Eastern Florida,” said college President Dr. Jim Richey.

“Students learn the Golden Rule in a very personal way: Do unto others as you would have them do unto you. It’s a deeply meaningful experience that they carry for the rest of their lives.”

Among the students to be recognized will be Allaya Goyco, 18, of St. Cloud, who worked with the Police Athletic League on projects that included providing toiletries and other necessities to the homeless.

“Compassion is a very important thing to learn and give back to people,” said Goyco, who will graduate as a Citizen Scholar with an Associate in Arts Degree. “Even a kind word and a smile can help. I believe that it’s more important to live a selfless life than a selfish life.”

Goyco's next stop is the University of Illinois-Chicago to study biomedical science.

Another honoree will be Samantha Cooper, 28 of Titusville, a Citizen Scholar who will graduate with an Associate in Arts Degree.

An Air Force veteran, she worked with the North Brevard Animal Shelter and spearheaded the Redlands Rockpit Abandoned Dog project to save stray animals.

“People need to be more involved in their community and be part of something bigger than themselves,” she said. “I love helping people learn what they can do to help their community.”

Cooper is hoping to attend the University of Florida to study veterinary medicine.

Eastern Florida has one of the top Service Learning programs in the nation, having been named to the White House’s Higher Education Community Service Honor Roll nine consecutive years.

It has 350 partner organizations and agencies in Brevard County, and has increased diversity and multi-cultural topics in its courses to broaden the students’ outlook.

In all, more than 80,000 students have contributed about three million hours of community service since the program began in 1988.

“The program shows how deeply entrenched the college is in the community, and the central role the community plays in educating students,” said Richey.

“We’re fortunate to have that connection and it’s a bond that gets stronger every year.”