April 4, 2016 - A new Student Union that will be a hub of student activity and play an important role in providing career guidance services has been approved by state lawmakers for construction on the Melbourne campus.

The building will be the third new structure to rise as part of the Melbourne campus expansion plan, providing more momentum to a project that is transforming the site into a 21st century center of higher education and workforce development. 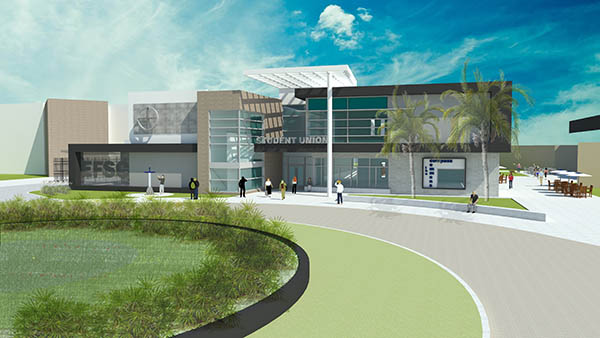 This artist rendering shows a proposed design for the new EFSC Student Union on the Melbourne Campus.

The Florida Legislature and Gov. Rick Scott recently approved $9.5 million for the Student Union in the state’s 2016-17 fiscal year budget that begins July 1.

It will be located on the east side of the campus adjacent to the Titan Athletic Complex.

“We’ve launched more than 30 new academic programs the past four years to give students opportunities in some of today best career fields, focusing on business, health care and computer technologies.

“The new Melbourne campus buildings are providing room for those programs with state-of-the-art labs and other specialized facilities that make for a great learning experience.

“With the Student Union, we can take the key step in giving students a first-class education.”

The Student Union will comprise 27,000-square feet with space for a variety of student services, including student government, clubs and activities, computer, study and advising rooms and a food court.

It will also house services for the Career Planning and Development Center where students get assistance to select the career path that’s best for them, learn job-hunting skills, participate in job fairs, gain internships and meet with recruiters from business and industry.

Work to design the Student Union is expected to begin soon. No construction date has been set.

The Public Safety Institute opened its doors in 2015 and is home to a Law Enforcement Academy, Corrections Academy, EMT and 911 Operator training and studies in other criminal justice fields.

The Health Sciences Institute is currently under construction and scheduled to open in January 2017. It will house 12 healthcare programs that include Bachelor Degrees, Associate Degrees and Certificates.

Future plans also call for construction of a Center for Innovative Technology Education building that would educate students for the aerospace, aviation, digital technology and advanced manufacturing industries.