February 1, 2016 - Steve Charpentier, a former chair of the Eastern Florida State College Board of Trustees, has been honored for his service in helping transform EFSC into a four-year institution. 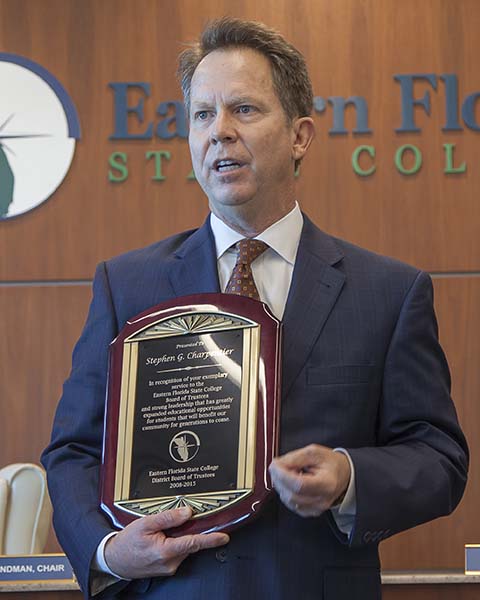 Charpentier received the recognition Monday during a Board of Trustee meeting where current Board Chairman Alan Landman lauded his leadership during a key time in the college's history.

"Through his foresight and leadership, he played a central role in our transformation from Brevard Community College to Eastern Florida State College, "said Landman.

"The many advances we have made and continue to make stem from his unwavering support."

The college launched 30 new programs largely in Business, Health Care and Computer Technologies during Charpentier's tenure on the board, which ran from 2008-2015.

They include the first Bachelor's Degrees in the college's history.

Some 1,000 students are currently enrolled in 10 bachelor degree tracks, providing an affordable and convenient way for them to advance their education and careers.

As such, the programs are meeting a critical need in the community.

Charpentier also helped oversee a major expansion of the Melbourne campus and upgrades on other campuses that are part of the college's master plan to provide facilities to meet workforce needs for decades to come.

The new Melbourne campus buildings include a Public Safety Institute that opened in 2015 and new Health Sciences Institute that's under construction and scheduled for completion later this year.

"In all, the strength of the college's position in our community and region, and our ever expanding educational mission, can be traced to Steve and others, including all of you trustees sitting up here with me today," said Landman.

"Steve's passion, dedication and tireless public service are a model for others to follow."

Charpentier is a Melbourne attorney who twice served as chair of the Board of Trustees.

He is a former president of the Brevard County BAR Association, and a graduate of Brevard Community College, the University of Central Florida and the Florida State University College of Law.