October 28, 2015 - Mystery author and Alabama native Bill Fitts will talk about the craft of writing and read from his latest book “Who Needed Killing?” on Eastern Florida State College’s Cocoa campus Tuesday, November 3. 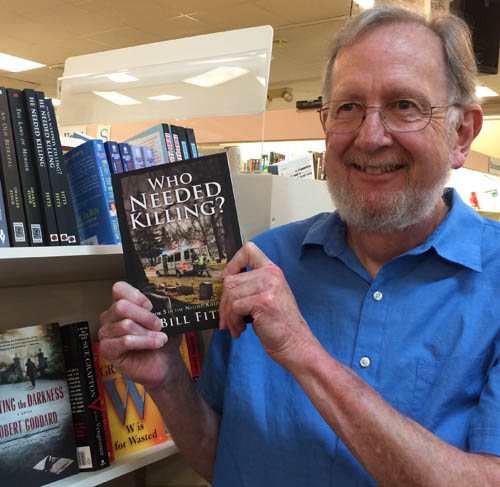 The book is the fifth in the popular “Needed Killing” series by Fitts. Fitts and his wife, Anne Gibbons, published the books in eBook and in paperback form. The books are described as “cozy mysteries with a Southern flair.”

Fitts, a former systems administrator, began writing full-time in 2011 after a tornado swept across the South, destroying much of the neighborhood where he and his wife lived in Tuscaloosa, Ala. That led Fitts to reconsider his goals and pursue his love of writing.

Now, over age 60, he says he may have an even greater appreciation for his craft than he would have if he were younger.

In 2012, the husband and wife team collaborated on a 30-minute screenplay based on Fitts’ first novel. The script was chosen by Emmy-award winning director Tom Cherones of “Seinfeld” and “NewsRadio” fame for his film production course in the University of Alabama’s Department of Telecommunication and Film. Shot on location in Tuscaloosa, the film was produced by Cherones’s students.

Fitts will discuss the process he uses in writing books and the independent publishing landscape. His talk will be followed by a question and answer session that will include changes in publishing, the rise of e-books, the editing process, and the mystery and fantasy genres.

During the event, students can learn about opportunities to study literature and pursue their own love of creative writing through courses offered on the Cocoa campus. The Writers’ Haven, an EFSC student club, will provide information about upcoming club-sponsored events and opportunities.

Admission to the event is free. Refreshments will be served and there will be door prizes.