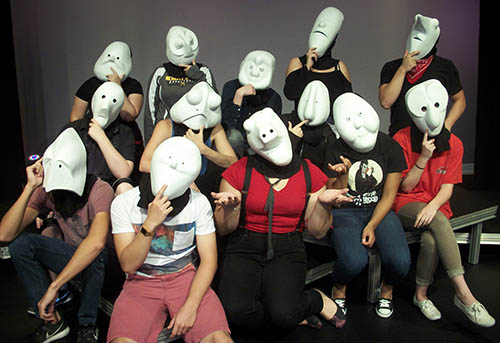 EFSC theatre program students will use unique masks as
they present the Contitution Day performances.

The play is composed of short scenes based on the First Amendment.

Two performances have been scheduled:

Performances will be held on the Cocoa Campus in the Simpkins Fine Arts Center, Studio Theatre (Bldg. 4).

"Some of the scenes convey a literal interpretation of the First Amendment, while others are more quirky and fun, such as using masks to convey their ruminations about the first amendment and how it protects freedom of religion and assembly, speech, the press and the freedom to petition the government about grievences," said Jeanine Henry, Director, EFSC Theater Arts Program.

The U.S. Constitution was signed on Sept. 17, 1787 and then amended, first through the Bill of Rights, which includes the first 10 amendments.

Immediately following both performances, attorney Robin Cornell will lead a discussion on the First Amendment with the cast and audience.

Performances are free to the public.