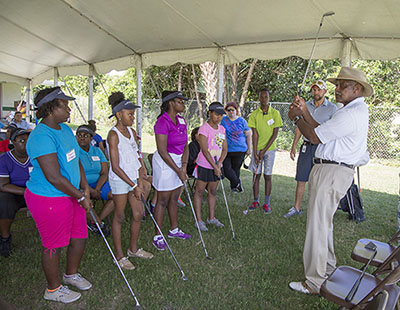 The 23rd Annual camp drew 67 golfers ranging from 10 to 16-years-old. Some had never picked up a club before. Some played on their local high school golf team.

No matter what the experience level, the message was still the same.

“If you get started now, you can play the rest of your life,” EFSC coach Jamie Howell said. “If you wait, it only gets more difficult. And if you do this with a buddy, it’s a better game. People think golf is a loner game, and it can be, but if you have a buddy to do it with (it can be a lot more fun).”

The first camp was held in 1992 under the guidance of former President Dr. Maxwell King with the assistance of Wilson and Scott, a pair of African American professionals. It continues to this day, with free admission to all campers, thanks to the support of EFSC President Dr. Jim Richey and the Board of Trustees. 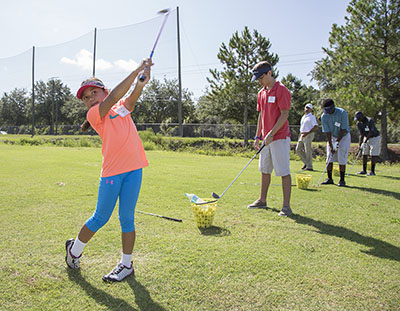 Attendees are instructed not only in the fundamentals of the game, but also learn a few life lessons along the way thanks to the instruction of Howell, Roosevelt Jackson, Isaac Johnson and other members of the college community.

Jackson, who stressed sportsmanship and respect to his charges, has been playing golf since 1964.

“When I was growing up, there weren’t a lot of opportunities for black kids to play golf,” he said. “I learned to play and I said I would make sure that any other kid, not just black kids, could learn if they wanted to.”

Anne Gannon, who played on the Futures Tour in 2004 and now teaches accounting at the school’s Melbourne campus, is serving as an instructor for the first time at this year’s camp.

Not only did she see it as a great opportunity for members of the community to get exposed to the game of golf, but she was especially pleased to see a number of young female attendees at this year’s event.

“I just thought it sounded like a great thing to have,” Gannon said. “I went to golf camp when I went to a kid. Those were some of my best summer memories. Hopefully, they have the same experience.”

Who knows, maybe one day, someone who attended the camp will come back and tell the story of just how much they got out of it. 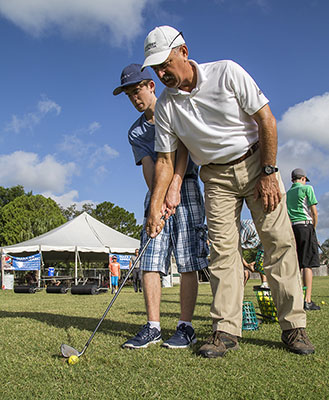 “That’s the part of the job nobody will tell you about, but probably the most gratifying part is when they’ve grown, maybe moved away and gone to college and then come back to see you some years later,” Howell said.

“(They tell you) they really enjoyed that. At the time, they didn’t realize what it was all about, or what they were doing, but they get it now. That’s the beauty of it right there.”

It might also inspire some people to want to give back to the community, just as their instructors are doing. That’s why Howell wants to stress to the attendees just who the camp namesakes were and what they meant to the community.

“It’s important to me that they recognize who Henry Scott and P.J. Wilson were, because they’re not just two names on a banner,” Howell said. “What those two guys did … they helped tons of kids, unsolicited. They saw a kid and thought, ‘Hey, we can guide them a little bit.’

“The two of them gave untold amounts of their time to this. To me, you can’t let that go by the waste side without passing it along. One day these folks will be the adults. One day, they’ll be taking care of youngsters.

“Hopefully, they’ll recognize, ‘Hey, you know, when I was a kid, I had this opportunity. We need to make sure these kids today have that.’”