April 21, 2015 - The provost of Eastern Florida State College’s Melbourne campus has received the top national honor from Phi Theta Kappa for her outstanding efforts to promote the organization’s goals. 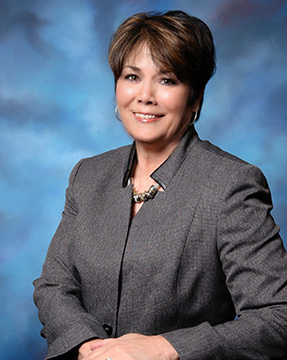 Provost Sandy Handfield received the Shirley B. Gordon Award of Distinction, which was announced April 18 at the group’s annual convention in San Antonio, Texas.

Several other leaders in higher education across the U.S. were also honored with the award.

“Provost Handfield has spent her career dedicated to our college and students, and this award reflects the energy she brings to the job every day,” said college President Dr. Jim Richey.

“She’s an excellent educator who always goes the extra mile to help students succeed. We’re all very proud of her.”

The organization cited Handfield for her initiatives “to build the characteristics of a leader today and filling up their toolboxes’ with traits they will need for the future.”

She works with students one-on-one, serving as a mentor and sounding board for their ideas and creating an environment where they can connect with their community.

“One of the best ways to encourage student success is by empowering them to make informed decisions,” said Handfield. “I love working with them and often learn more than I teach.”