April 7, 2015 - Despite beginning to lose his sight at a young age, and going blind by age 29, Jim Stovall soared to remarkable heights as an internationally known businessman, humanitarian and author. 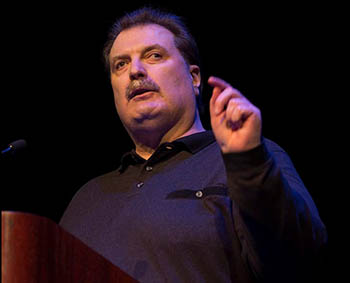 Using a blend of humor and heart-tugging anecdotes, Stovall told his story titled “Yes You Can”- which he has shared with millions of people worldwide - on Tuesday as part of the Simpkins Business Seminars for Entrepreneurial Development at Eastern Florida State College.

Speaking at the King Center for the Performing Arts on the Melbourne campus, Stovall stressed two things:

“You have one and only one God-given right in this world and that’s the right to choose,” he said. “You are where you are because that’s where you chose to be.”

His second truism: “You are one quality decision away from changing your life.”

Stovall will share his message at a second appearance on Wednesday, April 8 at 10 a.m. in the college's Simpkins Fine Arts Center, Building 4 on the Cocoa campus at 1519 Clearlake Rd.

The most poignant moments of Stovall’s presentation involved him recounting his work with a blind, physically challenged four-year-old boy named Christopher in Oklahoma after he learned he was losing his own sight.

Stovall worked with the boy, who could neither tie his shoes nor climb stairs, for three years, initially overcoming the youth’s insistence of “no I can’t” when it came to performing the tasks.

A few years later, the boy wound up helped Stovall overcome his own doubts when he became blind.

The saga ended with Stovall graduating from college and Christopher climbing three flights of stairs, sitting on the top stair and tying his shoes.

Christopher died of a brain tumor at age seven.

“That’s the person that impacted my life the most,” Stovall said. “When it comes to that big dream, that calling inside of you the answer is always ‘yes you can.’ “You change your life when you change your mind."

His many accomplishments led Steve Forbes, president and CEO of “Forbes Magazine”, to call Stovall “one of the most extraordinary men of our era.”

Stovall was a national champion Olympic weightlifter, is president of the Emmy Award winning Narrative Television Network and author of the best-selling book “The Ultimate Gift” that was made into a movie starring James Garner and Abigail Breslin.

Stovall's television network adds narration to describe the visual elements in television and movies so they can be enjoyed by the visually impaired. 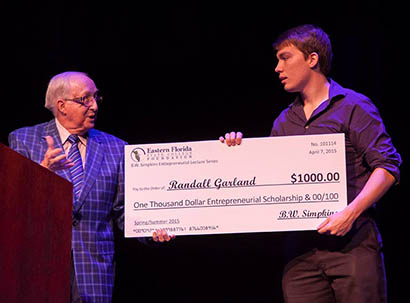 The President’s Committee on Equal Opportunity has selected Stovall Entrepreneur of the Year, and he was chosen as the International Humanitarian of the Year, joining former President Jimmy Carter, former First Lady Nancy Reagan and Mother Teresa as a recipient of the honor.

“Listening to Jim Stovall is an opportunity to hear from someone who has broken down every barrier in his life and achieved success at every turn,” Eastern Florida President Dr. Jim Richey said in his introduction. “It’s a story of courage and inspiration that can help people reach their goals, and is especially valuable to students who are striving to overcome challenges in their lives.”

The Simpkins Seminars are named after Bernard Simpkins, a former member of Eastern Florida State College’s Board of Trustees who established an endowment to create the sessions that have brought some of the nation’s top business leaders to the college.

As part of Tuesday’s program Simpkins awarded the $1,000 Bernie W. Simpkins Entrepreneurial Scholarship  to Eastern Florida student Randall Garland, an A.A. degree student on the Palm Bay campus and an entrepreneur in his own right who began a board game company.