March 19, 2015 - March Madness is here and there’s a new way to experience the fun and excitement of the NCAA Men’s Basketball Championship:

Watch the Final Four outdoors on the new video board at the Titan Soccer Complex on Eastern Florida State College’s Melbourne campus. 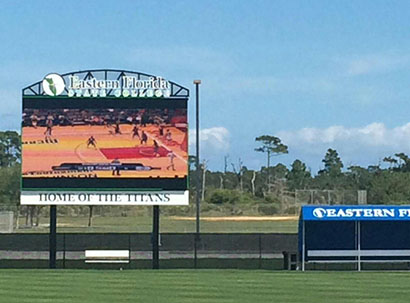 The college is opening the complex to students, college employees and the public for the free event on Saturday, April 4 starting at 5:30 p.m.

CBS will broadcast the two semi-final games at 6 p.m. and 9 p.m. from Lucas Oil Stadium in Indianapolis with the winners playing for the national championship April 6.

Fans can tailgate in the parking lot, grab snacks at the concession stand and sit in the stands to watch the games. Alcoholic beverages are prohibited at the site and anywhere on campus.

The event is a great way for families to enjoy the tournament and see the college’s growing athletics complex that contains new facilities for soccer, tennis and an upgraded baseball field.

“Athletics is an important part of the collegiate experience at Eastern Florida and we want everyone in the community to come and enjoy one of the best sporting events of the year,” said Eastern Florida President Dr. Jim Richey.

“There’s nothing like the Final Four — so bring friends and the family for an evening of great basketball and good times.”

The soccer complex is located on the east side of the Melbourne campus at 3865 North Wickham Road Melbourne, FL 32935.

There’s plenty of parking available next to the complex and at the adjacent King Center for the Performing Arts.