February 24, 2015 - A pep rally for Eastern Florida’s state tournament-bound women’s and men’s basketball teams will be held at 11:45 a.m. on Tuesday, March 3 at the Titan Field House (gym) on the Melbourne Campus. 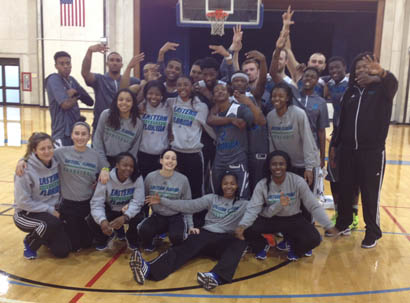 The women depart for the tournament in Ocala at 12:30 p.m. Tuesday right after the rally and the men at 4:30 that day.

The women will compete in the Florida College System Activities Association/NJCAA Region 8 Tournament at the College of Central Florida in Ocala for the first time since 2003 while the men will compete for the third straight season.

Also the teams will be introduced and recognized.

The women play their first tournament game in the quarterfinal round at 8 p.m. Wednesday, Mar. 4 against either Tallahassee Community College or Gulf Coast State.

The semifinals for women and men are Friday, Mar. 6 and the championship games, which reward the winners with a trip to the NJCAA Division I National Championship tournaments in Kansas, are Saturday.

The state tournament games will be streamed live at ihigh.com/njcaaregion8