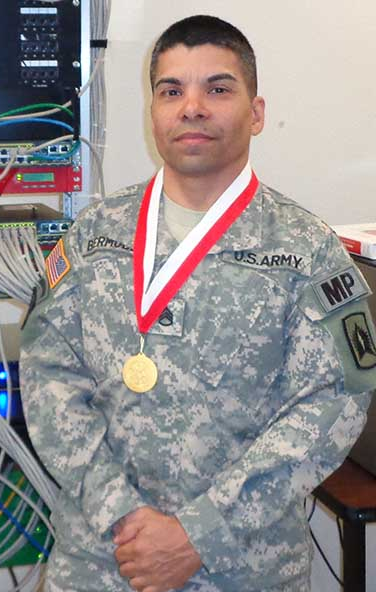 He has fought in two wars as a member of the U.S. Army and Marine Corps, helped hurricane-stricken residents in Florida and is also continuing his education at Eastern Florida State College.

Bermudez was recently recognized for his service by Gov. Rick Scott when he received the Governor’s Veterans Service Award that is given to honor Florida veterans.

The award was presented during a Jan. 16 ceremony at the National Guard Armory in Melbourne where Scott also cited 120 other veterans for defending the nation.

“It was very humbling for the governor to spotlight me with all of the others present,” said Bermudez. “I’m very thankful for the opportunity to serve this country and this state.”

Bermudez, who is studying for an Associate in Science Degree in Cyber Security on Eastern Florida’s Palm Bay campus, serves in the Army National Guard.

The Palm Bay resident is a veteran of the Gulf War in 1991 and two deployments during the Afghanistan War from 2008-9 and 2013-14 with a military police unit.

He has also aided Florida residents during hurricanes and wildfires that have hit the state.

Scott praised Bermudez for his exemplary leadership, saying while overseas he performed in positions normally held by soldiers of higher rank.

“Staff Sgt. Bermudez’s unwavering dedication to duty to both the mission and his soldiers has earned him the trust and respect of every member in his platoon as well as that of the 715th Military Police Company as a whole,” said Scott.

“In addition to the overseas missions, he also answered the state’s call in support of numerous hurricane and wildfire relief missions as well as additional duties in support of the Republican National Convention in Tampa just prior to his most recent deployment overseas.

“Staff Sergeant Bermudez truly exemplifies the meaning of citizen soldier and is an outstanding role model for his soldiers to emulate.”

Bermudez is among about 800 veterans and active duty military members studying at Eastern Florida.

The college’s Veterans Resource Center provides a range of services to help them in the classroom and their personal lives with offices on the Cocoa and Melbourne campuses.