January 15, 2015 - It’s a simple equation that students should know:  Ride the bus free. Save money.

That was the message Thursday during Space Coast Area Transit’s 2nd Annual Resolve to reThink Your Commute Day kick-off at the King Center for the Performing Arts on the Melbourne campus. 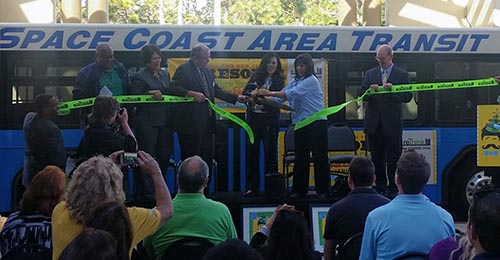 The campaign’s goal is to encourage people in Brevard County to reconsider their transportation options, including riding buses, carpooling and vanpooling, biking, walking and telecommuting.

Eastern Florida students currently ride the bus free thanks to a funding agreement between the college and the agency that was renewed Thursday.

Students took nearly 147,000 trips on buses under the plan last year, putting dollars in their pockets instead of the gas pump.

Bus stops on the Titusville, Cocoa, Melbourne and Palm Bay campuses are convenient, dropping off and picking up students just steps away from their classes.

Ancel Robinson, president of the Melbourne campus Student Government Association, said he is one of many students who would be lost without the free bus rides.

"I have been riding the bus from my home in Melbourne to the Melbourne campus for more than five years as I’ve worked to change careers and pursue a Bachelor’s Degree in Business Management,” he said.

“It helps people like me get to places they could not otherwise reach such as work or school,” he said. “That’s why I’m a strong believer and supporter of public transportation.”

Sandy Handfield, the Melbourne campus Provost, said the money students save through free ridership allows them to “pay bills, take another course or save for the future.”

“For countless students, riding the bus free is nothing less than a lifeline to continuing their education and advancing their careers,” she said.

“That makes the college’s partnership with Space Coast Area Transit an indispensable part of higher education and a great benefit to our entire community.”

The kickoff was followed by events on all four campuses that focused on coordinating carpools and vanpools, and registering commuters for reThink’s Emergency Ride Home program.

Eastern Florida students can ride the bus free by picking up a special sticker from any campus library or cashier’s office.

Once placed on a student ID card, it allows them to ride buses free.

The Resolve to reThink Your Commute campaign is led by reThink, a program of the Florida Department of Transportation.